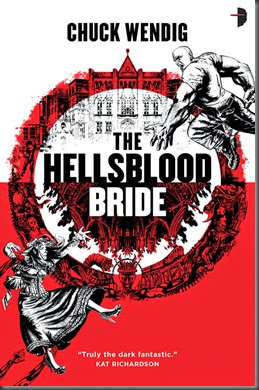 I still haven’t read as much of Chuck Wendig’s work as I would like. Not only have I enjoyed what I have read, but Angry Robot have been commissioning some truly amazing covers for his books (see, for example, the Miriam Black books – stunning jackets). In January 2015, Angry Robot will be publishing the second novel in Wendig’s Mookie Pearl urban fantasy series, The Hellsblood Pride. The cover – by the uber-talented Joey Hi-Fi – is to the right, and the synopsis is below:

Father, barkeep, former Mafioso, ruler of his subterranean crime-kingdom. The Organization is back, and they’ll do anything to get Mookie on board, but Mookie has gone legit, and it’s taking every ounce of effort for him to keep his new bar from crashing and burning.

To top it all, his daughter is missing, and when Nora’s not in plain sight, that’s usually a sign of bad things to come! On one hand, the Organization. On the other, Nora.

Why can’t Family ever be easy…?

The first in the series, The Blue Blazes was published in May 2013. You can find out more about Wendig’s various writing projects by visiting his website and following him on Twitter and Facebook.