Mini-Review: “The Owl Who Liked Sitting on Caesar” by Martin Windrow (Bantam Press) 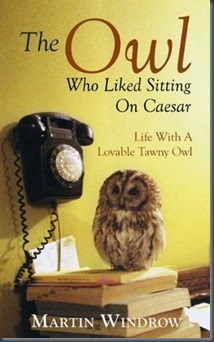 An endearing memoir of one man and his owl

When author Martin Windrow met the tawny owlet that he christened Mumble, it was love at first sight. Raising her from a fledgling, through adolescence and into her prime years, Windrow recorded every detail of their time living together (secretly) in a south London tower block, and later in a Sussex village. This is the touching, intriguing and eccentric story of their 15-year relationship, complete with photographs and illustrations of the beautiful Mumble. Along the way, we are given fascinating insight into the ornithology of owls - from their evolution and biology to their breeding habits and hunting tactics. The Owl Who Liked Sitting on Caesar is a witty, quirky and utterly charming account of the companionship between one man and his owl.

This is a book that doesn’t require much of a review. It is an endearing, amusing, and also moving account of an editor’s life and experiences as the owner of an owl. An interesting, short book.

“Perched on the back of a sunlit chair was something about 9 inches tall and shaped rather like a plump toy penguin with a nose-job. It appeared to be wearing a one-piece knitted jumpsuit of pale grey fluff with brown stitching, complete with an attached balaclava helmet. From the face-hole of the fuzzy balaclava, two big, shiny black eyes gazed up at me trustfully. Kweep, it said quietly.”

Windrow recounts his various experiences with Mumble (and the short tenure of his first owl), and there are so many moments that bring a smile or even laugh, as he recounts the rather cat-like affections and mannerisms of his pet owl. (Indeed, Windrow says owls are basically cats with wings). To avoid cute-overload, the author alternates some chapters of his experiences with more informational chapters – for example, one on the biology of owls, one (really interesting) chapter on their place in folklore and mythology, and so forth.

A quick read, that will make you smile and also tug on your heartstrings, The Owl Who Liked Sitting on Caesar is an enjoyable book. It perhaps could have done with being a bit shorter: the anecdotes have a slightly repetitive quality about them, without ever losing the obvious sense of affection Windrow felt for his pet and companion. A different book to what I normally read, it was nevertheless a quick and endearing diversion.