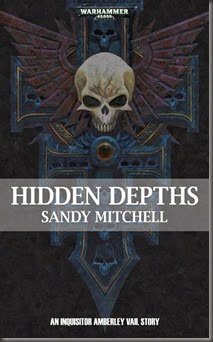 A Secondary Character steps into the Foreground

Inquisitor Amberley Vail, best known for chronicling the escapades of Commissar Ciaphas Cain, follows the trail of smugglers of alien technology, and finds herself in the middle of something much bigger… An artefact of an ancient race leads Inquisitor Vail and her warband into the depths of an underhive, where more than just mutants and gangers lurk in the darkness. Will Vail survive to tell Commissar Cain about this adventure?

Inquisitor Amberley Vail, chronicler of the Ciaphas Cain adventures, finds herself in deadly peril when an ancient alien artefact leads her into the depths of an underhive.

I’ve enjoyed a number of Mitchell’s Warhammer 40,000 novels – in particular, his Ciaphas Cain series, which takes a more amusing, less-serious (but no less action-packed) approach to the WH40k aesthetic and universe. Hidden Depths takes one of the secondary-characters from the Cain series and brings her to the fore: Amberley Vail – she appears in the Cain novels, but she’s also the ‘narrator’, as the novels are presented as edited narrative histories of Cain’s “heroism”. And the story really works. This was a very good read.

Mitchell takes what is becoming the ‘standard’ template for stories that feature an Inquisitorial warband at its centre: there’s an OCD and pedantic savant, the dreamy psychic, former-Arbitrator enforcer, and usually someone who is some variation of a former underhive ganger (Mitchell checks each box). There’s nothing wrong with this make-up, but it would be interesting to see some more variation.

Nevertheless, Mitchell offers a story with a classic-Black Library feel to it. It reminded me of the stories we used to get in Inferno!, the quarterly fiction magazine, and some of the earlier anthology stories. It also reminded me of the now-old Necromunda game that Games Workshop used to produce (and was always my favourite). The warband descends into the underhive to figure out what’s going on. Naturally, they come face to face with ravenous beasts and an unexpected enemy.

There are some nice, cheeky jokes in here, too – for example:

“We wasn’t expecting the Holy Inquisition…”

Sometimes the sense of fun veers a bit too close to glib and maybe even threatens to become slightly annoying. But, for the main, Mitchell maintains a lighter tone that works, and doesn’t get too silly. In fact, that’s what makes his fiction work so well – the fact that he obviously doesn’t take the source material and aesthetic too seriously, but at the same time he keeps well within the sub-genre’s bounds.