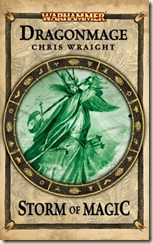 Dragonmage is the second of three novellas from Black Library’s Storm of Magic series, about expansive and chaotic magic. This novella is the story of two elven heroes vying for supremacy in the race to become the next Phoenix King, going to great lengths to swing the contest in their favour, using any and all means to gain the upper hand. Which means some moments of extremely poor judgement. And a lot of dragons.

The novel starts off with a set piece battle between Rathien’s forces and Valaris’s, which results in Rathien’s embarrassing defeat. There’s a great level of detail – the battle scenes are, as can now be expected from Wraight, pretty awesome. Sometimes, however, it felt like the detail was just a tad too much, and hindered the momentum, but this was only really a problem in the opening battle, as afterwards the detail is not only excellent by also well-incorporated into the story.

Valaris is your typical, haughty and arrogant Elf lord. Anlia, his hidden mage servant, offers him something that could make him the next Phoenix King. Valaris’s burning ambition leads him to accept without questioning the source of her knowledge. Under Anlia’s guidance, they seek a fulcrum, a point that draws the Winds of Magic stronger than any other point in the world, and can become a vortex or maelstrom of energy when the Winds are blowing a storm. It also, however, can attract monstrous creatures that will have to be defeated before they can harness its power.

Haerwal is council to Lord Rathien of Caledor – the once mighty dragonlords, a province that tied its fortunes to its ability to harness the power of the dragons, now in decline as the dragons grew dormant. But, with the Winds of Magic growing stronger, Rathien sees an opportunity to reassert his House’s dominance and make another play for the Phoenix Crown... Rathien’s side of the story is more the focus of the novella, and we see through Haerwal’s eyes as well, as he watches his lord’s ambition consume him utterly.

Wraight’s prose and plotting are brilliant, and I read this novella in one sitting. The action is great and, save the slight over-description in the opening battle scene, this novella includes one of the best Warhammer battle scenes I’ve ever read – it’s huge, ambitious, and aerial. Wraight writes dragons very well, too. When Rathien first wakes them, there’s a great scene in which he meets his new steed, and we get a sense of the awesome majesty of the creatures.

It’s a pity this was only a novella, as I really started to like the characters (including one of the dragons, which had a great, understated personality), and I think it could have worked as a longer, full-length novel – mainly because I would have liked to learn more of Elf politics and the wider contest for the Crown. But, of course, the point of this series is magic. And in that respect, Wraight has created a story in which magic is devastatingly at its centre, populated by interesting and varied characters.

Dragonmage is a story of how far people will go to acquire power, even in the face of seemingly-insurmountable odds. It is a story of burning ambition mixed with arrogance and hubris, the corrupting influence of power. And of dragons. Awesome dragons.

Definitely recommended for fans of both the table-top Warhammer game, and Black Library’s Warhammer novel series as a whole. This was a good-fun novella.

In the Same Series: Razumov’s Tomb by Darius Hinks; The Hour of Shadows by C.L. Werner (coming very soon)

Posted by Civilian Reader at 1:13 PM