An Interview with JULIET E. McKENNA 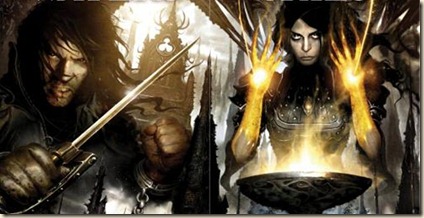 This year, Solaris published the latest fantasy novel by Juliet McKenna, Dangerous Waters. It is the beginning of a new trilogy (The Hadrumal Crisis) set in one of her already-established fantasy worlds, and it sounds pretty cool. After reading the prequel novella, I wanted to learn more about the series and also McKenna’s writing in general. I contacted Juliet about an interview, and she was kind enough to answer my questions.

Your new novel, Dangerous Waters, is a return to the world of your previous trilogy, The Lescari Revolution. How would you introduce the series and world to new readers, and how does it differ from the previous trilogy in this world? 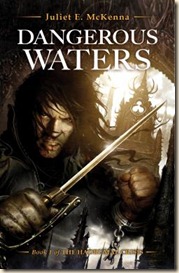 I write stories set in a world where historical realities challenge the clichés and assumptions of epic fantasy fiction. How would swords and sorcery really work for real people, men and women, rich and poor, not just for the kings and wizards? As for those kings and wizards, what can they really do if, for instance, dragons turn up ready, willing and able to burn everything to ashes? Dragons who are simply the top predator in this world, incredibly powerful magical animals, not creatures that there’s any chance of negotiating with?

The Lescari Revolution was very much about swords. I wanted to explore how those ordinary folk might retaliate when their feudal rulers’ ambitions were ruining their lives. One thing I wasn’t about to do in that story was solve all such problems with a few handy spells, not least because I’ve always felt any world with magic could only work as long as that magic was closely controlled. So, that trilogy has surprised, and intrigued, some fans as being a very low-magic fantasy.

The Hadrumal Crisis is the flipside of that particular coin, very much focusing on the sorcery. If magic is closely controlled, how is that achieved? By consensus or magical tyranny? If it’s by consensus, what happens if that is challenged? How will the Archmage respond when the age-old Edict of Hadrumal against wizardly involvement in warfare is defied, not through arrogance or ambition but to save innocents from corsair raiders who rob and enslave them? So with the wizards involved, there’s lots of magic in this one. Which instantly poses the question; how with the Aldabreshi react, since they are implacably opposed to wizardry being used anywhere near their domains?

How do you see the series developing in the future? 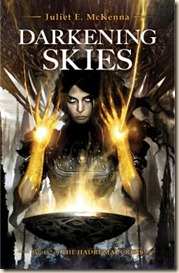 At the moment I’m writing the second volume, Darkening Skies, and that means working through all the unexpected consequences that have arisen from the misguided actions of my characters in Dangerous Waters, regardless of their good intentions. As you might expect, there are still more unexpected consequences as those ripples spread. Tackling those consequences and taking control of events is the challenge for everyone in the third book. That’s all been planned in advance and that’s all I can say without spoilers.

What I don’t yet know is the unexpected twists that this story will take away from my outline. I can only look back on my previous dozen or so novels and assure you that such twists will certainly happen. That’s the way it’s always gone; one of the fun things about being a writer.

Where did you draw your inspiration from for this series, and also for your writing in general?

The underlying inspiration for my writing is and always has been my love of history and myth. I look at the broad spectrum of historical fact, interpretation and speculation and on into fantasy fiction and start asking myself “what if?” Every series I’ve written has started with that question.

With a dozen books already written in this world, there’s also plenty of back story and world building for me to draw on. For instance, I devised the fine detail of the Archipelago’s systems of astrology and fortune-telling for the Aldabreshin Compass sequence. Looking at that now, since as I’ve already mentioned, the Aldabreshi detest magic, I see a-once-in-a-lifetime conjunction of the stars is just about to happen. That’s going to have a major influence on whatever the Archipelagan warlords decide to do – and that’s why the second volume is called Darkening Skies.

Finally, I have one new and exciting inspiration for this particular series. I’ve already had Clint Langley’s awesome artwork for all three titles. His visions of my characters have spurred my own imagination in some entirely new and unforeseen ways. In particular, he’s set me the challenge of understanding just what the Archmage Planir is doing in the third volume. I don’t yet know but I know my writing really has to do that particular portrait justice. You’ll understand when you see the pictures!

How were you introduced to fantasy and sci-fi?

I was introduced to fantasy through being read The Hobbit and the Chronicles of Narnia as bedtime stories before I could even read them for myself. I discovered SF on the television first of all, as a child of the early ’70s watching UFO, Doctor Who and Star Trek. In both instances, I was enthralled and that love’s never left me.

I love being a writer and being paid to let my imagination loose and share all that results with other people is a wonderful privilege. That said, dealing with the trials and tribulations of the publishing industry, especially at the moment, can be a real challenge. Ebooks – great in so many ways, but not so great when Amazon can slash their price and you can do nothing about it? Declining advances? Tighter deadlines? The demands of publicity and social media? It’s no business for the faint-hearted, that’s for sure.

One way I cope is by being very organised. I schedule my research and writing time and am careful to balance that with conventions, blogging, reviewing, short story commissions and non-fiction projects – and the demands of family life, let’s not forget my two teenage sons and husband. Seriously, I have a wall planner on the back of my study door with different blocks of time marked out with coloured pens and I work office hours every day. Sometimes I do end up working evenings or weekends, but I try to avoid that because there’s the very real danger of burnout for writers these days.

I’ve always written, right from primary school days and I look back on the way I used to rehash my favourite stories into tightly written exercise books with a wry smile. I didn’t ever particularly see myself as becoming an author though. I only began to think about trying that when I was in my twenties and only seriously focused on writing for publication after I turned thirty and found myself at home with two small children. Like being a novelist, being an at-home mum is a wonderful privilege but some aspects of it can be unexpectedly demanding and not in the ways you expect. I really needed to do something grown-up for myself.

My first attempt at an original full length novel was an epic fantasy blockbuster masterwork – or so I thought. I look back on that fondly and also with immense gratitude to the agents and editors who turned it down and who so generously – if painfully bluntly – explained exactly why they did so. Taking those criticisms to heart was what enabled me to write an entirely different book worthy of publication.

I think that fantasy writing today is richer, more diverse and more nuanced than it has ever been. Authors are drawing on inspiration from far and wide, historically and geographically, really testing the central assumptions of the genre as well as exploring the edges and the overlaps with other genres such as crime, historical, romance and horror.

I see myself as working in the heart of epic fantasy and doing all that I can to bring those fresh perspectives to that core.

I have a couple of short stories in the works, one urban fantasy (sort of) to be published next year in The Modern Fae’s Guide to Surviving Humanity and one steam-punk commission which I’m really looking forward to tackling. Short fiction is a wonderful way to stretch my writing in new and unexpected directions.

I have a contemporary/slightly supernatural novel written, which I want to place as well as a new fantasy series proposal and an entirely unexpected idea for a full-length urban fantasy novel. Getting any of those on a publisher’s desk will have to wait until I’ve got this second Hadrumal book written though.

Fiction? I’ve just finished Kim Newman’s Anno Dracula and I’m about to start Mary Hoffman’s David. Epic fantasy is the one thing I cannot read when I’m actually working on a novel. So I’m happy to know I’ll be reading a good deal of SF in the months to come now that I am on the judges’ panel for the Arthur C. Clarke Award. 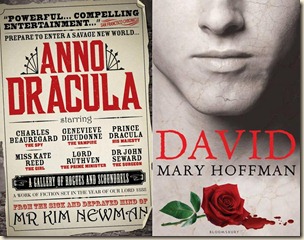 Non-fiction? I have the memoir of a eighteenth century slave-ship captain to read, and another by a man who ran away from home at the age of 14 in 1803 to join the Royal Navy. Historical autobiography is the most marvellous resource for the fantasy novelist.

I write about kings and feudal systems but I am a republican, in the UK non-monarchist sense, strongly in favour of liberal, social democracy and strongly opposed to this country’s entrenched class structures.

I’m going to the World Fantasy Convention in San Diego in October. It’s my first WFC, my first visit to California and a chance to meet up with so many US writer pals. I can’t wait.

So excuse me while I get back to writing Darkening Skies (Hadrumal Crisis Book 2) as my deadline is the week before WFC and I absolutely have to finish it by then!

Posted by Civilian Reader at 12:03 PM