Continuing our series of guest posts about influences and inspirations (read the open invitation), I present you with our second author! 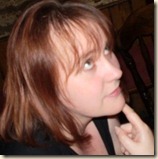 Sarah Cawkwell has written several short stories set in Games Workshop’s grim-dark 41st millennium. Her first full-length novel for the Black Library, The Gildar Rift, is due out in December 2011 (and is much anticipated here at Civilian-Reader – it features Huron Blackheart, one of the most colourful Chaos characters in Warhammer 40,000 lore).

You can catch up with the slightly obscure adventures of what it’s like to be a genre fiction writer at Sarah’s great blog, “Pyroriffic” (which is also her Twitter handle). So, without further ado, let me pass things over to Sarah…

Ever since I was knee-high to a grasshopper (which given I only come up to its shoulder now wasn’t so long ago), I've wanted to write stories. I've wanted to write stories because one of my earliest memories was of making somebody laugh with something I had written. Quite a clear memory. I was in the first year of school, so can't have been older than five, and we had to write a story that the teacher – Mrs Chapman, I remember her well – would then read out. Mine was about one of the Mister Men who had stayed determinedly by an acorn waiting for it to grow into a tree and about how his attention wandered to look at all the other things around.

My teacher laughed at the story and that was what I was going for. Even then, I got a buzz out of seeing someone enjoy something I had created. Creative writing was always my favourite part of school and that's something I want to come back to at the end.

But to answer the question... what has been most influential to me as a writer... well, there are so many that it’s hard in some ways to whittle it down to one. The Dragonlance series, for example, was one of the first series of books that hooked me in and made me actually care about the characters within. I moved onto many other fantasy series and found inspiration in them all. Robin Hobb established herself firmly as one of my favourite authors for much the same reason – her characters are to die for.

If I look to the left and right, at my hugely over-populated bookcases, the story tells itself. It’s rich with a variety of well-known and less well-known authors. Robin Hobb, Robert Jordan, Terry Pratchett, Douglas Adams, Terry Goodkind, Bernard Cornwell, Chris Wooding, James Barclay, Piers Anthony, Jane Yolen. And yes, J.K. Rowling. Don’t judge me. [No judgment from here; I enjoy them, too. - Stef] 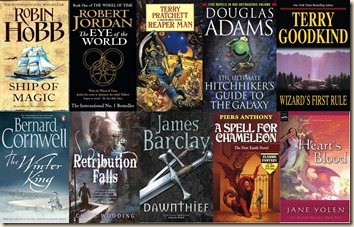 On top of the over-populated shelves there are all the Black Library books that have yet to receive their very own bookcase, and look at the inspiration there: Jim Swallow, Dan Abnett, Graham McNeill, Aaron Dembski-Bowden, Mike Lee... Look! They’re not alone up there! They’re joined by Jim Butcher’s Dresden Files series and Mike Carey’s Felix Castor books. Right in the middle of the pile is a Star Wars tie-in novel called The Courtship of Princess Leia. Oh, and my copy of Sims 3. I wondered where that had gone...

There’s another three sets of shelves upstairs bulging with books. Everywhere in this house, there are books. If there’s a flat surface, there’s a book of some sort. There is a point to this. Honestly. Bear with me. And my point is this.

Every book, be it Enid Blyton’s Magical Faraway Tree series or Tolkien’s Lord of the Rings has impacted on me in some way. It’s not quite reached the stage where I’m sitting wondering what would happen if the children from Blyton’s books went up the ladder and found the World of 40K (other than thinking that would make a staggeringly cool story... the Saucepan Man in power armour, or Dame Washalot in Sororitas gear... heh...).

If the measure of a truly inspirational book or series of books is one that you return to over and over again, then I would narrow it down to Robin Hobb’s Liveship trilogy. It’s a story that pulls me in and keeps me guessing every time, even though I know the outcomes. Beautifully written, expertly delivered... everything I want to read. And if the measure of a truly inspirational book is one that you remember with more fondness than anything else, it would be Noel Langley’s The Land of Green Ginger which our teacher read to us every day before home time. 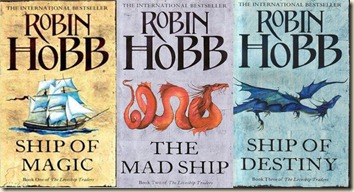 Take inspiration from everything you read that’s around you. Because books, no matter their creed, colour or other word beginning with ‘c’, are inspirational. And that’s all you need.

And the creative writing? If I had to name a single big inspiration, it would be my secondary school English teacher, Mr. Nye. Because he encouraged my quirky, slightly off-the-wall stories and, just like my mother, always told me that I could write a book.

Keep your eyes out for Sarah’s debut novel, The Gildar Rift, coming in December 2011 from Black Library: 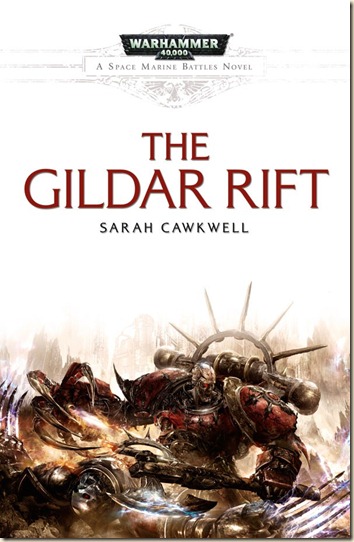 You can find Sarah’s short fiction in the following books from Black Library: Victories of the Space Marines and the forthcoming Architect of Fate 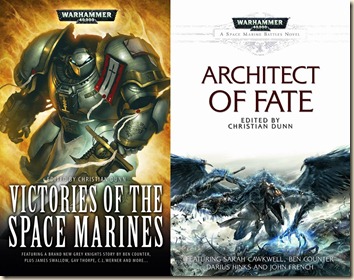 Posted by Civilian Reader at 10:27 AM