“The Key to Creation” by Kevin J. Anderson (Orbit) 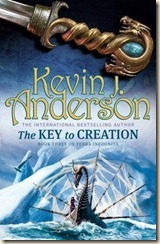 In this final part of Anderson’s Terra Incognita fantasy trilogy, the author has pulled out all the stops to make this the most explosive and gripping instalment, in a series I have thoroughly enjoyed from the start. There is a lot going on here, as Anderson draws together all the various subplots he has presented us. It’s not perfect, but I certainly enjoyed reading it very much. (I stayed up on two occasions reading, until it started getting light outside…)

The book opens with a handy (if surprisingly long) ‘Story So Far’ chapter. It’s written in a very straight forward manner, so we are quickly filled in and caught up, and is a nice refresher course. Given the important and momentous events that take place throughout this novel, it is very difficult to review without spoiling it for others. Therefore, I’m going to keep the review relatively short and general.

Anderson includes plenty of commentary on and allusion to contemporary religious, political and social debates, which adds a nice extra layer to the events in the novel – for example, the role of religion in society and politics, international power politics, clash of civilisations, even fossils and what they mean for certain strict religious interpretations, are all themes touched upon in The Key to Creation.

The characters in the series had grown and developed over the previous two novels, and it’s nice to see that they continue to do so in this final volume. The series spans decades just over two decades, it must be remembered, so it’s great to see the characters actually growing up or developing their worldviews.

On the Tierran side (northern, most like Europeans in our world), Jenirod, Queen Anjine’s former-betrothed, for example, has become disabused of his thirst for war and glory. After his role in a massacre (one of the cyclical tit-for-tat atrocities committed by the two sides in this war), and the struggle for the Gremurr mines, he looks down upon those who fancy themselves as warriors, having no clue what warfare is actually like. Mateo, Queen Anjine’s lifelong friend, has grown into a strong leader and warrior, and of all the characters in the novels, probably goes through the most brutal time, experiencing some truly horrific events and also generally getting beaten about – both physically and emotionally. Queen Anjine herself, however, is a bit weaker as a character in this novel – the fact that she constantly reminds herself to remember that she is queen, and not a “mere woman” (her words), irked me. It made her seem ill-suited to the role, when previously I thought Anderson had managed to show us that she’s grown up. Given that all the other female characters are strong and realistic, Anjine’s melodramatic internal monologue stands out.

On the Uraban side, life is becoming ever-more difficult. With the loss of the Gremurr mines, a devastating natural disaster, and some ingenious Tierran strikes against Uraban holdings, Soldan-Shah Omra is struggling to keep his people together. We spend some more time with Asaddan, a visiting dignitary from the Nunghal people (same continent as the Urabans, but separated by distance, time and cultures), and it quickly becomes apparent that he will become central to the solving of many of the issues facing this world.

There are many more perspectives to deal with, now, so at the start it was difficult to really get stuck into any particular plot thread, before necessity meant we had to move on to another one. This made it easier to pick up and put down towards the beginning, but it remained enjoyable. Things change considerably after the first 100 pages, though, as the story picks up steam and events start ramping up towards the climactic finale and denouement. (The last 250 pages, I read in one sitting, well into the early hours of the morning – partly because the story itself, but also because Anderson’s plotting by this point just pulled me inexorably on towards the end.) Despite the seemingly-choppy beginning, Anderson quickly shows the reader how good he is at giving us just enough to keep us reading, a well-placed tease or cliff-hanger here or there, keeps us guessing and ploughing on through. As events for all of our characters start ramping up, it became very difficult to put it down. At the end of quite a few chapters, I found myself muttering, “Mr. Anderson, you tease”, before feeling weird about how that sounded and moving on. (But he was being one!)

One of the central themes of the novel is an indictment of ignorance and blind zealotry. There are a couple of characters quite central to the plot(s), who promote and preach a hatred for the other – in particular, Prester Hannes, who accompanies the Tierran expedition to find Terravitae, and Sykara Fiyira, who accompanies the Uraban expedition. Anderson’s characters show how contact with other races shows them that they are not really that different at all, while those who have no contact with outsiders are driven quicker to wrath and racism, harbouring impressions of the other side as bloodthirsty, barbaric, evil murderers. Certain revelations for a couple of characters highlight this theme best of all, but unfortunately telling you more would be a major couple of spoilers. One bellicose Aidenist Destrar (lord), for example, begins to mellow as he spends more time with a young Uraban, comes to see them as people. It’s a nice positive message; one that’s not ladled on overly heavy, either, done very well and for the most part realistically (Anderson remains slightly prone to including a smattering of schmaltz, but it’s nowhere near as bad as many other authors, and in many instances is just right to create a juxtaposition with the brutal war that’s going on).

The Key to Creation is written in a quick and accessible style, and packed with ever-more momentous events and creative creatures and settings. Anderson clearly has a love of strange sea creatures, and this novel (not to mention the series as a whole) features plenty of them. Thanks to the rival expeditions (which, together, formed my favourite chapters of the novel), we get the opportunity to explore yet more of the world Anderson has created, and it’s a pleasure to read and discover along with the characters. I must say I do love that there are sea monsters in this series – I feel like we don’t see them too often anymore (although, I am really chomping at the bit to try Robert V.S. Redick’s series, now, which I may have to make room for in the review-schedule).

It’s a pity I can’t go deeper into the story without spoiling it for readers new to the series. Suffice it to say, this is a solid close to an entertaining fantasy trilogy. Anderson has done a great job building on what came before, and making this the most exciting, intense instalment in the series. It is also grimmer and more brutal, with a lot more action and adventure. I’ll really miss the world Anderson’s created, and the people he introduced me to. (For those who have read the series and want more, however, he has released a Kindle short, Mythical Creatures.)

Throughout the novel and series, there are clear hints of some of Anderson’s inspirations – Greek, Roman and Norse mythology in particular, but also contemporary discussions and issues in society and politics. It’s all wrapped up in an epic fantasy adventure plot that is entertaining, engrossing, and also quite original. It makes for a grand melange of themes and creation that is very enjoyable to read.

A highly recommended fantasy series, if you want something a little lighter than George R.R. Martin or Joe Abercrombie.