An Interview with NICK LAKE 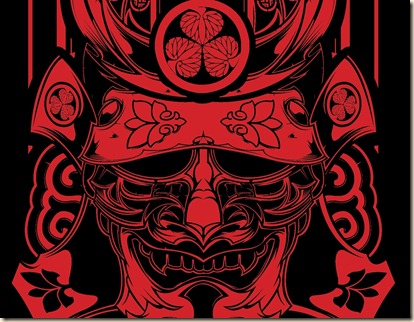 Vampires are all the rage in YA and genre fiction, but not many of the series has jumped out at me as particularly original. Then along came Nick Lake’s Blood Ninja series, which mixes vampires, feudal Japan and ninjas into an action-packed and entertaining melange. This week, therefore, and following in the wake of a guest post on Influences & Inspirations, Nick agreed to answer a few questions about writing, his series, juggling his writing with work as an editor, and also possible personal teleportation.

Your debut novel, Blood Ninja, is out now in paperback; and the sequel, Lord Oda’s Revenge is out in August 2011. How would you introduce the series to new readers? What can we expect from the second novel, and the series’ future?

Blood Ninja is the story of Taro, a simple peasant from a fishing family on Japan’s coast. When his father is murdered one night by ninjas, Taro is rescued by another ninja – and discovers one of the hidden truths of 16th century Japan: that all ninjas are vampires, thus explaining their speed, stealth, skill and preference for nighttime activity. Taro gets to know all this intimately, when Shusaku, the ninja who saved him, is forced to turn him in order to save his life. There is loads of fighting, a prophecy, quite a few people (and vampires) get their heads cut off, and we learn that Taro might not be a simple peasant after all… If I had to pitch it, I’d say it’s Across the Nightingale Floor (a book I love, by the way), with ninjas. And vampires.

Book 2… What can I say, without giving away book 1 to those who haven’t read it, or spoiling book 2 for those who have? Well… I will say this: Taro journeys to Death in book 2, and there are ghosts and at least two enormous battles featuring whole armies, and a show-down between Taro and an impossibly powerful foe. People who Taro loves die in front of his eyes. Things burn. Vanquished enemies rise again. But in the end, Taro might just get his bloody revenge. Whether he likes it or not… 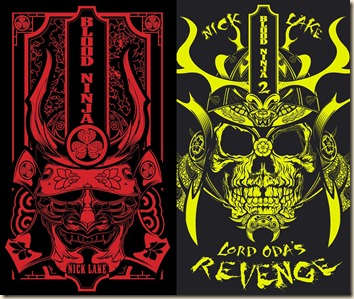 Your series draws on Japanese history and vampire/horror literature. Where did your interest in such things come from, and how did you go about turning these interests into a series of novels?

I’m not sure where the interest in Japan came from. I’m not an anime guy, particularly. I’ve traveled all around China (though sadly not Japan, yet), so I think some of it is more an interest in Buddhism and Tao and certain aspects of mythology, ghost stories and the like, which very much transcend both countries. But also I got very into Studio Ghibli films, at a certain point. I’d also cite Across the Nightingale Floor as a huge influence. In terms of the vampires: I’m not sure that I’d say I have a particular interest in them (though it hasn’t stopped me reading at least two academic books about them, so maybe I’m kidding myself). It’s more that I thought, at the point when I started writing Blood Ninja, that it was a shame, with the ascendance of Twilight, that teenage boys were being neglected a little. I wanted to give them some vampires. Vampire ninjas actually! It’s just what I would have LOVED to read when I was a teenage boy, instead of dreary books about kids who find bits of WWII bombs, or whatever.

Oh, good question. I don’t really know. I’m not a fantasy buff, I should say from the off. I only started on George R.R. Martin a couple of years ago. (Though still before the TV series, all you Point Scorers.) I did read a lot of Terry Pratchett as a kid, but that’s about it. 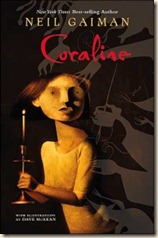 I do read quite a lot of fantasy now, though: people like Scott Lynch and the amazing Joe Abercrombie (easily the best writer of action I have ever read). But I think I probably came to it more through editing and reading children’s books, which had this explosion of fantasy in the wake of Harry Potter. Which is ironic, because now I’m working – in my day job as an editor – with all these kids’ authors who came to children’s books from comics and fantasy, people like Derek Landy, Will Hill and Sarwat Chadda. And yet I was precisely the other way round: I was introduced to fantasy by Coraline, and Harry Potter, and Philip Pullman.

Of course, fantasy and children’s books are very closely linked. Tolkien and C.S. Lewis wrote for children – and so modern fantasy arguably grew out of children’s books. Which in turn arguably grew out of what was discarded from adult literature. That’s not my idea: C.S. Lewis said in one of his essays that children’s literature was like an attic in which no-longer-fashionable but still useable furniture was stored – that furniture being a certain kind of storytelling that has been increasingly squeezed out of adult literature by preoccupations with philosophy and identity; fairytale and myth and the heroic narrative, basically. All the apparatus of story, which is the big thing that children’s books and fantasy have in common.

Well, I work as an editor. And I don’t think of editing and writing as being terribly different, actually. They’re both about shaping stories. When you’re editing, you get a first draft from the author, and then you make suggestions: to beef up the third act, to bring back a character who only appears once, to remove extraneous scenes, to work on the logic of the plotting, to add poignancy or drama or humour. And then the author goes away and works on it, and comes up with their own solutions to some of the problems, and solutions to problems you didn’t even think of too. 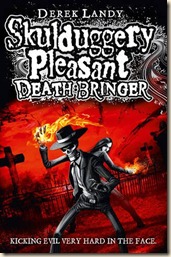 The only real difference when you’re the writer is that you have to actually write the first draft, and then do the work that your editor is suggesting! So editing is like an easier version of the same enjoyable activity, in some ways: you still get to have a certain input into the shape of the story, but without a lot of the hard work. You also get to work on so many different projects. One day I might be editing one of David Walliams’ hilarious and moving tales for 9+, and the next I might be working on the 500-page action-packed manuscript for Skulduggery Pleasant: Death Bringer. Which makes editing a lot of fun.

It would be tempting to say that the flipside of this is that, when writing, there is a greater pleasure in it being your own book. But it wouldn’t even be true: my own books are edited, by editors, who often suggest the best scenes or dramatic devices. I couldn’t call them my own. So maybe that’s a simpler way to put it: most books, unless the author is a megalomaniac or the editor is lazy, are collaborations between author and editor. I just jump sides.

I don’t think I have any writing or research practices that differ from anyone else’s. I read, I watch things, I type. I type very fast, though – the top end of touch-typing – and that helps massively because my day job is extremely busy and I only get so much time for writing.

I don’t really remember. Definitely when I was doing English at University, but maybe before that. I wrote terrible poetry as a teenager, then a play at University, which was performed, and then didn’t start writing fiction until I was in my 20s. By then I was editing children’s and YA, so that seemed the natural thing to try to write. My biggest problem was that for years I didn’t know what to write – which I think is a common affliction. Then something happened – a big change in my life – and weirdly after that I had loads of ideas for stories. I don’t know if that’s common or not.

I don’t look back on my teenage poetry fondly. It was awful.

I don’t know if I can answer that. (See previous comment about not being a fantasy buff!) I think people like Joe Abercrombie are really exciting. And it’s nice to see them getting the big mainstream sales.

What projects do you have in the pipeline? Any projects unrelated to your Blood Ninja series?

Yes. Aside from Blood Ninja III, which I’ve just finished writing, there’s my first book for older readers – it’s being published in adult and YA editions – called In Darkness, which is coming out in January next year.

It’s narrated by a teenage boy, trapped alone under the rubble after the 2010 earthquake in Haiti – looking back on his life up till that point, the mistakes he’s made, and also, of course, thinking about whether or not he’ll be rescued. Then strange things start to happen, and the question becomes: is he alone after all? It’s not a ghost story though: it’s about violence and forgiveness and the thin membrane between the past and the present… and vodou and slavery and murder and vengeance and love. 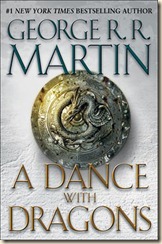 I’m reading A Dance With Dragons, of course! And a lovely Canadian literary novel with unusually beautiful typesetting called The Sentimentalists, because I like to mix it up. And because Dragons is too big to take on the train.

That I can teleport.

Unfortunately, not at will. Or to where I want to go. It’s actually not very useful.

I can’t wait for my daughter, who’s nine months now, to start talking. It’s an unbelievably exciting thought. Though she does, in fairness to her, already manage to get an amazing range of expression out of the word “ooh”.

Posted by Civilian Reader at 10:02 AM