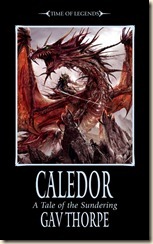 A Tale of the Sundering

Ulthuan is burning…Its people are scattered, its lands in ruin. Under the iron fist of the Witch King dark elves sack and pillage. His desire is nothing short of total domination and the utter extinction of the high elves. Skies blacken with the wings of dragons and smoke occludes the sun. Daemons crawl from their hell-pits, hungering for souls. Through the fires of civil war, a general becomes a king. Prince Caledor takes up the Phoenix Crown and with it’s the hopes of all of Ulthuan.

Though it is a burden unwished for, he is the last heroic thread that can unite the realm of the true asur. Darkness closes, filled with the screams of war. Dead elves soak the land in blood, anointing a spell of unbinding; a cataclysm intended to end the very world.

Caledor concludes the epic trilogy of books by Gav Thorpe. The narrative is a whirlwind ride of dragons, elves, betrayal and magic as a titanic struggle to control the island of Ulthuan unfolds. Starting from the mere whisper of betrayal by the cruel Dark Elves, it builds through a series of events to an gripping finale. If you have a love of epic fantasy then this is the book for you.

The first thing I have to look at is the very one that drew me to this book: Dragons have always been an interesting concept in fiction and they can be done incredibly well, or incredibly badly. Thankfully, Thorpe has done the former, and he has really impressed me with the way his dragons are portrayed. It’s fantastic to see a dragon that is wise and noble, but still the heart of a beast. In a particular sequence where Imrik (later to be Caledor) takes his family to see his own dragon in the heart of his homeland, you really get a sense of the noble spirit of the dragons, and later with at least two battles during which Imrik’s dragon, Maedrethnir, falls into an animalistic rage and Imrik has to fight to retain control of him. The dragons are not mere steeds in this book, but fully fleshed out characters.

This brings me on to the characters themselves. Elves, like dragons in novels, have a tendency to be very type-cast and you can see it in many novels in which they appear. With a book like this, where every character is going to be an elf, it could have been terrible if it featured type-cast elves. Thankfully, as with the dragons, Thorpe has managed to create a set of great characters, making them feel almost human and mortal, rather than just ‘alien’. Imrik is at the heart of this story and at first a haughty elf, proud and warlike but uninterested in the reins of responsibility, even though he knows one day he must take them up. His kin are also amazingly well written. Dorien is rash and quick to act and, like a true family member, he grates on Imrik but there remains a strong bond between them. Thyrinor is the wise one, obsessed with the needs of court, more or less the typical elf of fantasy. Having these three elves to follow from the beginning of the book, you get some very different perspectives on the same unfolding events.

The other elves that you see in the book are equally as powerful and full of character. You have the almost barbarian-like elves of Chrace, the sea dwellers of Lothern, and of course the dark and mysterious Naggarothi themselves.

The Naggarothi, or ‘druchii’, are the exact opposite to the noble High Elves. Savage and bitter, they are out for nothing but pain and slaughter. While they are indeed the enemy of the piece, it’s interesting to see the similarities between them and their nobler kin, and the reciprocated hatred. Throughout the book you certainly feel like Imrik and his fellow elves are treading a fine line and one slip into bloodlust could find them walking the same path as the enemy they hate so much. Malekith, the Witch King of Naggaroth, embodies this feeling perfectly. Once a noble elf, you see him fall to desperation and a want for power before finally turning everything he feels into hatred and spite against his fellow elves. At all times you feel as if Imrik himself could soon succumb, too, if he is not careful.

As you read the novel, you need to be careful not to fall in love with one character or another too much. Caledor has almost the same feeling as Game of Thrones, in that no character is safe and everyone is potentially expendable. Many times I was reading through a chapter with a clear idea of where it’s probably going, only for Thorpe to throw up something totally unexpected. It’s incredibly fun and has you guessing every time a battle or skirmish begins. This manages to have you on the edge of your seat throughout the novel, desperately hoping that your favourite hero will survive.

Thorpe has managed to portray a vicious and bloody world with locations as varied and rich as the characters he creates; perfect for the lands of Warhammer and the franchise. Ulthuan is beautiful and fantastical, while also tinged with the darkness and terror of the druchii. It’s a chilling and evocative image when the white cities of Ulthuan are stained red, mountains of bodies (of all ages) stacked in the streets. It’s powerful stuff, and if it doesn’t tug on your heartstrings a little then I don’t know what will.

A special mention has to go out to one of the lesser characters in the book: Carathril appears as only a messenger near the beginning of the book, but goes on to have a story all his own. I think I liked this perspective because I liked seeing the world through the eyes of a normal, everyday elf rather than an elven noble – you really feel the weight of the wars landing on his shoulders. He is almost a mirror image of Imrik, dealing with the same problems but on a much smaller, more personal scale. There is a clutch of fantastic chapters set around the finding of Imrik and a siege of Lothern that really brings this character to life, and you should look out for him as you read.

Caledor is a superb tale of dark fantasy and no mistake. Doing what the Time of Legends does best, it spans decades as the wars unfold. Thorpe manages his material very well, letting the story off the leash just enough to encourage a foray into a side story before he pulls it back on track to the main narrative. If you love dragons, you will enjoy this book no end. If you love elves, this will reaffirm to you exactly why you like them and how different they really are. (If, like me, you are a fan of Dwarves in Warhammer, you will probably also enjoy the fact that so many elves are dying.)

A great novel, and a fantastic end to the trilogy.

The Sundering Trilogy by Gav Thorpe: 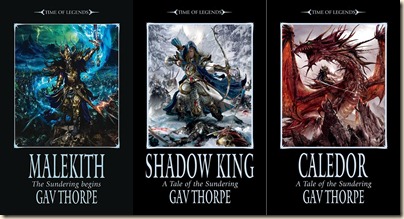 Posted by Civilian Reader at 11:04 AM