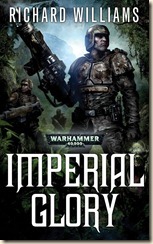 Tired and broken by war, the men of the Brimlock Eleventh Imperial Guard are a force on the verge of collapse. Having been stretched across the galaxy by their loyalty to the Emperor, they are presented with one final battle that will allow them reward they all seek: to colonise the distant world of Voor and live out the rest of their days in peace. All that stands in their way is a force of savages – a plague of feral orks that has spread across the planet. But can the Brimlock’s battered bodies and minds hold up to this greenskin invasion?

The Imperial Guard always present an interesting perspective on the Warhammer 40,000 universe: considerable in number, but physically unimpressive next to Space Marines, they are the backbone of the Imperium’s forces. Imperial Glory offers an interesting and original take on the plight of the Guardsmen, and despite a slightly rocky start, was very enjoyable, and a novel with surprising heart.

Imperial Glory tells us of the Brimlock Dragoons, an Imperial Guard force sent to a distant planet to purge it of the ork taint. The planet is independent, not beholden to the Imperial Administratum, but the crash-landing of an ork hulk is beyond their capabilities to deal with. As the Brimlocks do what they do best – fight – they struggle with internal regimental problems and rivalries, and also a relentless enemy they consistently underestimate.

The first few opening chapters were strangely impersonal, given that this novel is, ultimately, a character-driven story. It’s not entirely clear which characters you’re supposed to like, which is something I rather liked about the novel. Lieutenant Carson, for example, is an arrogant bully in some ways, but he is beloved of his men. Major Stanhope, perhaps the most interesting character in the novel, is broken and apathetic. Blanks is suffering from amnesia (which I thought offered some interesting potential to introduce the reader to regimental society and traditions, he didn’t feature quite as much as I’d expected).

As the story progresses, readers will become ever-more invested in the characters’ plight, situation and ultimately their fates. Considering the cast, Williams does a very good job of making us empathise with this dysfunctional, weary and broken regiment. It’s very nicely done.

Imperial Glory is a different type of Imperial Guard novel, and takes some interesting turns. As mentioned above, it is far more about the characters than the ork-cleansing mission they have been sent on. Williams treats all of the characters as if they were established characters. This worked for the most part, but sometimes (particularly early on in the novel) I felt a little too in the dark about this or that character and ‘historical’ event. For the main characters, we slowly get to know more of their back-stories (Major Stanhope’s history with the regiment is a tragic tale of unintended betrayal). The novel is, therefore, very tantalising in its sparse level of details. Some earlier revelations about certain back stories would have been welcome, but I think Williams has handled and balanced the necessity to inform and entertain us very well. All of the main characters – and not a few of the lesser characters – have something in their past that weighs on their minds and informs their actions.

The Brimlock officers are an interesting bunch, and have something else entirely removed from their current battles on their minds: the chance to head home, to be selected as a member of the colour guard. This potential reward, dangling over all of them, makes them either foolhardy as they try to win a place home, or complacent after winning one. Neither trait is good for their men, and the men of the Brimlock 11th endure the consequences of each of their successes and failures.

What began as a slightly muddled novel, ended on a master stroke. I read the second half of Imperial Glory in a single sitting (a little over 200 pages), so compulsive was the story. Williams’ writing is very good, the dialogue interesting, well-paced and realistic. (As an aside, I must say I like that Black Library novels as a whole feature ever-decreasing amounts of bad or cringe-worthy dialogue.)

Imperial Glory has a moving denouement, something I haven’t read in WH40k fiction outside of Dan Abnett’s Gaunt’s Ghosts series. The novel is populated by interesting, diverse and three-dimensional characters. It is a nuanced and intelligent examination of the physical and psychic toll prolonged warfare exacts on soldiers.

I definitely recommend this to anyone who wants a WH40k novel featuring plenty of excellent action, but with a slight difference.

Posted by Civilian Reader at 11:29 AM