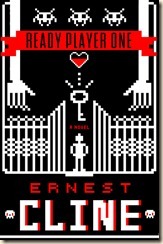 The most endearing geek book ever?

It’s the year 2044, and the real world is an ugly place. Like most of humanity, Wade Watts escapes his grim surroundings by spending his waking hours jacked into the OASIS, a sprawling virtual utopia that lets you be anything you want to be, a place where you can live and play and fall in love on any of ten thousand planets. And like most of humanity, Wade dreams of being the one to discover the ultimate lottery ticket that lies concealed within this virtual world.

Somewhere inside this giant networked playground, OASIS creator James Halliday has hidden a series of fiendish puzzles that will yield massive fortune and power – to whoever can unlock them. Halliday’s riddles are based in the pop culture he loved – that of the late 20th century. And for years, millions have found in this quest another means of escape, retreating into happy, obsessive study of Halliday’s icons.

When Wade stumbles upon the first puzzle, suddenly the whole world is watching, and thousands of competitors join the hunt – among them certain powerful players who are willing to commit very real murder to beat Wade to this prize. Now the only way for Wade to survive and preserve everything he knows is to win. To do so, he may have to leave behind his oh-so-perfect virtual existence and face up to life – and love – in the real world he’s always been so desperate to escape.

Ready Player One is the surprising book of the year: it is smart, charming, and engaging. The novel is as addictive as the computer games it references, as fun as the movies beloved by the author, and genuinely buoyed my mood throughout. Ready Player One is an absolute pleasure to read.

The novel follows Wade Watts, exclusively (but in third person). Wade is the archetypical geek – a lover of roleplaying games, video games, comics, genre movies, and so forth – and reading of his obsessions, his social awkwardness and tendency to disappear into made-up worlds was charming as well as familiar (my own childhood was pretty peripatetic, so I relied on my imagination, novels, and a few computer games for company). He is obsessive about the hunt for Halliday’s fortune, drawn also to the puzzle aspect of the game. The tasks Halliday has set out for prospective winners (or “gunters” as they come to be known – a contraction of “egg hunters”) are pretty fiendish, and it was great to travel alongside Wade as he stumbles onto clues and solutions to the problems – all of which are truly inspired and endearingly geeky.

The majority of the novel takes place within the OASIS, which means for most of the novel we don’t ‘meet’ the people behind the characters – we know them only as their avatars in the virtual reality. There are some interesting moments in the real world, though, which add a nice contrast to the fantastical opportunities that the virtual reality offers is users.

There’s a great moment that features a esoteric video-game knowledge throw-down, which stood out as both amusing and also familiar. I didn’t get perhaps half of the gaming references, but I know a few people like this (obnoxiously know-it-all), and it’s a great example of how realistic Cline’s characters are. They posture, they are insecure, they can be self-conscious and obnoxious. They feel very real, despite existing in a world where they can create everything about themselves in their ideal, fantastical image.

Ready Player One is defined so much by the volume of 1980s pop culture references that are sprinkled throughout. The first couple of chapters seemed a bit over-saturated by references, and I was initially concerned that it would become so much white-noise. Very quickly, however, things became very, very good and – like the users of the OASIS – I quickly became immersed in and addicted to the world. As someone born in 1983, I was too young to know of everything Cline mentions in the novel, but many of them are general enough that even the most passive existence in the 1980s and early 1990s will mean you’re familiar with, at least, the music and movie references found within. The gaming references are perhaps more obscure, but Cline does a wonderful job of filling us in, so readers should never be lost, and even someone who doesn’t like any form of gaming should still find it an enjoyable, escapist novel.

The novel is, in a word: endearing. This makes it sound twee, perhaps, but really Ready Player One is pure, unadulterated fun. Sure, if you grew up in the ’80s, play video games, role-playing and other lovely geeky things you’ll get more out of this. But that by no means excludes those who weren’t born in the ’80s and don’t love all things geeky. (I was only seven when the 80s finished, and was living in the UK for the first time – I knew nothing – but I am a geek, so I did get a fair few of the movie and role playing references.) This is a fun adventure story, and a human tale, populated by many interesting and entertaining characters.

The novel contains a fair bit of damning commentary on contemporary politics and society, as well. It is all intelligently woven into the story – be it a comment about the future of energy resources or the power of corporations. This future has been ravaged by what appears to have been a total incapacity of American government to fix its political problems – income inequality is horrifying, energy prices are prohibitive, and corporations are exceptionally powerful. The first page, even, has a quite damning critique of today’s society and media agenda/environment – the death of a celebrity is covered as more newsworthy than the other chaos going on (wars, energy shortages, poverty, famine, and so on). It’s not a central element to the novel, but I thought it was an excellent inclusion that added another, non-preachy element of social commentary, and elevated it above mere nostalgia.

Cline’s prose is very well-crafted. The dialogue is realistic and often amusing – there aren’t many laugh-out-loud moments, but I did find myself chuckling and smiling almost every other page. The story is very well paced, but there was a slight, brief dip in momentum just after the half-way mark, but I do think the way Cline wrote this part still works within the overall novel (not going to tell you what it is – it’s really integral to the awesome ending).

There are so many components making up the novel, drawn from classic genre themes: we have a quest, we have intergalactic exploration, a mega puzzle, a (geek) love story, epic battles, some mystery and thriller elements, and the rise of a new hero (who is confronted with all the classic issues and hurdles one would expect him to face). All of this is wrapped up in an obvious love for genre fiction, video games and everything stereotypically and delightfully geek. A review of Ready Player One could easily descend into a gushing fanboy freak-out, picking up on the various references and allusions contained within. That, I think, would seriously spoil things for people who haven’t read the novel yet.

Ultimately, as I hope has been made clear, this is an endearing and charming novel that is fun, addictive and uplifting all at the same time. I thoroughly enjoyed reading it, and I think I can honestly say that I loved it.

Essential reading for all genre fans of all stripes. Really very highly recommended.

Want to know more about the book? Visit the great, 1980s-themed website.