“Sympathy for the Devil” by Justin Gustainis (Solaris) 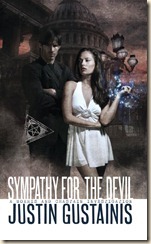 Presidential candidate Senator Howard Stark has been secretly possessed by a demon. Hell wants to put Stark in the White House, where he will use the powers of the presidency to destroy the world. Although originally thought to have little chance for the nomination, Stark has been eliminating the competition, through “accidents”, “suicides”, and the revelation of scandalous information that no human could possibly possess. Quincey Morris and Libby Chastain know what Stark is up to, and are determined to stop him before it’s too late. Their only obstacles: the U.S. Secret Service and all the powers of Hell itself.

The premise for Sympathy for the Devil hooked my interest as soon as I read it. This is the third novel in the Morris & Chastain Investigations series, following the exploits of paranormal investigator Quincey Morris and his white witch ally Libby Chastain. I’m usually a little hesitant about Urban Fantasy – for some reason, it just isn’t a subgenre I’ve loved – but the political thriller element of this novel was too interesting for me ignore. This is great fun, original, gripping, and addictive.

After a good, atmospheric and intriguing prologue (which leads to Stark’s possession), the novel quickly moves into a fast-paced supernatural thriller. Morris and Chastain are reunited as the events surrounding the primary election turn darker, each called in by separate parties to look into the bizarre happenings that seem to follow in the wake of Stark’s rise in the polls. We are taken into the workings of the campaign, as well as the world of demons, witchcraft, resurrection, and exorcisms. With its solid plotting, and fluid prose, it’s extremely difficult not to get swept up by the novel.

I haven’t read the first two books in this series (which I’m now kicking myself over), and there’s always a concern when jumping in partway through the story that you’ll be completely lost. Luckily, I didn’t feel adrift, I wasn’t made to think I’ve missed major points by not reading the previous two novels. The two main characters already feel well-rounded and developed, and one gets the sense that Gustainis is already comfortable writing them, despite it being relatively early in the series. This made it very easy to read about them. Even his non-recurring characters are realistic and three-dimensional.

Given my long-time interest in US politics, I was happy to find some great D.C. observations and commentary in here – ranging from law enforcement processes to the pettiness of Beltway politics and cutthroat electoral politics, there’s a lot in here to please thriller and politics fans. There is, of course, also lots to please fans of occult- and urban fantasy. Sympathy for the Devil is the first novel in this sub-genre to actually entertain me all the way through and have the detail, mysticism and real-world-grittiness that I think the genre lends itself to so very well. This is really great stuff, and I was left wanting so very much more after I finished the final page. I’ve actually been surprised how infrequently we see a blend of political thriller and supernatural fantasy – as Gustainis (along with Christopher Farnsworth), have clearly shown, it offers great opportunity to be creative and entertaining, while also allowing for some amusing, oftentimes insouciant commentary on today’s political environment.

In addition to US politics, we learn a little about the politics of Hell, which forms a central element of the plot (one I shall not spoil – but the two main characters involved in it were my favourite in the novel). Unsurprisingly, Hell is a mess of plots and counterplots in motion, factionalism and, of course, dirty tricks. This makes for a very intriguing and entertaining addition to the novel.

The scandals used to skewer Stark’s opponents are familiar – they have all happened (with variations, of course) in real life, and Gustainis includes details of their real-world counterparts on occasion (even mentioning Joe Biden at one point). It’s another fact that adds a sorry indictment of the state of contemporary American politics, particularly presidential politics. It’s quite nicely done, and Gustainis has clearly done a lot of research to make sure this novel is politically accurate. Add to this his prodigious imagination and interesting take on the supernatural, and I would go so far as to say this novel is damned near perfect.

There’s no escaping comparisons to Jim Butcher’s Dresden Files due to genre and aesthetic similarities (they also share some noir-ish sensibilities). For me, Sympathy for the Devil was better than early Dresden Files novels, which for whatever reason never really grabbed me. Gustainis is not at all squeamish, which gives some of his scenes a more visceral feel than what I found in the other Urban Fantasy novels that I’ve tried. This novel also benefits from not descending into Paranormal Romance, a subgenre that, I’m afraid, has thus far totally failed to engage my interest (that being said, there is an oddly sweet budding-romance in the novel).  The novel includes the best elements of both the thriller and supernatural/horror genres: one finds in a straight political thriller (think Richard North Patterson, John Grisham, etc.), with shrewdly-observed electoral politics and dirty tricks, only it’s given an original twist and supernatural shine that allows Gustainis to play around with traditional genre tropes to make something fresh, new and very rewarding.

Dark, original, and well-written, this is a great novel, bridging perfectly the two genres. I thoroughly enjoyed this novel, and am definitely a convert to Mr. Gustainis’s fiction.

[Justin Gustainis has also recently had Hard Spell published by Angry Robot Books, and I shall be reading and reviewing it very soon.]

Posted by Civilian Reader at 9:34 AM