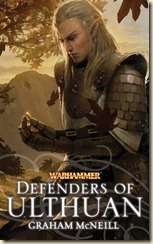 Honour, betrayal, and millennia of hatred

The high elves have long been the protectors of the Warhammer World, and their homeland of Ulthuan is known for the powerful magic that surrounds it. At the heart of Ulthuan lies a magical vortex, and the mages who created it remain trapped in a space out of time, endlessly working the spell that keeps the world from becoming a seething Realm of Chaos.

When Ulthuan comes under attack from the forces of Chaos and dark elves led by the Witch King and the hag sorceress, Morathi, the high elves must hold firm or face disastrous consequences.

Originally published in 2007, Defenders of Ulthuan is part one of Graham McNeill’s Elf duology, charting the struggles of two brothers and the millennia-long conflict between the High Elves and their Dark Elf kin. I’m mostly familiar with McNeill’s Horus Heresy novels, so it was interesting to read this earlier Warhammer novel. I’m a little on the fence about the novel, if I’m honest, as it is only the first half of the story (which concludes in Sons of Ellyrion). Nevertheless, it shows a love for the subject material, solid action, and the authorial skill we have come to associate with McNeill.

Defenders of Ulthuan has a pretty broad cast of characters, and through the various perspectives, we are shown the opening moves of a vast Dark Elf invasion of Ulthuan, the home of the High Elves. Two Ellyrian brothers form the core of this novel, Eldain and Caelir – the latter mysteriously returning to Ulthuan with no memory after months held captive by the Dark Elves. In addition to the two brothers and those they meet along their journeys across Ulthuan, we are introduced to a number of High and Dark Elf warriors and leaders – some mighty heroes and villains (Teclis, Tyrion, Morathi and the Witch King), and some wholly new and lowly. The variation of perspectives gives Defenders of Ulthuan a very personal feel, as despite the momentous events taking place, we see it predominantly through the eyes of those on the periphery and also in the way. McNeill does, at times, draw back and offer up some welcome background and history to events. (For me, this helped refresh my memory of the High Elf history – it’s been almost two decades since I last read early High Elf and Dark Elf histories.)

This is a well-written novel, but I did sometimes find it a little difficult to sink into, particularly towards the beginning. This can largely be put down to normal and expected ‘settling’ issues, as we get used to this new society. As the story progresses, we get more familiar with the characters, society and geography and it becomes much easier to get swept up by McNeill’s story and prose. Also, around the half-way mark and also the final couple of pages, readers are in for a couple of big surprises that will grab their attention (I certainly didn’t predict a couple of the twists, having drawn false conclusions from a couple of red herrings McNeill wove in).

The prose in Defenders of Ulthuan can sometimes be a bit florid, and certain passages of description seemed just a little too long. In a way, I suppose it matches the nature of the High Elves, who are a very aesthetic race. Dialogue and exposition is written in a quite formal manner, which also matches the nature of the elves, but it does have an impact on the novel’s momentum, as it is not quite as brisk as one might like, or as assured as McNeill’s recent Horus Heresy novels.

Some of the best bits are when we are with the Dark Elves (particularly the Witch King), or at least when the Druchii are around – their assassins, warriors and so forth add some welcome, evil colour. The juxtaposition between the haughty and elegant High Elves and the sadistic, malicious Dark Elves is very well portrayed and I really liked the way McNeill differentiated the two sides.

When we meet Tyrion at the court of the Everqueen, and other scenes set in Avelorn, I was reminded a little bit of Rothfuss’s writing when he sends Kvothe off to Felurian’s court – only, McNeill writes with much less purple prose than we saw in Wise Man’s Fear. Rhianna, the wife of Eldain (and former betrothed to his brother), and a number of other characters can sometimes be a tad over-emotive, frequently weeping at the beauty of this or that – this, to me, didn’t jive with the impression of the High Elves. Sometimes, these instances came a little too close together, which made the novel seem slightly over-wrought and the characters weaker than they are.

One of the key themes that comes across in this novel is that of the proud High Elves in decline, and their frustration with their inability to halt or reverse it. For example, upon arriving at the Elven city Tor Yvresse, Caelir notes its emptiness, which is mirrored in some ways by the High Elf race as a whole:

“Their route carried them along a wide, tree-lined boulevard, the marble-fronted mansions ghostly in their emptiness and the towers that rose above him on the hills seeming to stare down at him with bleak, forlorn gazes… Throughout the city, they saw daily life continue, but the more Caelir saw of it, the more it seemed that people were simply going through the motions. It was as though a part of them had died along with those who fell in battle and were just taking their time in lying down.” (141)

I think it would have been nice to spend a little more time with characters like Alathenar (a master bowman at the Eagle Gate) and the Ellyrion reaver, Eloien Redcloak, as these two showed a lot of promise. They seemed to be much more sensible, and as non-nobles, they are on the front lines, the danger posed by the Druchii more immediate. And, if I’m honest, the chapters that focussed on them and their comrades had some pretty awesome, visceral action scenes. In some ways, they were more interesting to me than Eldain and Caelir (although, the latter’s amnesia and mysterious return to Ulthuan are interesting). I’m hoping they turn up in Sons of Ellyrion. I can imagine a lot of people who read this in 2007 must have been very frustrated to not have the sequel released soon afterwards. Now that it has been published, however, I think Defenders of Ulthuan takes on the feel of ‘part one’, rather than ‘unfinished’.

Some may find the story a little slow or perhaps even meandering, while others will welcome the measured pace and the obvious interest the author has for his subject and characters – there are some great passages of background, which reminded me of the earlier material that was available on the High and Dark Elves. Ultimately, there’s a lot going on in this novel – including a lost hero returning, betrayals, sneaking assassins, noble sacrifice, elite hubris, and a millennia-old hatred between races that continues to tear the dwindling Elf races apart, fuelling their ever-worsening decline and shrinking populations.

Considering the incredible climax of this novel, and also how much McNeill has improved as an author – in terms of characterisation, writing and plotting – Sons of Ellyrion has the potential to be superb, so I’m particularly looking forward to reading sometime in the next couple of weeks (schedule permitting). I strongly advise you buy both novels together, as I can’t imagine anyone who reads the final pages will be able to wait long before diving straight into its sequel.

A solid opening half, Defender of Ulthuan showed McNeill’s promise as an author, and sets the stage for what will hopefully be an awesome concluding half in which the stakes will be raised, the action more intense and bloody, and the personal stories of those involved more real. Recommended.

Posted by Civilian Reader at 11:03 AM