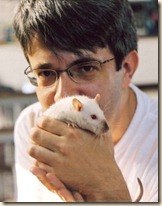 In this latest instalment of the Civilian-Reader “Influences & Inspirations” series of guest posts, Jasper Kent walks through the Russian history that has inspired his three novels to date (Twelve, Thirteen Years Later, and newly-published The Third Section), and discusses the inspirations for the fourth book in the Danilov Quintet, which will be released next year.

It’s an apposite question just now. The latest instalment of The Danilov Quintet, The Third Section, is even as I write being sent forth into the world (or at least the UK – USA in October) to receive the judgement of readers, but for me its history. Looming on my horizon is the fact that book four in the series is due for delivery to the publisher in little over a year, and currently I’m faced with a blank page, a blank screen, and a blank mind. 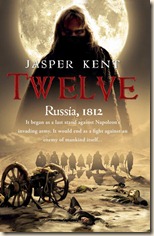 A clear idea of where I get my inspiration would be very handy right now.

At the beginning of a series, inspiration is all. For me it was the slow, cold horror of the French retreat from Moscow in 1812. The idea that vampires might be feeding off the weak and the dead was not difficult to conceive – and the idea of Twelve followed quickly on.

The inspiration that Twelve should be the first instalment of a quintet was unsought. I was watching a production of R.C. Sheriff’s Journey’s End – set on the Western Front in the First World War – and I was reminded of how little I knew of the Eastern Front in that war. With the unlimited lifespan of a vampire, I realized that the story I had begun in 1812 should end in 1917. It seemed quite obvious. 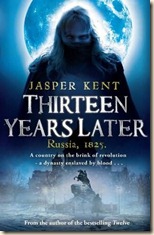 But each book still needed its own inspiration. For Thirteen Years Later it was an historical mystery: the myth maintained within the Russian royal family that Tsar Aleksandr I did not die, as is generally believed, in 1825, but lived for forty years more. There are a dozen theories as to what happened, and it was easy enough for me to invent another.

But historical inspiration is not always available. In writing a quintet I’ve found the need to inspire myself. It’s obvious enough that I should end a novel in a way that leaves the reader wanting more, with problems left unresolved and characters whose stories are incomplete. But it’s just as important that I have these loose ends to inspire myself – to make the next novel as interesting to write as it will be to read. More so; it’s a bigger investment of my time than it is of the reader’s. 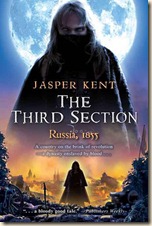 For The Third Section, there was no single, obvious historical event to motivate me. The Crimean War was – truth be told – a very dull war. It might have been enough to inspire Tennyson, but I’m no Tennyson. The Third Section is a very human story; a resolution of the problems that Aleksei Ivanovich Danilov left for his family when he went into exile. A partial resolution.

For book four, provisionally titled The People’s Will, I’m lucky to have both forms of inspiration. The problems I left for my characters at the end of The Third Section, plus one of the most pivotal events in nineteenth century Russia: the assassination of Tsar Aleksandr II. Even by the standards of the day, Aleksandr was no liberal, but he did more to liberate his people than any tsar in the preceding hundred years. His death brought power to his reactionary son Aleksandr III and thence to the ineffectual Nicholas II. There was no surprise in the revolutions that followed.

Last week marked the fiftieth anniversary of the building of the Berlin Wall, an event whose causes can, without too much meandering, be traced back to Aleksandr’s murder. But last week was also the twentieth anniversary of the coup that attempted to remove Soviet president Mikhail Gorbachev from power. His fate can be seen as similar to Aleksandr’s . The tsar lost his life at the hands of those who wanted reform to be faster, the president lost power to those who wanted to reverse his changes. Gorbachev was luckier, in that he kept his life and his reforms, though after him change came dangerously fast. But both men knew they had to tread a fine line between reform that was either too fast or too slow. Both failed, as most who have attempted the same thing do. Those who allow nothing to change have the best hope of staying in power. Gaddafi looks at what has become of Mubarak and chooses a safer course – for him.

But enough of that. I’m off to work on The People’s Will, feeling a little more inspired.

For more information on the series, visit Jasper’s website.

Posted by Civilian Reader at 10:04 AM