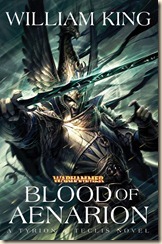 The opening chapter in the Tyrion & Teclis trilogy

Tyrion is an unparalleled swordsman, a superlative warrior and tactician from birth. He inspires courage and loyalty in those around him.  Teclis, born wasted and unusually sickly for an elf, is supremely gifted in magic. The greatest natural sorcerer of the age, his power will grow to rival that of fabled Caledor.

From their humble origin in the wild lands of Chrace, Tyrion and Teclis were meant for a great destiny. They come from the line of Aenarion, the first king of Ulthuan and cursed champion of that magical island. As they come of age, Tyrion and Teclis are sent away from their peaceful home to Lothern, capital city of Ulthuan, where they are presented to the Phoenix King, as all members of Aenarion’s bloodline are, to be tested for signs of the Curse.

When an ancient enemy returns to Ulthuan and starts systematically killing those of Aenarion’s bloodline, the twins’ are taken to Lothern for their protection.

This is the first Warhammer novel from William King in eight years, and I must say I’ve been really looking forward to it. Focusing on two of the greatest heroes from the Warhammer canon, it is also a very ambitious one. But, thankfully and unsurprisingly, King is fully up to the task. This novel more than exceeded my expectations. Welcome back, Mr. King!

This is the first novel in a trilogy that will tell us the story of the High Elves’ greatest heroes: Tyrion, who will become the Champion of the Everqueen and Ulthuan’s greatest protector; and his brother Teclis, councillor of the high elves and supremely talented mage, who was also one of the first to teach magic to the race of men and gave them the means to defend themselves against Chaos.

However, Blood of Aenarion is set decades, if not centuries before Tyrion and Teclis fulfil their promise (it’s a bit difficult to tell, given how long-lived the Elves are). In this novel, they are only just 16-years old, making their first steps into High Elf society and politics.

The novel opens with the first Phoenix King Aenarion, and his last battle to save Ulthuan and the world at large from the ravages of Chaos. It also explains the Curse of the bloodline – that descendants of Aenarion have the potential for great good or evil, a burden that each must carry and face.

Aenarion’s campaign against Chaos showcases a veritable who’s-who of Chaos beasties, and it showcases King’s ability for writing intense battle scenes. That being said, this is not an overly action-packed novel. True, N’Kari’s campaign against the descendants of Aenarion offers up some pretty gruesome and brutal attacks on Elf towns and forts, and there is a superb, climactic battle at the end. But, for the majority of this novel, we spend time with Tyrion and Teclis adjusting to their new life in the Elf capital, Lothern, and starting their training: King has turned this novel into a classic coming-of-age story.

It was great to see these two characters as kids, a period of their lives thus-far unexplored in the literature. Raised away from the centres of power and intrigue, the twins are largely unaware of what it means to be a descendant of Aenarion. When two emissaries from Lothern arrive to collect the twins for their political debut, we learn how the Curse of Aenarion is confronted in this age of the Elves. There are equal levels of suspicion and hope with regards to the first Phoenix King’s heirs. That the brothers are twins, one hale and one infirm, is also the cause of many unsavoury rumours among the High Elf nobility. The need to be “tested” for the curse by the Phoenix King hangs over the twins for the majority of the novel, particularly Teclis, who worries that his infirmity is a sign that he carries the curse – something that would result in either death or imprisonment.

King’s writing has a great flow. It’s a steady story, and King takes us through the twins’ journey to Lothern, their exploration of the city and learning about the political rivalries of the city, and then to their testing with great skill. The brothers are both possessed of considerable, innate talent in battle (Tyrion) and magic (Teclis), but King has done an excellent job of not making it appear too easy for them. They do not morph from unskilled children into master-level warrior and mage overnight. Indeed, they remain largely unschooled at the end of this novel – although they are clearly exhibiting some of the skills they will eventually come to master. There are mistakes made and lessons learned, and King has made their progression feel very natural.

He has also made both the main characters and the elves as a whole far more nuanced than I expected. Tyrion, especially, is interesting – seemingly so pure and noble, yet with a deeply buried anger and malice that can be awakened and unleashed with the right goading. Tyrion, at one point, is particularly cold – it’s chilling to see how detached and emotionless he can become. Tyrion and Teclis discuss openly between themselves their concerns about carrying Aenarion’s Curse, admitting to each other their darker emotions and reactions to certain events. It made them more relatable – they are not the perfect heroes lore would have us believe. They are exceptionally gifted, but flawed individuals, who exhibit all the character traits of the elves, both good and bad: they have their grace and intelligence, but also their arrogance and fears.

It’s worth discussing another character at a bit more length: Urian, a Dark Elf spy, who is a very interesting character and certainly the most intriguing after the twins. I can’t go into too much detail about who he is or what his part he plays in the story, but he's a much more nuanced Dark Elf than I’m used to reading about, and that made him one of the most interesting and engaging characters in the novel. I really liked the way King has portrayed this character and also Malekith the Witch King, making the Dark Elves far more like their High Elf kin than some other authors have in the past – they are clearly more sinister and brutal, but still remain very similar in many ways.

Origin stories about well known characters are always interesting. They can also be tricky: The author runs the risk of writing a story that is entirely without tension or surprises. Thankfully, King has managed to avoid this potential pitfall, and Blood of Aenarion has plenty of both – even though we know he can’t die in combat, for example, there were a couple of times when I was anxious about Tyrion’s chances.

King’s writing is great: quickly-paced prose speeds us through the novel (I read it in three very enjoyable sittings, late into the night). The story is detailed and fluid, but never gets bogged down by exposition. The lower level of action may not suit some Warhammer fans, but I think King has crafted a very good story, here. The action he has included is superb. Relying on the readers’ familiarity with the setting, King allows the story to build young Tyrion and Teclis’s world. All of the characters are very engaging and well drawn. There’s really nothing bad I can say about the novel, except perhaps the fact that it ended (and slightly abruptly, at that).

In Blood of Aenarion, Tyrion and Teclis, great elf heroes whose names have littered almost every text Games Workshop has released featuring Elves, are brought brilliantly to life on the page. I can’t wait for the second novel, Sword of Caledor.