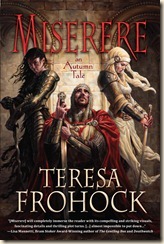 Exiled exorcist Lucian Negru deserted his lover in Hell in exchange for saving his sister Catarina's soul, but Catarina doesn't want salvation. She wants Lucian to help her fulfill her dark covenant with the Fallen Angels by using his power to open the Hell Gates. Catarina intends to lead the Fallen’s hordes out of Hell and into the parallel dimension of Woerld, Heaven’s frontline of defense between Earth and Hell.

When Lucian refuses to help his sister, she imprisons and cripples him, but Lucian learns that Rachael, the lover he betrayed and abandoned in Hell, is dying from a demonic possession. Determined to rescue Rachael from the demon he unleashed on her soul, Lucian flees his sister, but Catarina’s wrath isn’t so easy to escape. In the end, she will force him once more to choose between losing Rachael or opening the Hell Gates so the Fallen’s hordes may overrun Earth, their last obstacle before reaching Heaven’s Gates.

It took me a little while to get to Miserere, but after hearing quite a few good things about the novel, I decided it was high time that I gave it a try. Another of Night Shade Books’ New Voices releases, this is a dark, brooding tale of redemption with an original setting and engaging characters.

Lucian has been kept as an effective prisoner by his sister, as she slowly consolidates her hold on their city. One day, he meets a priest who helps him escape. What follows is a tour of the different regions of the Woerld, as Lucian evades his sister’s operatives. On his journey, he stumbles across Lindsay, a young lost girl brought to Woerld through the veil. Through Lindsay’s eyes, we learn a little more about how the Woerld and its magic works, what the faiths mean, and so forth. This is very skilfully done, never feeling like an info-dump or excessive exposition – her perspective is a perfect device to introduce us fully to the setting, as the novel progresses.

Frohock has drawn on a broad range of Christian and other religious mythology to create her ‘Woerld’ and its relation to Earth. They are parallel universes, of sorts.

“Heaven, Earth, Woerld, and Hell – [all] interrelated with one another. The four realms were like four lakes joined by tiny streams; toss a pebble into Hell and the ripples would extend to the farthermost reaches of Heaven.”

In Woerld, the religions of our reality are “bastions” that work together (and learn from each other) to prevent the Fallen from getting to Earth. It is an eternal struggle, and if war breaks out in Woerld, the repercussions and violence can spill over into Earth.

It took me a little while to get settled into the story, because I wasn’t sure how it all fit together. Nevertheless, it is clear from very early on that Frohock has created a very interesting world – drawing on religious mysticism, the occult and other supernatural elements (with a dash of horror, too), to create something very original and engaging. There’s a little bit of dimension-jumping near the beginning, which I hadn’t expected, but things settle down and we’re presented with a tale of classic themes: palace intrigue, Machiavellian agendas, a damaged hero seeking redemption or punishment, a sinister plot of epic proportions and apocalyptic potential. It’s good-vs.-evil, but writ across a great, original landscape.

The characters are great, well-crafted, realistic and diverse. They all have their own identities and voices, even the minor ones. The three main characters are quite broken, dealing with their own inner demons and tragic pasts – Lucian wallows in it, Rachael endures it, Catarina revels in it. Catarina, the “darkling”, is sinister and wonderfully twisted, ambitious in the extreme, seeking the power of a goddess. I was a bit disappointed that she didn’t seem to feature that much in the second half of the novel. Rachael is proud and determined to maintain control over herself, to not give in to the Wyrm that has possessed her, slowly eating away at her self. Lucian merely seems to endure, spreading what little dissent and warning he can against his sister’s activities and emerging dark regime. When Lindsay appears, Lucian finds a new purpose – one that should be closed to him, but one he embraces nonetheless, hoping it holds the keys to his redemption.

Miserere is very deftly and tightly written, and I quickly came to care for all the (“good”) characters, and became invested in their survival. The pacing was not fast, but neither was it slow – it moved steadily, amd Frohock’s prose pulled me on throughout. I found myself irritated when life demanded I do something other than read. It’s a fascinating world, populated by interesting characters. There’s also more action as Catarina’s minions hunt for Lucian, and that, too, is well-written.

There’s been a lot of confusion as to what sort of novel this is meant to be, due to the “religious” content. Yes, it’s true that Frohock has drawn on religious imagery, mythology and even the language of faith and prayer. But, this is not a “religious fantasy”. It is no more religious than the TV show Supernatural is. It draws on religious mysticism and the occult (sort of), but does not preach any religious message. It’s an aesthetic and sub-genre I’ve always found interesting, and Frohock has taken it and put a whole new spin on it, making it feel entirely new and fresh. I really enjoyed this.

Highly recommended, this is a superb debut. I’ll be keeping an eye open for more of Teresa’s work, and I’m very keen to find out how this series develops.