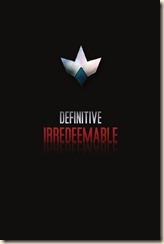 What if the greatest superhero switched sides?

I’d been considering this title for a long time, and when I finally managed to try it out, it was this mega-edition. I really liked the idea behind the series – it seemed so simple and yet innovative at the same time. After reading this book, I quickly realised that all the hype about the series is completely justified. The story is gripping, original, moving and superbly rendered. This exceeded my already high expectations. This was a very difficult review to write, as I really just wanted to say, “This is incredible. Buy it.”

The first Chapter of Irredeemable (basically the first collected edition) opens up with a shocking and brutal scene – let’s just say we are left with no doubt as to the Plutonian’s homicidal tendencies. The reader is dropped straight into the story without any lead-in, right into the action. We are quickly introduced to most of the Plutonian’s former teammates, the other superheroes collectively known as “The Paradigm”, who he is now hunting down and systematically killing, one by one. They know of his powers and methods, but now they have to figure out how to stop him. General consensus – from the Paradigm and the population as a whole – is that the future is very bleak indeed.

“You don’t get it. The Plutonian has gone rogue. We’re all going to die.”

Many of the acts the Plutonian commits over the course of this collection are truly horrific: homicidal and genocidal, and even the ‘smaller’ actions are cruel in the extreme.

The members of the Paradigm have taken it upon themselves to bring an end to the Plutonian’s reign of terror. Which is a tough job, given the fact that his powers are basically god-like, limitless. It is through their investigation that we learn of the Plutonian’s history as a hero. He’s the perfect hero, Superman-esque in his perfection. Take this frame as an example:

But, as could be expected, the Plutonian slowly becomes more and more disillusioned with his protectees, and his story morphs into one of endless disappointments and ever-greater demands. The Plutonian, in other words, shows his human side. And it’s a fascinating history, particularly how the people he protects seem to constantly let him down – for example, wilfully revealing his secret identity without thinking of the consequences, never satisfied, always demanding more from him. They are, as the Plutonian says, the

“miserable, bitter, ungrateful paramecium who lash out at you in a state of perpetual rage for not solving their problems fast enough.”

There’s a lot of nuance to this story – nobody is perfect, and it seems that, while the Plutonian’s reaction has been utterly out of proportion to the wrongs and disappointments he experienced, it’s not a case of his switch coming completely out of nowhere. He has been betrayed and let down by everyone, in one way or another. In addition, as they hunt for a way to stop his, the Paradigm uncover a number of fractures within their own ranks: rivalries, jealousies and, in one instance, a case of hidden megalomania…

The writing, dialogue, and pacing are great as is the occasional dark humour. Waid has covered all the bases – every questions I could come up with when I read of the premise, also those that arose as I read the book, and way more besides, are answered and confronted in the story. He has written some complex and engaging characters. 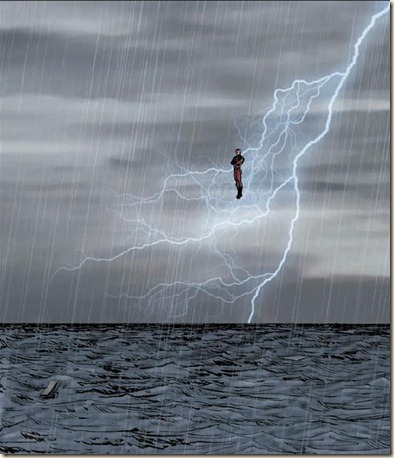 The artwork is great – it has a classic feel, but updated for the modern reader. There are some truly awesome full-page compositions, too – many come at the end of what would be the single issues. Krause is able to pack a hell of a punch – both visual and emotional – into just one picture. Waid and Krause are an amazing team, and there are so many scenes that are genuinely powerful. For example, the final page featuring Joey Daniels almost made me choke up, and haunted me for a couple days after finishing the book. It’s an incredibly affecting and effective scene. It’s a long time since a novel had this sort of effect on me, so I was very surprised at how much emotion could be instilled into a comic. It’s heart-wrenching.

The Definitive Collection is a great book. Along with the first three collected books of Irredeemable proper, includes a ton of bonus material. First up, we get “Irredeemable: Special #1”, which is comprised of three stories focusing on Hornet, Kaidan and Max Damage (the star of Waid’s companion series, Incorruptible), and gives us a little bit more background for each of them – in the case of the latter, it’s about where Max first meets his sidekick, Jailbait. There’s a great Foreword by Morgan Spurlock (of Supersize Me fame); an Epilogue by Mark Waid; an Afterword by Grant Morrison; a recreation of Waid’s pitch for Irredeemable; a covers gallery; and a concept art gallery. So, there’s a hell of a lot collected into this hardback. It’s pricey, yes, but if you’ve tried even a little bit of this series, then you know how good it is. If you can’t stretch for this collection, then the three books contained within here are still readily available and also highly recommended. Basically, I think you should just try to read this in any (legal) format you can. 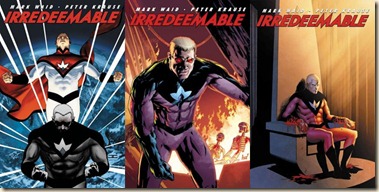 It is now clear to me just why this series is so popular – it’s spectacular, as well as highly original, intelligent and thoughtful. An absolute must for anyone interested in comics, superheroes, and great stories. Think Watchmen was good? This’ll blow your socks off. This is not only a story of superheroes gone bad, it’s an examination of everything it means to be human and be a part of society. This is quite possibly the best comic series I’ve ever read. It’s amazing.

This book, and series as a whole, couldn’t come with a higher recommendation. I’ll be reading the rest of the series from here on, catching up first with the collections and then individual issues. I’ll also be keeping up with Incorruptible.

This is, in my opinion, essential reading.