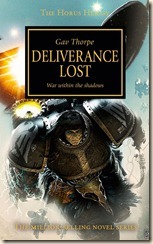 As the Horus Heresy divides the Imperium, Corax and his few remaining Raven Guard escape the massacre at Isstvan V. Tending to their wounds, the bloodied Space Marines endeavour to replenish their numbers and return to the fray, taking the fight to the traitor Warmaster.

Distraught at the crippling blow dealt to his Legion, Corax returns to Terra to seek the aid of his father – the Emperor of Mankind. Granted access to ancient secrets, Corax begins to rebuild the Raven Guard, planning his revenge against his treacherous brother Primarchs. But not all his remaining warriors are who they appear to be… the mysterious Alpha Legion have infiltrated the survivors and plan to destroy the Raven Guard before they can rebuild and threaten Horus’s plans.

The Horus Heresy series is one of the best collaborative sci-fi series currently being published, in my opinion. All of the authors working on it bring their A-game, producing some of their best fiction. Deliverance Lost is Gav Thorpe’s first novel for the series, and it is excellent. Like some of the other, more-recent Heresy novels, it offers something new and takes a slightly different approach to the fictional time and setting. Deliverance Lost is great – nuanced, tense and action-packed. I thoroughly enjoyed it.

Deliverance Lost picks up right where The First Heretic finished up – in the aftermath of the betrayal at Isstvan, as the traitors hound the remnants of the Raven Guard across that planet. Thanks to some fortuitous timing, Corax and his near-decimated forces are rescued and whisked away, to Terra – where the Primarch insists on an audience with the Emperor. What follows are the Raven Guard’s attempts to rebuild their forces amidst considerable opposition and suspicion; and a shadowy enemy manoeuvring to finish the job Horus’s forces were unable to do on the landing fields of Isstvan.

[Something I should state: there’s an awful lot more to the plot than I’ve just laid out, but to go into much more detail would offer up some serious spoilers. This should also explain why not much attention is paid to the characters and their general development over the course of the novel – there’s a lot of intrigue, suspicion and hidden agendas, all of which should be read and experienced without prior knowledge.]

From the very beginning, it was clear that we were going to get a more intimate Primarch-experience with this novel, as the opening chapter (and much more besides) focuses more on what’s going on inside Corax’s mind than on others’ perceptions of his actions. Thorpe provides readers with more of Corax’s background, adding to our overall understanding of his history and the way it has shaped his approach to leadership and warfare. It’s deftly done, avoiding info-dumps – instead, we get Corax’s memories, evoked by ‘current’ events that inspire recall. I knew nothing of the Raven Guards before reading Deliverance Lost (which was one of the main attractions), but now I just want to read more! Thorpe has done a great job of fleshing out this lesser-known Legion, giving it a really strong character and populating it with engaging individuals. I really hope there’s another Raven Guard novel in the future.

Like all of the Legions, the Raven Guard are proud-bordering-on-arrogant. The betrayal at Isstvan was a tremendous blow to their psyche and confidence, and this novel is the story of how they worked to bring themselves back from the brink of destruction – however slightly. Corax becomes single-mindedly bent on succeeding in his Emperor-given mission, to the point where he becomes blinded to certain events around him.

We see how the Imperium has reacted to the news of Horus’s betrayal: with a martial efficiency and heightened distrust of basically everyone, reminiscent of the paranoia following 9/11. The Imperial Fists captain who controls stellar travel into the Sol system is not unlike a TSA agent on steroids… The Betrayal has sown seeds of fear throughout the Imperium, and we see the early stages of confusion as loyalties are determined.

There are both tension and distrust within the ranks of the traitors as well – Erebus, the ever-present manipulator continues to lurk at Horus’s side, and causing much of the discord. (Speaking of Erebus, I’ve never been entirely convinced of his position of influence – it seems to come out of nowhere and is just accepted. I would be really nice if someone wrote a little more in-depth about his story and rise to prominence.)

The Alpha Legion is one of the most interesting of the Legions (among, admittedly, many individually interesting forces), and their focus on subterfuge, espionage and so forth certainly promised an intriguing storyline. I wish we’d got a little more of the Alpha Legion’s story, but by their very nature it would have perhaps ruined things to learn everything about them. They are ultra-secretive – of all the Primarchs, he was the last to be found and united with his Legion, with a secret kept from basically everyone, including his fellow Primarchs: he has a twin. That being said, the picture we get of the Alpha Legion is interesting – the Primarchs are constantly working towards some great endgame we only know a little bit about, but are not true converts to Horus’s rebellion and certainly not to Chaos. The taint in the Word Bearers witnessed at Isstvan and elsewhere gives some Alpha Legionnaires pause as to whether or not their on the right side of things, and leads some of their operatives to quietly question the Primarchs’ wisdom of allying with Horus.

With Corax providing a considerable proportion of the narrative, it is a slightly different Horus Heresy novel – where others have mostly relied on the perspectives of Astartes and other soldiers, this novel has a lot from Corax’s and also Omegon’s perspectives. This I really liked – being able to see the differences in how a Primarch and Astartes confront challenges is one of the best things about Warhammer 40k fiction.

However, this does lead me to my one complaint about the novel, and that is in the character of Corax: sometimes, he comes across as a little too perfect; too much the ideal of what a Primarch (or any leader, really) should be. In the first part, he seemed to lack some of the nuance and duology-of-character that defines all of the other Primarchs that we’ve spent much time with (Lorgar and Magnus in particular). His character is fully revealed and fleshed-out as the novel progresses, but I must admit that I was sometimes worried in the first third of the novel that Corax might be a little two-dimensional. Even his fit of pique when denied immediate access to the Emperor was a little half-hearted, I thought. I don’t know if this was intended to elevate him above the other Primarchs in some way, but when you think that all of the others are deeply flawed and with multiple sides to their characters, Corax seemed just a little too pure. That being said he becomes far more interesting in Part II, as the events of Isstvan, his gift from the Emperor and the unfolding Heresy start to weigh heavily on him. He seems a little less stable, more quick to judge and prone to lashing out.

Deliverance Lost features quite a lot of references to the uprising of the Mechanicum on Mars. I think I’m going to have to get the eBook of Mechanicum (by Graham McNeill) to catch up on this and fill in the blanks (for some reason, I never read it when it first came out). It’s interesting, though, that the Astartes forces have less difficulty in accepting the loyalties of an Adeptus Mechanicus operative, but not all Astartes.

Thorpe’s writing is great throughout, and manages to avoid any and all cliche dialogue or clunky description. The pacing is, for the most part, very good – although there are just a couple of lulls in the action and overall momentum. Given the quality and scope of the story, though, they’re completely understandable and forgivable, as the reader is just pulled right along with the plot.

A very worthy addition to the Horus Heresy series, this is a must read for fans of the franchise. I love the differences in approach and style that are starting to appear in the series, and to me they prove just how much better the series has become and will hopefully continue to do so.

Also on CR: An Interview with Gav Thorpe

Posted by Civilian Reader at 7:19 AM