Servant of the Bones is one of Rice’s novels that I’ve never got around to reading. I’m not sure why, actually. When I saw this was now available as a comic-adaptation, I looked up the premise (below, after the break) and it sounded pretty interesting. I really love Rice’s Vampire Chronicles, and I consider The Vampire Lestat and The Queen of the Damned to be one of my favourite books (they go together so well, I count them as just one – I can never read them on their own). So, seeing as I’m becoming more familiar with the comic genre, I decided to give this a try. I find myself with mixed feelings about the series, although I should say they lean mostly towards the positive. 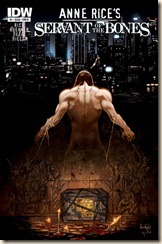 #1 – When a beautiful young woman is brutally slain in the streets of New York City, the demon Azriel sets out to discover who killed her, only to find a far more sinister plot that could end the world. Once a human in ancient Babylon, Azriel is a spirit of rage and terror that gradually rediscovers his humanity through holy vengeance and spiritual love.

#2 – Babylon. The city of gods and kings. Before he became a spirit of vengeance, Azriel was a young Hebrew who could talk to Babylon’s deity, Marduk. And it’s that unearthly connection that leads to his dark destiny, when the city priests and witch Arsenath prepare him to become a “living god.”

#3 – Azriel must submit to an ancient ritual and parade through the streets of ancient Babylon after his relationship with the cities most powerful deity, Marduk, is discovered. To save his city and his family, Azriel must become a living ‘god’, enduring the pain and horror of a slow, fiery, death to finally become the Servant of the Bones.

#4 – Azriel awakens in modern day New York City to witness the death of beautiful, kind, Esther Belkin. Moved by her brutal sacrifice, he hunts down her killers, only to discover that there’s more to her death than simple violence. Esther's stepfather, Gregory Belkin, is the head of the Temple of the Mind cult, and Azriel’s new master. But will this willful ghost heed Belkin’s commands?

If I’m perfectly honest, the first issue didn’t really grab me. It’s very nicely put together, and the art is great, but the story seems a little too vague for the moment. We’re introduced to Azriel and Jonathan, a historian who is going to take his story down. So far, so very Interview With the Vampire. Working with this successful device again wasn’t a problem for me, as I rather like the idea and think Rice is very good at using it to its best effect. However, there’s a lot of reference to the young girl who is murdered, but that’s it – references, but nothing else. Azriel and Jonathan talk about her but there’s not really enough in these issues to explain why she’s significant, but things do start to come to light in the fourth issue. 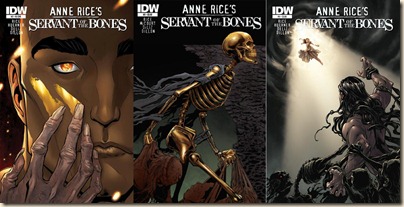 In the second and third issue, Azriel reminisces about his time in Babylon, how he adapted to life there, and how the Babylonian god Marduk appeared to him. We also learn how Azriel came to become the Servant of the Bones, how he was tricked by an old crone, lured to a painful death and an afterlife of servitude. The cruel ritual transformation is well-rendered. Azriel recounts his time as Servant, particularly with his first master, who taught him about his new nature. It also offers a tale that runs alongside the historical trials and persecution of the Jewish people – only, it rushes through much of history (something I think the novel would do better, with the benefit of more space).

In the fourth issue, we come full circle back to the death of Esther, and the story starts to move forward, as Azriel tries to discover who his master is in modern-day New York. This is also, in my opinion, when the story started getting really good, and I think things can only get better from here (with only two issues remaining, I really hope that they do).

The artwork is very nice – it alternates between bright and vivid on the one hand, and grim and gothic on the other. It has a very nice look – clean, but not too stylised, with some very striking imagery across the four issues I’ve read. Here’s a sample from issue three: 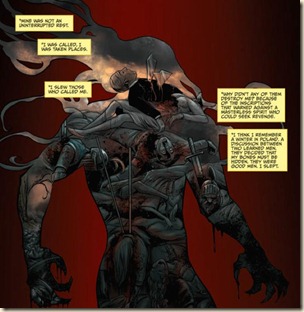 The third issue exhibited some of what I refer to as “Late Rice” – the almost overwhelming focus on the themes of (and use of the word) “love”. It’s not as prominent as it is in Blood and Gold, but it starts to creep in more and more in Rice’s writing as time goes by. Overall, though, the story across these issues is one of sadness, loneliness and desperation. Azriel tries to do only good, but he can only avoid commands so much, justifying terrible and brutal acts with his love for any given master.

This is a tale of murder, revenge, and redemption – all are among Rice’s favoured themes. She has carved out for herself a superb niche in fiction, and I’ve never found an author who can write about the same things in a comparable way.

Reading this comic series has made me want to read the novel, which I suppose is one of its purposes. Like most adaptations, there’s only so much a comic (or movie, or TV series) can give you of the original text and story. I’ve always been a fan of Rice’s writing – specifically her earlier Vampire Chronicles novels – but I never got around to reading her Mayfair Witches or stand-alone novels. I’ll try to get a copy of the novel and read it in the new year, as well as continue reading and reviewing this comic series.