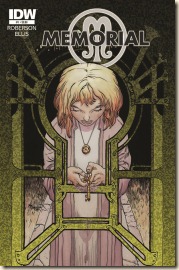 Memorial is the story of Em, a young woman who arrives at a hospital in Portland, Oregon, with no memory of her past. A year later, she has rebuilt her life, only to find her existence thrown into turmoil after she inherits a magical shop. The kind that appears in an alley one instance and disappears the next.

This debut issue has been quite highly anticipated by many comic readers, myself included, and I was very glad when I finally got my hands on a copy. It didn’t disappoint. That being said, it’s rather difficult to think of how to write about it without spoiling or describing everything.

It’s mostly setting the scene, so there are revelations aplenty, as well as some needed exposition (all dressed up perfectly as story and in some great artwork). The writing is tight and brisk, with some nice touches sprinkled throughout for anyone with an interest in classic fables, fantasy, and other literary allusions, only with a few original twists. The characters are shaping up in interesting ways, even though many of them will need some time before they are properly fleshed out (Em does, after all, have no memory).

Memorial is a series that has a lot of potential, and I’ll be watching it closely. At only 22 pages, this first issue is a tantalising glimpse into a new and interesting fantasy setting. Some people might have wanted more from a first issue, but my interest has been piqued enough for me to come back to it next time.

Posted by Civilian Reader at 5:20 AM