A short round-up of some of this week’s comics

As I’m outside of the US for the next few weeks (about a month and a half), my weekly round-ups will be a little less focused on new releases, as I do some catching up with collected editions. Wherever possible, I’ll review some new stuff, but otherwise they’ll have to be saved for February. Which will be fun for me at, the very least. So, this week we have a couple of catch ups and the new issue of Seven Warriors. 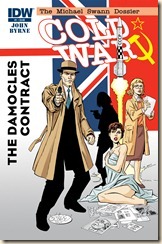 #1 – Introducing MI-6 agent Michael Swann. In Swann’s opening four-part adventure, The Damoclese Contract, the secret agent is called on to stop a defecting British scientist from granting the Soviets complete nuclear dominion over the free world…

#2 – Former MI-6 agent Michael Swann is now freelance and taking on the most dangerous of missions that the British government can’t officially undertake themselves. In “The Damoclese Contract,” part 2, Swann is sent on a wild chase across Europe to try to prevent the Russians from gaining nuclear dominion over the planet.

#3 – Former MI6 agent Michael Swann is racing against time to prevent nuclear dominion over the planet from falling into Soviet hands. Which is harder than it looks while preventing his own death aboard a train speeding across Europe in the dead of winter! 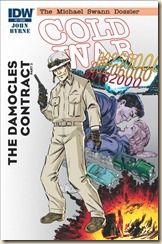 This was an interesting comic. The first eleven pages have no dialogue or text whatsoever. Instead, the pages visually follow our hero on a mission in Berlin and his flight from the scene. It’s nicely done, and Byrne manages to get a lot of story into the artwork. It’s a nice idea, well executed.

Swann is a bit of ladies man and spy of the James Bond mould. In the first issue, we get a crash-course in his nature and his relationship with those in positions of higher authority (yes, you guessed it – he doesn’t get on well with them), and he is sent on another mission. The second issue focuses on Swann’s investigation at the science centre, and we learn more about what’s going on there and who the spy really is.

When the dialogue does kick in, it’s frightfully British – on occasion it leans towards the over-done, but it’s not too bad. Otherwise, the dialogue felt natural and flowed well. There’s no excess exposition or description – Byrne manages to get it all across in the artwork. Speaking of, it reminds me of older comics, like the ones my dad read as a kid – Dick Tracy-esque, perhaps, less stylised and more vintage. Fits the premise very well and is nicely constructed and coloured. There’s a good amount of historical detail, which was welcome, too. This is a very well put-together comic. 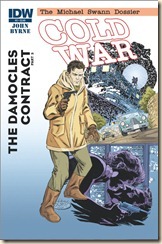 The series is pretty interesting, and should appeal to fans of Cold War fiction and spy novels – le Carre, Clancy, Flemming, Forsythe and the like. I like that the series isn’t all about action, but instead we have some more spy-craft – the sneaking about, snooping on conversations and infiltrating new situations and locations. That being said, there is a great car chase in the third issue, which also features some more action towards the end as well, as Swann’s plans evolve and grow in ambition as things become more international. The rural British setting is also an interesting difference, and Byrne uses it well throughout the three issues.

The first issue also includes an 11-page sample from Chris Roberson and Rich Ellis’s new series, Memorial, which is one I’m very much looking forward to. 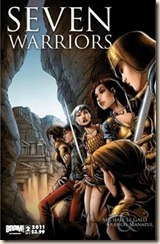 Picking up immediately where the first issue left off, we rejoin the party of warriors and their ward as they make their way through the hidden labyrinth under the city and out into the occupied port, and finally make their escape from Libya.

This issue has a lot of great action, and we see the ingenuity and battle skills of the warriors chosen to protect the prince. It’s a nice, alternative approach to historical comics – it’s a welcome change to have a selection of strong female characters who aren’t just objectified, instead of knights or similar male protagonists. They are confident and competent warriors, and come up with some imaginative solutions to the enemies they are faced with. They are also very focused and willing to give the last, greatest  measure of devotion to their cause.

We finally get some explanation for the random, first-page sex-scene from the debut issue – as I mentioned in my review of that issue, it seemed really out of place and its inclusion at the time was inexplicable, but now I see why it was there. The artwork is good again, rough-around-the-edges but still maintaining a good level of detail, and doesn’t look rushed or half-baked. I couldn’t really articulate why, but the style suits the time period and story.

With only one more issue to go, it’ll be interesting to see how Le Galli brings it to a close. 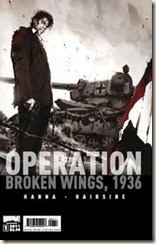 It’s 1936. A German intelligence officer is tortured by his superiors. They want to know why he has turned against them. Imprisoned, he gives up nothing as he seemingly waits for death…or the right time to strike.

The issue starts off with our ‘hero’ in a cell, before recounting how he ended up there, and also his role in the German army. Hanna’s version of Nazi Germany really comes to life – a hive of paranoia, professional rivalry, and persecution. In order to maintain his cover, our hero must work through his new mission, regardless of whether or not he has lost faith with his government’s agenda. As he executes his overall plan, we learn that the age-old adage is accurate: plans only last until the end of the planning stage. Once real life gets involved, things can quickly take unexpected courses. 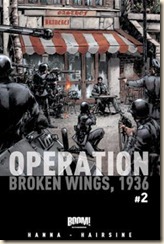 Very rough artwork – I do to prefer the cleaner, crisper style, but it works well with this story. There are a couple of scenes when it’s not as clear what we’re supposed to be seeing (the flashback to the day of the Beer Hall Putsch, for example, was unclear), but the grittiness of the artwork lends itself well to the themes running through the series.

This is a pretty cool comic. The historical detail is great, and there are quite a few neat little touches that refer to some of today’s most recognisable German brand names (Porsche, VW) and what their origins are. They’re minor touches and not important to the story, but they are indicative of the level of attention to detail that Hanna’s lavished on his story. I really liked the setting (both time period and physical location), and thought the premise was great.

I would say it’s a must for lovers of war fiction and historical thrillers.

Comparing it to Cold War, the other historical comic in this post, I would say that Operation: Broken Wings is much darker and ‘gritty’, so while I think people will be drawn to both for similar reasons, it should be pointed out that they have different tones. 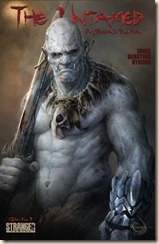 #1 – A cloaked Stranger slips into the rustic Town of Oasis, changing things forever. Ten years it has been since he ran this town with malice and harshness. Even then, there was hope for his soul. His wife and daughter were on the verge of turning him from wickedness. But they were murdered, and so was he. Now he has returned, hell-bent on killing.

This is one of the start-up series from new publisher Stranger, and it’s quite an interesting one. Set in a bleak, hard fantasy world, the first issue does not give much away about the Stranger or his agenda, although more detail is revealed as the issue progresses (I must admit to having needed the synopsis above to get a good starting point). The Stranger has made a deal to seek his revenge on those who killed his family, bartering souls for time back in the world.

The writing is good, with sparse narration and dialogue, and the artwork – very atmospheric and quite gothic – offers a brilliant and evocative counterpoint. Bergting manages to get a lot of story and intention distilled into his artwork, stripping the need for much exposition or explanation. It’s really very striking. Here’s a sample: 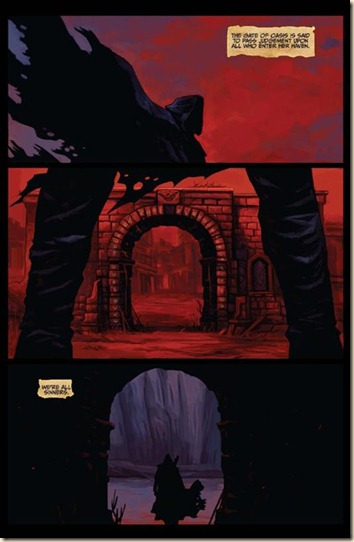 This is a story steeped in mystery, revenge, and redemption, and I think it has considerable potential. This was really a very pleasant surprise, and is well-worth seeking out. I’ll certainly be interested to read the rest of this series.

The issue includes a sample-preview of another debut title, this time Dusu, which does a good job of whetting the readers’ appetite for more. I’ll try to get hold of it and review it in a later round-up.

Issue #1 of The Untamed can be read free online. Also, check out a motion comic directed by Sebastian Jones, here.

Posted by Civilian Reader at 6:37 PM