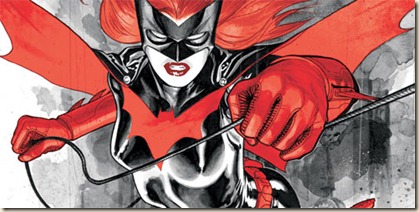 Another superb series, with a difference, in DC’s Batman Franchise

Here I finally get around to reading and reviewing the final Batman-related title of the New 52. This is a review of two parts. First, we have Elegy, a collected Batwoman graphic novel that I was told forms a good introduction to the events that take place in the New 52 Batwoman comics, which form the second part of this review.

Batwoman as a character and title to follow was attractive for a variety of reasons – most importantly the more gothic, horror-influenced storylines. I must admit, however, that it was the fact that Rachel Maddow wrote the introduction to the first Batwoman collection, Elegy, that really piqued my interest and helped me notice the title in the first place. I’m a big fan of Maddow’s, and saw her introduction to the collection as a great endorsement.

Thankfully, I was not disappointed. Both the graphic novel and the new series are great. 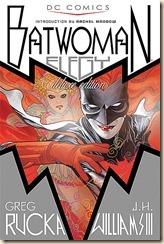 Batwoman battles a madwoman known only as Alice, inspired by Alice in Wonderland, who sees her life as a fairy tale and everyone around her as expendable! Batwoman must stop Alice from unleashing a toxic death cloud over all of Gotham City — but Alice has more up her sleeve than just poison, and Batwoman’s life will never ever be the same.

This graphic novel is filled with some of the most superb, atmospheric comic art I’ve ever seen – on a par with Bermejo’s in Batman: Noel. It is really very stunning. There are a number of things that also make the composition stand out from most other comics. Specifically, I like that the artists don’t use just the standard square or rectangular block-frames, and they’re far more innovative with the way pages are composed and put together. I also liked that there were two styles to the visuals – one for “present” day and Batwoman’s scenes, which was sharper, more modern and gothic; and a second “flashback” style that looked at Kate Kane’s past and evolution into Batwoman, which had a more vintage feel to it. Very nicely done.

The story’s great, as well. There’s a new leader of the Religion of Crime (which I first came across in the new All-Star Western series), and Batwoman has a history with this group. Specifically, the previous Madame stabbed her in the heart. She’s only just recovering, but getting right back on the crime-fighting horse. Like Batman and Batgirl, not to mention every other member of the Bat-family, Kate Kane is very driven and cavalier about her own safety; charging into dangerous situations, not thinking through all the options or potentials. That being said, she does spend almost as much time investigating as she does fighting.

I really enjoyed this book, and I’m very glad I took the time to pick this up before reading the New 52 series. It’s dark, atmospheric, chilling, slightly surreal, and beautifully rendered. It is, therefore, very highly recommended. I am a complete convert to Greg Ruckas’s writing and J.H. Williams III’s artwork.

To reference Rachel Maddow’s introduction again, I thought it was pretty good, too. In it, Maddow draws parallels between what Batwoman goes through and what gay and lesbian soldiers must experience under the “Don’t Ask Don’t Tell” policy of the US Army (which is why Kate Kane had to leave the army). I think it’s great that they were able to get someone like Maddow to write the introduction, as it draws a lot of good attention to the series and the issues discussed within.

I’m going to have to seek out the story (either in single issues or a collected edition) of the events before this. 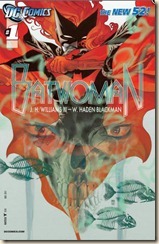 #1 – Batwoman faces deadly new challenges in her war against Gotham City’s underworld – and new trials in her personal life as Kate Kane. Who or what is stealing children from the barrio, and for what vile purpose? Will Kate train her cousin, Bette Kane (a.k.a. Flamebird), as her sidekick? How will she handle unsettling revelations about her father, Colonel Jacob Kane? And why is a certain government agency suddenly taking an interest in her?

#2 – A terrifying new villain stalks the innocent children of Gotham City. A threatening government agency is hot on Batwoman’s trail. Kate Kane’s new relationship is heating up. Can Batwoman stop the new evil rising from the damp back alleys of Gotham’s barrios? And overcome the many challenges she faces as both Batwoman and Kate Kane?

#3 – Batwoman faces the terrifying villain stalking Gotham City’s children. Can she defeat the gruesome monster in time to save the city’s most innocent victims? Kate Kane unearths a ghost she has tried hard to bury, even as the D.E.O. closes in on Batwoman. Can Kate outrun her past and Cameron Chase? Kate’s relationship with Detective Maggie Sawyer continues to evolve. But will Kate’s nocturnal activities cause a rift between the two? 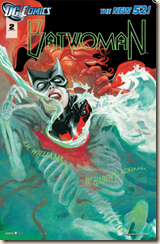 Again, as with Elegy, there is a different style for the Batwoman scenes and those featuring Kate Kane or others. It is, of course, superb, and complements the story perfectly. The story, to quote Batwoman herself, is much “creepier than expected”.

The first issue lays the groundwork and gets us up to speed on Batwoman and the case of the missing children. We get a very short and compressed double-page-spread that catches us up with the events of Elegy later in the issue, but it otherwise hits the ground running and picks up almost immediately where Elegy left off. There is, however, no explanation as to why Flamebird is training with Batwoman. Or, really, where she came from… Although, they are cousins, which was completely new to me.

In the second issue, Batwoman’s life gets even more complicated. She uses her budding relationship with Detective Sawyer to get information, and has to make sure she doesn’t tip off her new partner to her real identity. It’s a nice contrast to Batman’s voluntary, mutually-beneficial friendship with Commissioner Gordon and their approach to information-sharing. The were-beasts that appeared in Elegy are back, only this time as the victims of a slaughter (it’ll be interesting to know if they feature again later in the series). I must admit I found their appearance and inclusion in a Gotham title a little hard to swallow – they seemed a bit too “out there”, and can’t be explained away like many of the other more obscure Batman villains and Gotham denizens. But, given the horror-tilt of this title, I guess they fit fine. I’d really like to learn more about them and the Religion of Crime they follow (I find the idea fascinating and full of potential). 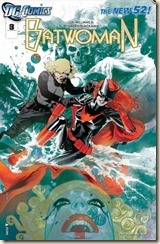 The third issue sees things ramping up again, as Kate’s experiences with Madame Alice from Elegy come back to haunt her, and she has a run-in with the Weeping Woman (the strange entity making off with lots of Gotham children). Cameron Chase, the investigator from the Department of Extranormal Activities is dogging her heals, taking orders from a very peculiar boss (another person who’s aspect was a little hard to accept). To top it all off, after an emotional confrontation with her cousin, Flamebird decides she’s had enough of Kate’s West Point-style training and abuse, and decides to go it alone. The final page suggests things won’t start well in issue four.

As suggested above, Batwoman is a title that leans more towards the horror-side of the genre. This is something I really enjoyed, as it gives the stories a more gothic feel, and makes them stand out a little bit from the other (admittedly already dark) Batman/Gotham titles. I’m not sure if it’s necessary to read Elegy before diving into the New 52 series, but I think any reader will find the graphic novel rewarding and also appreciate the additional character development and background. Batwoman is a fascinating character, and one whose adventures I’m going to keep following.

Williams’s artwork is superb, in both the graphic novel and the new series, and these were a pleasure to read. Easily in the top ten best of the New 52 titles.