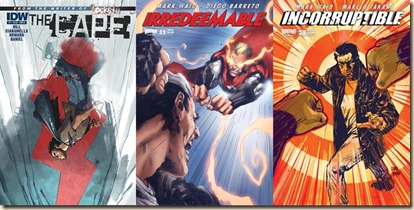 Despite the Christmas holidays, there are still a few comics released today to sate the voracious appetites of comic addicts. And they’re pretty good titles, too – some more of DC’s New 52 get their fourth issue, for example (I’ll be reviewing them when I get back to New York late January) and far more besides. Here’s just a small selection of the comics published today that I could get my hands on in time for a review. 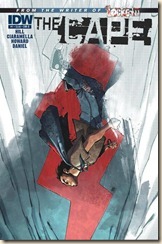 A line has been crossed. After years of failure, Eric has finally found something he’s good at, and is determined to let the world know. The follow-up to December’s critically acclaimed, quickly sold-out one-shot, this new miniseries is again written by Jason Ciaramella and Joe Hill, with art by Zach Howard and Nelson Daniel. Explore your dark side.

This comic is based on a short story of the same name written by Joe Hill (creator and writer of Locke & Key). This mini-series is, as the synopsis states, a follow-up to a one-shot comic released a while ago. Sadly, I’ve not read that, but this mini-series is pretty interesting and I don’t think it’s necessary to have read either the short story or the one-shot to enjoy and follow the story in here. I would, of course, now really like to read the other two, but for the moment I’ll just have to make do with this ongoing series (I’m not sure how many issues there will eventually be). 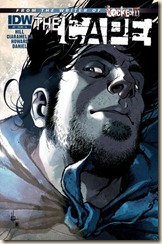 Eric has recently moved home after breaking up with his girlfriend, Angie. Who has just been found dead, suffering injuries reminiscent of suicide jumpers. When some cops come ’round to investigate him, we learn just how dark Eric’s mind is.

Eric is absolutely not a nice guy. He’s a fuck-up, really, full of resentment for his elder brother, Nick, who is the all-American success – Harvard graduate, now a doctor, that sort of thing – while Eric is still living at home with their mother. Something happened to him during his childhood, and Nick was involved. We don’t know all the details but each of these three issues gives us just a little more detail of what Eric and Nick were like as children. 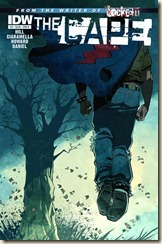 With a cape that gives him the ability to fly, Eric has the opportunity to make something of himself, to do good. After all, as the famous line goes, “with great power comes with great responsibility.” Eric, however, is going a different route. He doesn’t use his powers for good, but rather he indulges in selfish desires, and petty vengeance; he is a real, murderous asshole. And things only spiral more out of control as the issues progress and his psychosis escalates.

It’s an interesting comic. It’s a good examination of what happens when power falls into the wrong hands, and the extreme, worst side of resentment and inferiority complexes. The art is pretty great – clear yet gritty, with some sketch-like elements left in (rougher edges, for example), and a subdued and grungy colour palette. If you’re looking for something particularly dark, with an irredeemable protagonist, then I’d recommend this. 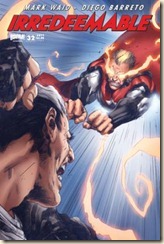 Witness a life-changing tale from when the Plutonian was the world’s most beloved superhero and Max Damage was one of the most savage super-villains anywhere!

The Plutonian and Max Damage have always been arch-enemies… but how did they get that way? Witness the birth of these super-powered nemeses in this flashback story across the pages of INCORRUPTIBLE and IRREDEEMABLE!

Don’t miss the origin of this famous set of super-enemies in this 4-issue crossover event. 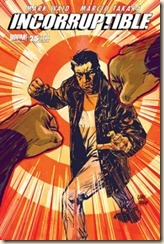 Last week, the first part of a four-issue mini-series was released. Coming in the standard timelines of Irredeemable and Incorrupible, the series shows us how the Plutonian and Max Damage became nemeses, and how their lives became interlinked so many years ago.

Despite coming well into the series’ respective publishing runs, these two issues (and the two that will follow) are a good point to jump in. I would say, however, that Incorruptible #25 is more accessible for newcomers. This is not to say that Irredeemable #32 is not accessible, but there was something about the issue that made me glad I’d already read a fair bit of it before, and so fully understood who was who, and what was going on. Both were very well written and brilliantly drawn and coloured – slightly different styles, but equally eye-catching, detailed and vivid.

Irredeemable #32 starts off with a very condensed catch-up, as a general reminisces about his memories and understanding of the Plutonian’s history and fall from grace. What follows is his origin story. It’s an interesting one, for sure, and a filled with more of the tragedy that has followed the Plutonian his entire life. There’s an almost Dickensian approach to the story, as if the Plutonian is receiving the visit from Christmas Past. A great addition to our understanding of the Plutonian’s early years, although by the end of the issue there was no clear evidence of how the two series will be tied together.

Incorruptible #25 opens with Max Damage as a kid, looking to trap or find the “Wolf Boy” – which is actually the urban myth that came about after the Plutonian fled home. After reading Irredeemable #32, we see how things tie together, and some events in that issue are revisited in this issue. It’s nicely done, and it’ll be interesting to see how the next two cross-over issues pull stuff together. I liked the narrative device used in this issue, too – Max’s letters over the years to a childhood friend.

Both of these titles continue to entertain and meet expectations. I have certainly become a convert to them both, and definitely will seek out anything Mark Waid writes.

Superb. I’d definitely recommend both Irredeemable and Incorruptible to anyone looking for intelligent, thought-provoking comics.

Both of these issues have also been released with face-off-style variant covers: 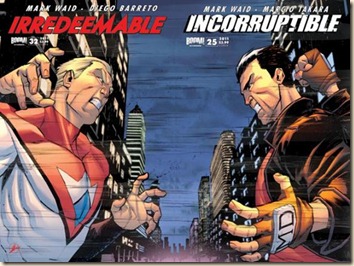