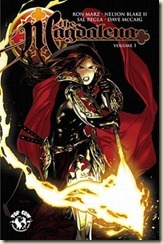 A Holy Warrior, the Anti-Christ and a corrupt Church

The Magdalena has been the official protector and warrior of the Catholic Church for over two thousand years, sworn to defend the Faith with the Spear of Destiny against all manner of supernatural threats.

However, Patience, the latest Magdalena, has seen through the hypocrisy of her masters and struck out on her own. When her old mentor comes to her with a mission to kill the Anti-Christ, will she be able to resist the call?

I knew nothing of this title when I saw it available on NetGalley, but it sounded interesting and appealed to my taste in supernatural thrillers and the like. It’s a pretty interesting and enjoyable graphic novel, well-written, with a strong protagonist and plenty of action.

Reading the description of the line of Magdalenas, I was put in mind of The Da Vinci Code meets Buffy the Vampire Slayer (as I discovered, the former is mentioned in Marz’s afterword). When you take the fact that the Magdalenas are descendants of Jesus and that once in every generation one is picked to serve as the protector and warrior against supernatural threats… Of course, that’s where the comparisons end, as this is quite a different type of story, and one I rather enjoyed. I’ve always been attracted to stories that play around with rich religious mythology (of any creed, but particularly Christian), and The Magdalena is no exception.

Patience’s rogue status has caused rifts in the Vatican, and moves have begun to replace her as the Magdalena. Approached by her old mentor, she resists the call to come to the Church’s (and the world’s) aid, until she is forced to reconsider when ambushed by a demon. Unable to work for the Church and the men she despises, she nonetheless believes in the cause to which she was born, and an uneasy truce is struck, as she joins with her mentor to confront the threat posed by the supposed risen Anti-Christ. This requires a globe-trotting hunt for the cult and their ward, taking us across some of the more gothic regions of Europe. All does not go well for Patience and Kristoff, as they face off against cultists and demons aplenty.

The artwork is very clean and clear. The characters are realistically drawn, in proportion, etc., and the detail remains high throughout – except for a few frames when they’re pared back and the attention is paid to the dynamism rather than particulars. It works, but I do think it would have been better to retain the detail throughout. There are quite a few striking half-, full- and double-page frames – from the Hall of the Magdalenas, Ukrainian castles, Notre Dame and the Paris Catacombs, it’s always eye-catching and oftentimes almost cinematic in scope.

One amusing thing I noticed was that a couple of the demonic minions of the Cult of the Children of Satan looked like the band Disturbed’s mascot – the cowled, manically grinning lunatic: 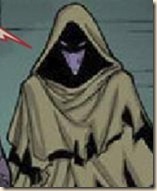 Considering this is “Volume #1”, it still felt like there was a lot that came before it. Thanks to Marz’s aforementioned afterword, it became clear that the Magdalena character has appeared before in the Witchblade and Darkness titles from Top Cow – both of which are high on my to-read priority list.* Nevertheless, this is an interesting, fun read and should appeal to anyone who likes their comics with a supernatural twist to the story.

A good, substantial read. It’s unclear to me where the story goes from here – I know there was more cross-over between Top Cow’s Witchblade and Darkness titles and this, but other than that, I couldn’t figure out if there’s more that comes after for Patience and Kristof.

Regardless of whether or not this is the end of the series, I would certainly recommend it.

* Volume One of Witchblade is available for the bargain price of $4.99, too, so it’s a perfect low-cost way to try out the setting. I picked it up before I left New York, and will read it early in the New Year. I have high hopes.