I know some other sites have featured these covers in the not-too-distant past, but I decided I was going to get over my damn-I’ve-been-scooped again issues, and share them anyway, because I think they’re damned great.

First, the new artwork for the three Michael J. Sullivan Riyria Revelations omnibus editions, which will be published by Orbit (on both sides of the pond):

Royce Melborn, a skilled thief, and his mercenary partner, Hadrian Blackwater, make a profitable living carrying out dangerous assignments for conspiring nobles – until they become the unwitting scapegoats in a plot to murder the king. Sentenced to death, they have only one way out... And so begins this epic tale of treachery and adventure, sword fighting and magic, myth and legend.

Michael was kind enough to send me an eARC of Theft of Swords, so I shall endeavour to get this reviewed before it’s available to the public. If you’re interested in finding out more about Michael and his series, visit his website and blog, and read his interview for CR, here. His blog also features an amusing comic strip he’s started, Plotholes, which takes a look at fantasy tropes (it’s quite funny, so I recommend you check it out).

Next up is another author I’ve not read yet, but have heard very good things around the internet and also from a couple of authors: Saladin Ahmed (in fact, I think I first came across his name through Aidan at A Dribble of Ink and in the interview Kevin J. Anderson did for CR, but also via Doug Hulick and Blake Charlton). Saladin’s debut novel, Throne of the Crescent Moon will be published by DAW books in the US in February 2012. 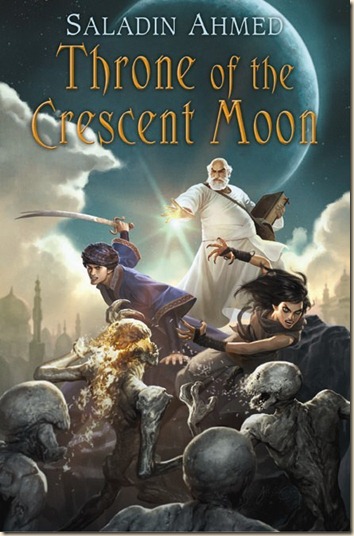 I think this looks awesome. Here’s the (rather long) synopsis:

The Crescent Moon Kingdoms, land of djenn and ghuls, holy warriors and heretics, Khalifs and killers, is at the boiling point of a power struggle between the iron-fisted Khalif and the mysterious master thief known as the Falcon Prince. In the midst of this brewing rebellion a series of brutal supernatural murders strikes at the heart of the Kingdoms.

Doctor Adoulla Makhslood, the last real ghul hunter in the great city of Dhamsawaat, just wants a quiet cup of tea. A fat old man who has grown weary of hunting monsters and saving lives, he’s more than ready to retire from his dangerous vocation. But when an old flame’s family is murdered, Adoulla is drawn back to the hunter’s path.

Adoulla’s young assistant Raseed, a hidebound holy warrior whose prowess is matched only by his piety, is eager to deliver God’s justice. But even as Raseed’s sword is tested by ghuls and manjackals, his soul is tested when he and Adoulla cross paths with the tribeswoman Zamia.

Zamia Badawi, Protector of the Band, has been gifted with the power of the Lion-Shape, but shunned by her people for daring to take up a man’s title. She lives only to avenge her father’s death. Until she learns that Adoulla and his allies also hunt her father’s killer. Until she meets Raseed.

When they learn that the murders and the Falcon Prince’s brewing revolution are connected, the companions must race against time – and struggle against their own misgivings – to save the life of a vicious despot. In so doing they discover a plot for the Throne of the Crescent Moon that threatens to turn Dhamsawaat, and the world itself, into a blood-soaked ruin.

So, that’s it for this instalment of book-eye-candy. I’ll keep posting interesting artwork as-and-when I come across it. Hopefully one day I’ll manage to do it before other people, too…

Posted by Civilian Reader at 6:13 PM