“The Book of Transformations” by Mark Charan Newton (Tor) 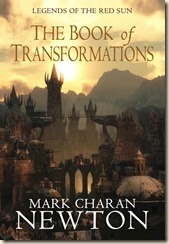 The Legends of the Red Sun return to Villjamur

A new and corrupt Emperor seeks to rebuild the ancient structures of Villjamur to give the people of the city hope in the face of great upheaval and an oppressing ice age. But when a stranger called Shalev arrives, empowering a militant underground movement, crime and terror become rampant.

The Inquisition is always one step behind, and military resources are limited. So Emperor Urtica calls upon cultists to help construct a group to eliminate those involved with the uprising, and calm the populace. But there’s more to The Villjamur Knights than just phenomenal skills and abilities – each has a secret that, if exposed, could destroy everything they represent.

Investigator Fulcrom of the Villjamur Inquisition is given the unenviable task of managing the Knights, but his own skills are tested when a mysterious priest, who has travelled from beyond the fringes of the Empire, seeks his help. The priest’s existence threatens the church, and his quest promises to unweave the fabric of the world. And in a distant corner of the Empire, the enigmatic cultist Dartun Súr steps back into this world, having witnessed horrors beyond his imagination. Broken, altered, he and the remnants of his cultist order are heading back to Villjamur. And all eyes turn to the Sanctuary City, for Villjamur’s ancient legends are about to be shattered...

In the third novel of his Legends of the Red Sun series, Mark Newton takes the reader back to Villjamur, and gives us an atmospheric, thought-provoking fantasy to sink our teeth into. Superb continuation of the series, which shows Newton continues to grow and improve as an author.

It’s quite difficult to go into too much detail of the plot, as throughout the novel there are revelations and surprises that will change how we see certain characters and events. That being said, I will say a little bit about Lan, the central figure of the novel, and some of the characters closest to her. Lan is transgender – she is a woman born in a man’s body – who through a chance meeting with a cultist is given the opportunity to be transformed fully into a woman. Due to the success of this procedure, however, she is targeted to be forcibly inducted into the Villjamur Knights (her body having already proven malleable by cultist methods). The other two Knights (there are only three of them) are very different – Vuldon, a former hero to the people who is living in disgrace after being set up to take the blame for an accident; and Tane, a young playboy spending his inheritance through shame of how his family made their fortunes. Inquisitor Fulcrom is ordered by Emperor Urtica to blackmail the three candidates into joining the Knights and undergoing the augmentations that will make them more than human. At first, the Knights do a good job of helping the helpless, but soon long-simmering resentments and conspiracies erupt, and events move beyond even their ability to help.

I felt the plot of Book of Transformations did not move at quite the same clip as City of Ruins, but was closer to the first in the series. This may, in fact, be a reflection of the setting – Villjamur is very interesting and atmospheric, and the city is practically a character in its own right, demanding its own share of the narrative. It’s a great setting, actually, and Newton does a wonderful job of guiding us through some of it, showing us its quirks, difficulties, and its many denizens. The situation in Villjamur is rapidly deteriorating, as the Emperor’s harsh policies increase the divide between the starving, down-trodden poor and the wealthy and elite, who continue to attend balls and enjoy many comforts despite a protracted war and increasingly harsh climate. One nice thing, I felt, was that it was difficult to choose sides in this fight – the Emperor is undoubtedly corrupt, but the Knights (his creation) are a force for good. Those who live in Caveside and wish to overthrow the regime are just, but their methods are brutal (almost gleefully so, later in the novel) and reprehensible.

The first half of the novel sets things up nicely, introducing us to the characters and the formation of the Knights, including their familiarisation with their new powers, while also giving us hints of what else is to come as the novel progresses. The second half of the novel ups the pace and action, and I found myself staying up well into the night on two occasions (I finished the novel at 4am) as everything came together rather well into a very satisfying conclusion.

The side-plots that slowly merge with that of the Knights’ are interesting and intriguing. I wasn’t really sure where the Dartun Sur story was going at first, and it sometimes drew a little momentum away, but as I spent more time with them and the changes wrought on Dartun become more apparent, my interest was well and truly piqued. Ulryk, the heretic priest was a good character, too, and his journal excerpts were good inclusions, offering up an alternate perspective on events as they unfolded, as well as more information on the world and religions that may not have worked as dialogue. I was, however, quite surprised at how seemingly easily Inquisitor Fulcrom offered him support and help. Their trips into the libraries and underworld of Villjamur were pretty great, though, and offered for some pretty weird developments (and showcase Newton’s fondness for blending fantasy with some traditionally science-fiction elements).

One of Newton’s greatest strengths as an author is his ability to write realistic and sympathetic characters. Despite this being quite the eventful novel, I thought it was, at heart, primarily character-driven, and images of his characters are what have stayed with me the most. Almost all of them have quirks of one type or another, which makes each one feel even more rounded and complete. These quirks tend to take the form of secrets of one type or another – take, for example, Commander Brynd of the Night Guard, the hero of Nights of Villjamur and City of Ruin – an albino captain of the guard, forced to hide the fact that he’s a homosexual because it’s a capital crime in the Empire. (I’ve seen some people write that he overdoes ‘issues’ in his characters, but I disagree.) Even peripheral characters appear fully-formed as we meet them (such as the anarchist Caley, or the mysterious inspiration behind the revolt, Shalev).

The choice of a transgender as the main protagonist could have gone awry, but I think Newton has written her character, her difficulties, and her interactions with others (colleagues, strangers, enemies) very well indeed, and with a delicacy that was both welcome and surprising. Often, when one finds characters such as this, a preachy or strident tone can come across (at other, saddening times, more negative tones are evident), but not once did it feel like the author was trying to push an agenda. It’s very much a case of the main character happens to be transgender, and Mark does a great job of highlighting a lot of the problems that face transgenders in the world today, only transferred on a more repressive and less enlightened fantasy setting. If I’m perfectly honest, however, I never thought of Lan as anything other than female, which I think is a sign of Newton’s success at writing her character.

Inquisitor Fulcrom is a fastidious cop, and utterly dedicated to his job and the mission of protecting the city’s population. Tane embraces his new role with the same gusto he used to embrace partying and spending money, developing a sense of duty that is admirable, while retaining a cheeky playfulness that was very endearing. Vuldon, the aged hero looking for redemption becomes something of a father figure to the other two Knights, and a bond certainly is formed between them all. Emperor Urtica displayed quite the impressive degeneration over the course of the novel, as events start to become too much for him to handle – his comportment, orders and probably sanity slowly slipping, as he cracks under the pressure.

Overall, this is a superb addition to the series, and I can’t wait to read the final volume when it comes out. Newton continues to improve with each new novel, and his talent for writing atmospheric plots peopled by interesting, fully-realised and often sympathetic characters is near-unrivalled. This is not your standard fantasy novel, but this series is certainly one of the most satisfying I’ve ever read. I’ll be very sad when it’s over.

Posted by Civilian Reader at 11:40 AM