“Songs of the Earth” by Elspeth Cooper (Gollancz) 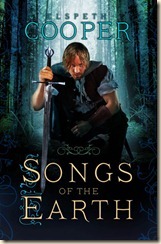 A tantalising opening to the Wild Hunt series

Elspeth Cooper’s debut novel has been slowly garnering attention on the blogosphere, and ever since I saw it mention by GavReads, I’ve been interested in giving it a try (I was quite pleased that I won it in one of the GenreForJapan auctions). The novel, while flawed in a couple of small ways, is a tantalising opener to the series, filled with interesting and engaging characters and a plot that promises great things in the future.

Songs of the Earth is in many ways the story of Gair’s journey to discover himself, his powers and their limits, and his place in the world now that he has been cut off from everything he has ever known. After the sinister opening chapter of Gair’s sentencing, a kindly old man, Alderan, nurses Gair back to a semblance of health, and helps him escape the wrath of the Church. A bond is formed during their journey to the Guardians of the Veil’s Chapterhouse, where Gair will learn to harness the power of the Song, and maybe find a place among the Guardians.

The school-setting will be familiar to many fans of fantasy, as it is becoming an ever-more-popular narrative device. Unusually, however, while nicely constructed, the author doesn’t really give us much in the way of details of its daily working and the classes Gair and his fellow adepts attend (which was a pity, as I rather like this plot-device). It does not, for example, feel as central to the story as the University in Patrick Rothfuss’s Name of the Wind. The magic system Cooper has created is also pretty innovative – if you imagine the Force being a music that underpins the world, you’re sort of there – and it’ll be interesting to see how the characters’ and readers’ understanding of it develops over the series.

The novel builds to a great, big battle at the end, as the hidden enemy Alderan has been concerned about makes a first play for the knowledge kept at the Chapterhouse. It’s a pretty cool sequence, and offers some more elements to the world and story. That Gair did not save the day solely using magic was a fine touch (given the importance of magic to the story, and his prodigious gift for it), although when he does resort to magic the effect is explosive. Not everyone comes away from this battle unscathed, and I was quite upset at one result of the conflict.

Cooper’s characters are interesting and engaging, for the most part. Our hero, Gair, actually bothered me a little towards the beginning: he just didn’t seem tough enough. He’s a trained swordsman, but he “doesn’t like hurting people”, including those who are trying to kill him... Thankfully, by the end of the novel, Gair has embraced his powers and abilities, and we can see the type of hero he may become (although, there are hints that he may develop quite a dark-side in the next novel, too). The rest of the characters are very well drawn and feel fully-formed from the get-go: Alderan, the head of the Guardians of the Veil, is likable immediately, as is Gair’s first friend at the Chapterhouse, Darin – who, unusually for fantasy, has diabetes. Aysha, a slightly disabled Master of the Guardians offers an interesting and fiery alternative to typical female characters, and it’s quite fun to read her play around with Gair’s rather prudish nature (a side-effect of ten years of Church-provided training). Even the Church elders – the ‘bad guys’ of the piece – are not without their endearing members. The preceptor is refreshingly down-to-earth, as are a couple of his close allies. It will certainly be interesting to see how events in the Church develop and effect Gair’s own story.

Cooper’s writing is very good, and her prose is fluid, managing to evoke atmosphere and location without much description (I thought this was particularly good). The dialogue in the novel never feels contrived or forced, and there are some good snippets that raised a smile or a chuckle. The spare exposition and description was a boon at the beginning, allowing the reader to hit the ground running, but as the story progressed it would have been nice to start getting more of the world and its history fleshed out. That being said, without delving too deeply, there are some tantalising mysteries that are only slowly revealed or left unravelled at the end of the novel, so there’s still plenty of discovery left in upcoming novels.

Given the scope of the novel and the characters, I though this could have done with being at least 50 pages longer, spread out over the course of the novel. This would have allowed us to get to know more about Gair, his companions, the Chapterhouse and its inhabitants, and also Church politics (which come to a head near the very end of the novel). There’s a moment quite late in the novel when Gair confronts Alderan, accusing him of holding back information about the dangers that face the Guardians, and I shared some of his frustration at not knowing more of the picture, or of the events in motion. That I felt dissatisfied with the length of the novel should not be seen as a condemnation of Cooper’s writing or story. Rather, it is part of the power of the author’s creation – the world is rich and vivid, but quite sparsely described. There’s so much scope for exploration – be it the ‘present’ or the world’s past – and I really hope the author feels more comfortable to expand her creation next time around.

Overall, I would say Songs of the Earth is a tantalising opening salvo in a promising new fantasy series. My issues with the lack of exposition aside (what a rare concern to have with a debut fantasy…), this is a fast-paced and tightly written novel that shows considerable skill and promise for the future. Cooper has created a wonderful setting, certainly with scope for more novels beyond this first trilogy, and in Gair, Alderan, Savin and many others, we have a cast of characters that will keep us reading for many books to come (or, at the very least, two more).

The novel wasn’t perfect (although I seem to be the only person who thought Gair needed toughening up), but there is a lot of great content – characters, prose, story – that should please any fan of fantasy. Anyone who reads Songs of the Earth should come away eager to read more about Cooper's world and characters. Which, ultimately, is exactly what one wants from an opening novel in a series.