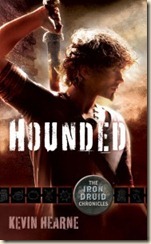 Atticus O’Sullivan, last of the Druids, lives peacefully in Arizona, running an occult bookshop and shape-shifting in his spare time to hunt with his Irish wolfhound. His neighbours and customers think that this handsome, tattooed Irish dude is about twenty-one years old – when in actuality, he’s twenty-one centuries old. Not to mention: he draws his power from the earth, possesses a sharp wit, and wields an even sharper magical sword known as Fragarach, the Answerer.

Unfortunately, a very angry Celtic god wants that sword, and he’d hounded Atticus for centuries. Now the determined deity has tracked him down, and Atticus will need all his power – plus the help of a seductive goddess of death, his vampire and werewolf team of attorneys, a sexy bartender possessed of a Hindu witch, and some good old-fashioned luck of the Irish – to kick some Celtic arse and deliver himself from evil.

Kevin Hearne’s series has been receiving quite a bit of buzz on the internet, so I decided to order a copy of this first novel in the Iron Druid Chronicles. Just as it arrived, Orbit Books announced that it had bought the UK rights. So, does it live up to the hype? Well, yes, actually, it really does.

Long-time readers of the site might have noticed how little Urban Fantasy I review. This is because I seem to have an abiding apathy toward the sub-genre. Even Dresden Files hasn’t fired my interest in any particular way. So, I turned to Kevin Hearne’s Iron Druid Chronicles to find out if maybe this could be the series to open up the sub-genre as a whole for me. Interestingly, I think it sort-of has.

Hounded is about Atticus’s attempts to protect the sword from falling into the hands of Aenghus Og – the Celtic god who has hounded Atticus for centuries. As Aenghus manipulates those around Atticus in search of the sword, events spiral quickly out of control, so contemptuous is Aenghus of the mortal plane and its inhabitants. This contempt puts extra strain on Atticus’s attempts to blend in to modern American society – not easy at the best of times, when you’re perhaps the oldest human on the planet. With some help from unexpected sources, along with his devoted wolfhound Oberon, Atticus slowly discovers what the greater conflict is about, and realises that things will get a whole lot more difficult before he’s safe once again.

I was initially a little wary when it seemed that the Fae were going to play a large part in the novel. I’ve never been particularly interested in them as characters or nemeses in novels (even Jim Butcher’s aren’t particularly interesting, in my mind). However, it quickly became apparent that they were only a small cog in the mythological wheel that Hearne has drawn from for his novel, and the gods are far more important. This suited me perfectly, and I loved how they were woven into the plot and back-story. The Celtic gods are not overly familiar with Arizona (or the mortal realm as a whole), which requires Atticus to sometimes play the part of guide, which can sometimes feel surreal (such as the time he has tea with a goddess). We also learn a good deal about Atticus’s magic, but only snippets of his backstory – something I assume (and hope) will be revealed over the course of the series.

Hearne’s writing is tight and well-crafted, and for the most part you will just whip through it. However, there were a few times that felt like Hearne spent a little too much time explaining and re-explaining certain things (why Atticus is OCD about cleaning up his blood, for example, or why he takes off his sandals to connect with the earth). It’s not a very long novel, and I can’t imagine anyone being able to put this aside long enough to forget these things, so it seemed a little odd that Hearne repeated certain things so often in the first few chapters. In certain respects, Hounded has the feel of a debut, with a fair amount of (necessary) scene-setting; but at the same time, Hearne’s characters, prose and the pacing are very assured. At times, it’s hard to believe this is a first novel.

Hearne’s greatest strength is his skill at characterisation. Each of the heroes and villains in Hounded feels fully-formed and engaging. Atticus is awesome, and Oberon is a great companion. Atticus is a very common-sense hero, and not one that’s above doing what’s necessary. He does not have the modern man’s squeamishness to cold displays of necessary violence, but he has acquired a wealth of pop-culture references that he deploys with relish and great timing (the comments about Field of Dreams on p.65 were great). There were many lines and passages that led me to alternately laugh, chuckle, smirk or at least smile. Hearne has a great sense of humour.

Peripheral characters are also well-rounded and realistic – including the widow MacDonagh, Atticus’s shop-assistant Perry, his werewolf and vampire attorneys, and also the Morrigan. With snappy dialogue and plenty of witty banter, it’s impossible to dislike any of these characters, and next to impossible to put the book down. Even though we know Atticus will save the day, we still become invested in his and others’ plight as Aenghus gives every indication of being willing to deploy any and all means necessary to take back Fragarach from the druid.

Even if, like me, you’re usually wary of Urban Fantasy, I would strongly recommend this series just for the characters. I loved them, and I will definitely be reading the rest of this series. Indeed, on the strength of Hounded, I shall definitely be checking out anything else Hearne writes, probably ever.

This novel is entertaining, steeped in a ton of mythology, populated by awesome characters, and feels fresh and original. Best of all, I think it doesn’t take itself too seriously, which only made it all the more enjoyable. After I got over my initial reservations (I am eating humble pie, I promise), I thoroughly enjoyed this. Urban fantasy at its best.

Hounded and Hexed are available now in the US, with Hammered coming in July. Hounded will be published in the UK through Orbit Books in September 2011, with Hexed and Hammered following in October and November 2011, respectively.

Posted by Civilian Reader at 1:18 PM