Some great Monday news for UK readers: Orbit have acquired the UK publishing rights for Kevin Hearne’s Iron Druid series. The three novels – Hounded, Hexed, and Hammered – have been the subject of growing internet buzz, and from what I’ve heard and read about the series, it is rather good. 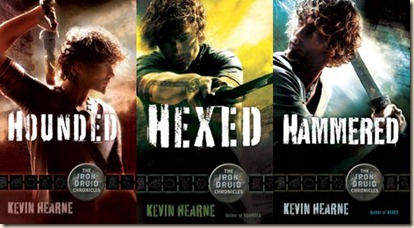 According to the press release, Orbit is hoping to publish the novels this year, in consecutive months – September, October and November (Orbit seems particularly fond of this strategy, and I’m sure readers are equally fond of it).

“I first read the manuscript for HOUNDED in 2009 but it was before I moved to Orbit, and although I loved the story, I couldn’t see a way to make it work on my list back then (I was mainly publishing crime thrillers). When I heard the Iron Druid series was still looking for a UK home I couldn’t believe my luck, and I’m delighted to be bringing Atticus to the UK after all.”

Hearne himself said he is “thrilled to be with Orbit UK”. He adds,

“The rich mythology of the Irish is endlessly fascinating to me, and an allusion to British lore in Hounded will eventually become important later in the series as Atticus finds himself in trouble near Windsor Castle.”

I recently ordered a US copy of Hounded, so I shall try to get it read and reviewed for next week, hot on the heels of this news. I’ve heard some pretty good things, actually, and many people have been pointing out that not only is it good fantasy, but it’s also funny and Atticus O’Sullivan is a great character.

Here’s the synopsis for the first novel:

Atticus O’Sullivan has been running for two thousand years and he’s a bit tired of it. After he stole a magical sword from the Tuatha Dé Danann (those who became the Sidhe or the Fae) in a first century battle, some of them were furious and gave chase, and some were secretly amused that a Druid had the cheek to defy them. As the centuries passed and Atticus remained an annoyingly long-lived fugitive, those who were furious only grew more so, while others began to aid him in secret.

Now he’s living in Tempe, Arizona, the very last of the Druids, far from where the Fae can easily find him. It’s a place where many paranormals have decided to hide from the troubles of the Old World — from an Icelandic vampire holding a grudge against Thor to a coven of Polish witches who ran from the German Blitzkrieg.

Unfortunately, the very angry Celtic god who wants that sword has tracked him down, and Atticus will need all his power, plus the help of a seductive goddess of death, a sexy bartender possessed by a Hindu witch, and some good, old-fashioned luck of the Irish to kick some arse and deliver himself from evil.

Hounded and Hexed are already available in the US, with Hammered to be published on July 5th. Hearne’s novels are published in the US by Del Rey.

To learn more about the series and the author, visit his website (which has links for a good-sized free sample from Hounded) and you can also follow him on twitter.

Posted by Civilian Reader at 2:23 PM