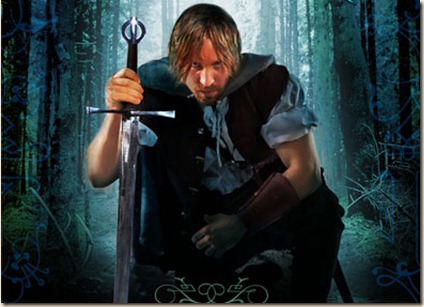 Hailing from the North of England, Elspeth Cooper is one of the latest crop of hotly-tipped debut fantasy authors of recent years. Songs of the Earth, the first in the Wild Hunt trilogy, is filled with intriguing magic and interesting characters, and is set in a rich fantasy world (one I believe has considerable potential for expansion way beyond this trilogy). The novel introduces us to Gair, an exiled and persecuted magical-wunderkind, as he attempts to find his place in a world that abhors everything he is.

As Songs of the Earth is newly released, I contacted Elspeth for an interview, and she was kind enough to reply and offer more information about the series, what’s to come, and (among other things) why the fantasy genre is like ice cream.

Your debut, Songs of the Earth is now available in stores (at least in the UK). What can readers expect from this novel, and how would you introduce your series to a new reader?

I hope they can expect to be royally entertained. It’s not an “issue” novel; it’s an adventure, so there’s a lively pace, plenty of action, a complement of interesting characters, a bit of magic. Fun, in other words. We’re still allowed to have fun in fantasy, aren’t we? Or did I miss a memo?

What can we expect from future instalments of the series?

Book 2 of The Wild Hunt, Trinity Moon, is a good bit darker. I’ve made no secret of the fact that this is one story in three acts, not three self-contained episodes with a common cast, so it should feel like momentum is building towards the finale. More is revealed of the game at hand, and of the land and the people playing it out. Secondary characters from Book 1 get bigger roles, foreshadowing starts to pay off, layers get peeled back.

The magic system in your series is pretty interesting, based on a musical force that runs through everything (did I understand this right?). Where did the idea come from, and did you have any difficulties devising the system?

Yes, you understood it right!

Where it came from is a moment of sheer whimsy: I was standing in the garden one summer morning, and it was too early for anyone to be up or cars to be driving past. The only sound was the waterfall into the pond, a few birds, and it was so still that I thought to myself “I can almost hear the plants growing”. That was the Song, right there.

The more I thought about it, the more it seemed to me that the Song needed different strands for each thing/creature/element, like different instruments making up the sound of an orchestra. Mountains, for instance, would have a different music to a bird, and water would sound different to air. Logically, it followed that different people would have different degrees of ability. They’d also have different specialities: some are like heptathletes and can master multiple disciplines, others can’t. Alderan, for instance, freely admits that he’s rubbish at Healing, but very good at shields; Tanith is an ace Healer, but hasn’t really developed her gift beyond medicine.

The main difficulty I found was that I have all the musical aptitude of a three-day-old bread bun, so whilst my ear hears all this beautiful music, I don’t have the vocabulary to describe it in musical terms – I can manage an arpeggio, with maybe a counterpoint on a good day, but mostly I have to use the language of colour and emotion to try to convey it to the reader. 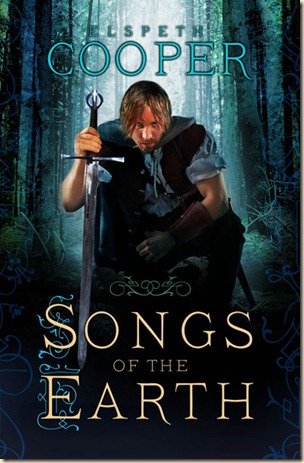 I’ve been into myths and legends since I was a kid – my favourite stories were about King Arthur and the Knights of the Round Table, and the twelve labours of Hercules. Greek mythology, Norse, Celtic; I lapped it all up. I don’t consciously borrow from the myths, but there’s hints and flavours that creep into the narrative. The title of the series, for instance, and in Book 2, the Nimrothi goddess of death has more than a hint of the Morrigan about her.

Biggest influences? Don’t laugh, but Wishbone Ash’s album Argus has a hell of a lot to do with why I write sword and sorcery – probably because I listened to it at a formative age! Tad Williams and Guy Gavriel Kay are right up there on my author-crush list, along with Alan Garner and Susan Cooper who enriched my childhood, and the late Robert Holdstock for his scholarship and effortless storytelling.

Writing is my day-job, now – I had to give up a 21-year career in IT when my deteriorating health came up hard against four hours a day commuting, and my health had to come first on account of you only get one of them. Serendipitously, Gollancz offered me a publishing contract round about the same time, so I shifted careers pretty much seamlessly.

My working day has settled into a bit of a routine: mornings are admin, emails, social media; afternoons are writing. I don’t have a set target of x-words-per-day: I just keep going until I feel I’ve accomplished something. That might be 200 words to finish a tricky scene that I’ve been gnawing at for days, or a whole chapter’s worth of new material. I’m a very organic, free-range sort of writer, and highly-structured, meticulously-planned writing does not come naturally to me at all.

I think I always knew I’d end up doing something with words. I was about 14 or so when I first made a foray into novel-length fiction. I still have those 260-odd closely-typed pages somewhere, filed away, never to see the light of day again. It’s atrocious, but I never throw writing away in case there’s a fragment of gold in there that might be useful someday. I have terrible pack-rat tendencies. I also still have a copy of the short story that won a writing competition when I was 15, that led to my friendship with Douglas Reeman, a.k.a Alexander Kent, whose quote adorns the back cover of my book. 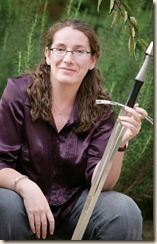 What’s your opinion of the genre (and community) today, and where do you see your work fitting into it?

I’ve always thought of fantasy as a broad church, willing to accommodate a host of different styles, from the sunshiny fluff to the relentlessly grim and bloody “bankrupt nihilism” end of the spectrum. I think The Wild Hunt sits somewhere in the middle. It borrows a few tropes from traditional epic fantasy, but I’m not consciously trying to  subvert them, or invent something that’s new for the sake of it. Songs of the Earth is what it is: a story that spoke to me, so I wrote it down. It’s not trying to be anything more than entertainment.

I’ve taken some flak for not being very original, but really, the human race has been telling itself stories for umpteen thousand years; is there really anything truly new to say? You can distil pretty much any book down to one of a handful of story archetypes – tragedy, rebirth, a journey and so on – so the craft is in the telling, and so far, no-one’s said I can’t tell a story [cue flood of comments on Stefan’s blog saying just that].

As for the community, the fellow writers I’ve interacted with have been universally welcoming and generous of spirit, though I’ve yet to learn whether they’ll stand their round at the bar. The people who write about writing, the bloggers and readers who haunt the message boards, have been variously supportive, cynical, enthusiastic, dismissive, just like any mixed crowd would be. People have to make up their own minds about me and my books. They won’t be to everyone’s taste, but that’s fine. There is a reason why ice-cream comes in more flavours than just vanilla.

Do you have any projects outside of The Wild Hunt in the pipeline? Given the potential scope of the Wild Hunt setting, do you think you might revisit the world after the trilogy?

My next book will almost certainly be set in the milieu of The Wild Hunt, although it will be a little different in flavour. I fell in love with the White Havens, a city that’s almost a character in itself, and plans are afoot for a darkly-humorous romp about a gentleman assassin who takes on a job that puts him completely out of his depth: imagine a cross between Richard Sharpe and Raffles, the gentleman thief, let loose in a city that’s part Regency London, part Venice at the time of the Borgias.

I’ve just finished Thea Atkinson’s The Secret Language of Crows on my Kindle, and I have a to-be-read pile that’s about the size of a Glasgow tenement, including Joe Abercrombie’s The Heroes, Mark Lawrence’s Prince of Thorns, Stina Leicht’s Of Blood and Honey, Doug Hulick’s Among Thieves and Bradley Beaulieu’s Winds of Kalakhovo. I also need to catch up with Pierre Pevel, Scott Lynch, and several others including the entire Song of Ice and Fire series to date.

I don’t read much non-fiction, but I do have Judith Herron’s Byzantium lined up for the day I discover multiple fractal universes in which I can read eighty four separate books simultaneously and still finish The Wild Hunt on time. Whimper.

It took me 20 years to believe I was a good enough writer to make a serious attempt at publication.

What are you most looking forward to over the next 12 months?

Getting my hands on the US edition of Songs of the Earth next spring, so I can have the full set of all seven editions on the shelf in my office, and say “I wrote that!”

Songs of the Earth is out now in all good UK book stores, and should be appearing in France, Germany, Holland, Spain, Portugal and the US very soon as well. 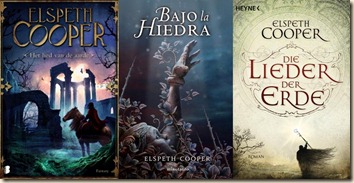 In addition, if you are in London this Thursday (23rd June), then pop into Forbidden Planet to meet Elspeth and a host of other Gollancz authors – more information on that can be found here, and on the author’s website.

Posted by Civilian Reader at 12:54 PM