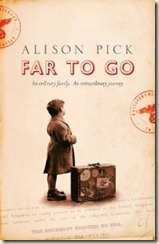 A compelling and thought-provoking novel

The story of one family’s epic journey to flee the Nazi occupation of their homeland in 1939, and above all to save the life of a six-year-old boy.

Pavel and Anneliese Bauer are affluent, secular Jews, whose lives are turned upside down by the arrival of the German forces in Czechoslovakia. Desperate to avoid deportation, the Bauers flee to Prague with their six-year-old son, Pepik, and his beloved nanny, Marta. When the family try to flee without her to Paris, Marta betrays them to her Nazi boyfriend. But it is through Marta’s determination that Pepik secures a place on a Kindertransport, though he never sees his parents or Marta again.

Far to Go is inspired by the author’s own grandparents who fled their native Czechoslovakia for Canada during the Second World War.

In Far to Go, Pick has created a complex and compelling work. The novel alternates between the historical narrative following the Bauer family, and the frame of a present-day first person narrator grappling (personally and academically) with the legacy of the Kindertransports. At first, the relationship between these two narratives is not apparent, but as the novel progresses, we begin to see more and more clearly how they are connected. While the historical portions are stronger than the frame narrative, Far to Go is nonetheless an impressive novel.

The Bauers’ story is not an uncommon one in Holocaust literature, but is no less wrenching for being familiar. They are secular Czech Jews completely unprepared for the spread of Hitler’s army and ideology, loyal to a nation that all too easily abandons them, and struggling to the point of denial to maintain a kind of normalcy. The novel is suspenseful, but it is no thriller – rather than momentous and dramatic events, we see a succession of small occurrences that lead inexorably towards the painful, tragic conclusion.

While the novel does in essence follow the back cover synopsis (above), the description does not emphasize a crucial aspect of the narrative: that it emerges through Marta’s perspective. This is an intimate portrait of the Bauer family, but it is offered by an outsider, and so contains within it a vision of their undoing. Marta feels genuine affection for her employers, but is also insecure and impressionable. She is repeatedly, in ways large and small, complicit in the Bauers’ fate, not because she is in any way evil, but because she is horribly weak, prone to the envy, resentment, and fear. Her perspective is frequently chilling.

Contemporary literature about the Holocaust frequently focuses on the physical artefacts that survived it: the few objects that remain of the multitude of lost lives and possessions become imbued with significance, such that a single object comes to represent the whole personality and history of its owner. In Pick’s narrative, the material detail of the Bauer’s world is vividly realised, with certain objects (such as Anneliese’s sapphire necklace and diamond watch) becoming pre-emptively infused with the significance of such artefacts.

The contemporary framing narrative is more meditative, slowly teasing out the connections between the unnamed narrator, the mysterious “you” she addresses, and the characters of the history. While Pepik’s separation from his parents occurs quite late in the historical narrative, the trauma of the Kindertransport echoes through these portions of the novel. There is a lyrical, occasionally surreal quality to the contemporary narrative, heightened by its contrast with the detail of Marta and the Bauers’ story. Pick retains a superb control of her narration as she moves between the two. Throughout the novel, her language and imagery are precise, with nary an unnecessary word; the writing is spare but evocative.

For me, the most striking aspects of the novel were contained within the historical narrative. Through her use of Marta’s perspective, Pick taps into a central ethical question concerning the Holocaust: the blurry line between perpetrators and bystanders. It is the problem of Judgement at Nuremburg rendered on the scale of Atonement: emotions and reactions that in any other context might seem natural and human become monstrous. While the narrative is also concerned with the complex relationships that make up this family, for me the issues of complicity and culpability stood out the most. Perhaps for that reason, I found the framing narrative less compelling than the rest of the novel. Its focus purely on the desire for family and belonging, responses to the guilt and abandonment experienced by survivors of the Kindertransport, seemed to limit the novel’s scope. While this did not undermine the intricacy and complexity of the historical portions, I did find myself occasionally frustrated that my attention was being directed away from what I found most interesting.

Far to Go is a tautly-written and thought-provoking novel. Pick only falters when she underestimates the breadth and power of her narrative.

Posted by Civilian Reader at 4:31 PM