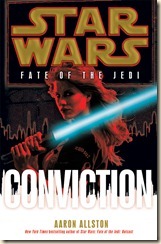 The Fate of the Jedi series continues, takes things up a notch

As this is book seven in the series, I’ve structured the review a little differently. There are some spoilers, below, so if you haven’t read the first six books in the series and don’t want any surprises, you may want to proceed cautiously.

Allston has written a solid addition to the series and franchise (the second half was particularly great, after a bit of a slow start), and Conviction starts the final three-book mini-story-arc within the series quite well. The nine-book approach is still not my favourite format, but Fate of the Jedi continues to offer up enough action, amusement and great Star Wars fun to keep fans coming back for more.

While Luke and Ben Skywalker continue their exploration of the mystery known as Abeloth with their unlikely Sith ally, the galaxy is abuzz with the trial of former Jedi knight Tahiri Veila. The moment when the fate of the Jedi will be determined is close at hand, as the exiled Grand Master works to find a reason behind the madness afflicting the Jedi. In the meantime, the remaining members of the Jedi Order struggle against the verdict already reached in the court of public opinion, and execute an audacious plan to put a stop to Chief of State Daala’s increasingly hostile and tyrannical regime.

I want to address the synopsis for a moment: Tahiri Veila’s court case, and the apparent verdict of public opinion are not sufficiently portrayed in the novel. Maybe it’s because there’s so much more going on in the novel, but it really didn’t feel like they were central to this volume (or previous ones, actually). Far more important were the Jedi actions on Coruscant (pretty exciting) and Luke and Ben’s trip to Nam Chorios (which remain good). This, for me, was a missed opportunity – I have a fondness for legal thrillers, so a bit more attention and space spent on Tahiri’s court case would have been a nice opportunity to blend space opera and courtroom drama. Sadly, this was not to be.

Allston has a difficult task of keeping this series fresh and moving forward enough to keep readers engaged – after all, it’s the seventh in a series that, while enjoyable, has felt at times like it’s treading water, spinning its wheels because not much can be revealed without making the nine-book-length redundant. The story does move forward, and there are some pretty important events that will define the final two volumes and perhaps the Star Wars franchise beyond the end of the Fate of the Jedi.

Allston is aided in this task by his gift for writing, which shines through almost throughout the novel. There were a handful of passages that felt over-written, and a couple of sections of overly-descriptive exposition that were actually unnecessary; to begin with, therefore, I was a little disappointed (I should mention, he’s my favourite author still writing frequently for the Star Wars franchise, so I usually have very high hopes for his novels). As the novel and story progressed, however, Allston’s writing became much tighter.

Allston’s familiarity with the characters and obvious affection for them means Conviction is filled with many great moments, capturing their essences from the movies perfectly. I don’t think there’s an author who has written Han Solo and his relationship with Leia better in a very long time (perhaps not since Timothy Zahn and Kevin J. Anderson’s early Star Wars trilogies), or more true to the scoundrel we know from the movies – there’s a particular scene in Chief of State Daala’s waiting area that made me smile and chuckle a great deal (it’s pretty important to the plot, so I won’t go into more detail). Even the newer, non-movie characters – such as Ben Skywalker, Tahiri Veila, Vestara, Allana, and many of the Jedi – are well-drawn, and there is some good character evolution taking place. And, of course, R2-D2 and C-3PO offer a couple of their own comic moments.

Vestara, the Sith who has been tagging along with Luke and Ben for the past couple of books, is starting to feel a change in her own emotions and character, the longer she stays with the Skywalkers. It’s becoming difficult for her to dismiss their relationship as weak, and there is a definite softening and calming effect. And she so fancies Ben. There’s still more distance for her to go, however, and it will certainly be interesting to see if she succumbs to Ben’s charms, or if her Sith upbringing triumphs in the end. The Skywalkers’ plot thread didn’t seem quite as good this time around, however, and felt a little stretched out – where before it’s been by far my favourite aspect of the series. In fact, this is the first time when the events on Coruscant have been more interesting and entertaining than the Skywalkers’ exile and hunt for Abeloth.

The Jedi Masters, dealing with the tragedy that closed Vortex, the previous book in the series, are more pro-active and dour as they rally together to try to stop Daala from crushing the many slave revolts around the galaxy in what appears to be a distinctly brutal, Empire-like manner. There are hints of other conspiracies from a variety of quarters, but none of the novels thus far have gone into too much detail (again, probably a symptom of having to juggle so many perspectives and threads all at once), so again I imagine the next two novels will see them come to a head. After the previous novel, which featured more on the slave revolts around the galaxy, they take a less-prominent place as a whole in Conviction until the final few chapters (which are really used to position Allana – Han and Leia’s granddaughter – a little more at the centre of the story).

Conviction is a well-written novel, but I’m still not entirely sure where the series is going. The novel suffers from some of the same pitfalls as the other middle-novels in the series (as well as the middle-novels in the Legacy of the Force series), but benefits from the author’s ability to keep things interesting and fun. There are many plot elements that just won’t die (mad young Jedi) or seem like distractions, and this is frustrating. The ending, while tense, is a little frustrating – for both Skywalker and the Jedi, but also a little for the reader. I really hope the next two volumes – Ascension and Armageddon – up the ante considerably and deliver an ending worthy of the franchise.

If you’ve been following and enjoying the series so far, then you definitely have to read Conviction, as it is both enjoyable and moves the story along. However, if you’re hoping for any sort of closure on any of the bigger issues taking place in the Star Wars series, then you may be disappointed. Maybe we will come to see why the decision to make it a nine-book series were made, as it draws to a close. With a lot of plot threads still left unresolved, Christie Golden and Troy Denning have quite the task to bring the Fate of the Jedi to a satisfying close.

In related Star Wars fiction news, Random House, Del Rey and LucasBooks are in the process of bringing all the Star Wars novels to eBook format. I’m not sure how long this will take, or if specific series and/or authors will be given priority, but this is good news for eReader and Kindle owners who’d like to take their Star Wars fiction on the move.