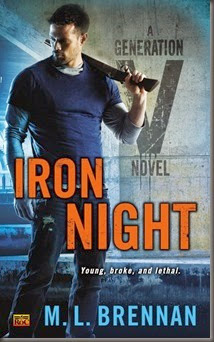 A second, fine mess Fortitude Scott has got himself into…

Underachieving film theory graduate and vampire Fortitude Scott may be waiting tables at a snooty restaurant run by a tyrannical chef who hates him, but the other parts of his life finally seem to be stabilizing. He’s learning how to rule the Scott family territory, hanging out more with his shapeshifting friend Suzume Hollis, and has actually found a decent roommate for once.

Until he finds his roommate’s dead body.

The Scott family cover-up machine swings into gear, but Fort is the only person trying to figure out who (or what) actually killed his friend. His hunt for a murderer leads to a creature that scares even his sociopathic family, and puts them all in deadly peril.

Keeping secrets, killing monsters, and still having to make it to work on time? Sometimes being a vampire really sucks.

The sequel to Generation V, in Iron Night, we get more of the same – which is by no means a bad thing. We get to see Fort embracing his vampire heritage a little more. Since he started going through his physical changes, he appears to have accepted that he can’t escape what he is, and as a result has stopped rebelling as much as he used to. Iron Night is a solid follow-up, complete with great character development.

There were times when Brennan was a bit over-descriptive, but for the main this is a focused novel. It expands on the mythology and supernatural community of Rhode Island, not to mention the politics involved. The story opens with a rather amusing meeting between Fort, his brother, Chivalry, and a community of trolls who live under a main bridge. They’re delivering goats, who seem to be rather partial to Fort’s clothing. (It’s not a new gag, but you cannot deny that it has universal, everlasting comic value.) It starts the novel out on an amusing high, and Brennan’s gentle wit makes plenty of appearances throughout the rest of the novel.

While the previous novel was focused on a rogue vampire, this novel takes a look at the strange death of Fort’s new roommate, Gage (who actually was quite cool). This surprising and bizarre death leads Fort and his kitsune companion, Suzume to a larger conspiracy – this was not the first death. I’d like to go into a bit more detail about the reasons behind the deaths, but as that lies at the core of the plot, I will resist – needless to say, Brennan is doing some great, original things with the various mythologies and fantasy/supernatural fauna who populate her version of Rhode Island.

Each of the returning characters is developed in the novel. Suzume is her mischievous self (although, slightly toned-down, which is explained near the end), and I loved her dynamic with Fort – she drives him crazy with her ribbing and tricks, but it feels like a genuine friendship and mutual respect. Mixed with frustration. Fort’s family continues to cause him grief, but it was great to see them in action against the antagonists (sorry that’s vague!), and also to see others’ reactions to them – especially Fort’s formidable sister, Prudence.

I think what I like most about this series is what the author is doing with the mythology. Iron Night felt like a slower book than the previous one, and the plot was pretty straightforward – however, neither of these things are negatives. Brennan is still building Fort’s place in the Rhode Island supernatural hierarchy and community, and with a very promising ending, I can only assume that there are bigger and better things to come.

A great stand-alone tale, I think Brennan is building something for a long-game. I, for one, will be sticking around to see how it all plays out. At the time of writing, I couldn’t find any information on a third novel in the series, but I really hope there are more novels featuring these characters.

Recommended for all fans of Urban Fantasy.

Both Generation V and Iron Night are out now in the US, published by Roc Books (they are available on import and eBook/Kindle in the UK, too). For more on Brennan’s writing and novels, be sure to check out her website, Goodreads, Facebook, and follow her on Twitter.