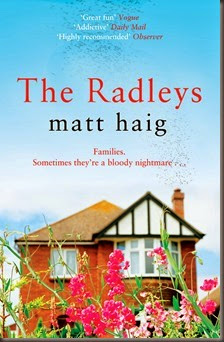 Just about everyone knows a family like the Radleys. Many of us grew up next door to one. They are a modern family, averagely content, averagely dysfunctional, living in a staid and quiet suburban English town. Peter is an overworked doctor whose wife, Helen, has become increasingly remote and uncommunicative. Rowan, their teenage son, is being bullied at school, and their anemic daughter, Clara, has recently become a vegan. They are typical, that is, save for one devastating exception: Peter and Helen are vampires and have – for seventeen years – been abstaining by choice from a life of chasing blood in the hope that their children could live normal lives.

One night, Clara finds herself driven to commit a shocking – and disturbingly satisfying – act of violence, and her parents are forced to explain their history of shadows and lies. A police investigation is launched that uncovers a richness of vampire history heretofore unknown to the general public. And when the malevolent and alluring Uncle Will, a practicing vampire, arrives to throw the police off Clara’s trail, he winds up throwing the whole house into temptation and turmoil and unleashing a host of dark secrets that threaten the Radleys’ marriage.

I really enjoyed this. I also read it quite a while ago, which is why I’m going to keep the review rather brief. It’s a different and original take on vampires – one that blends commentary on contemporary British society, middle-class life and anxieties, and is presented with a deft, light touch.

The Radleys addresses a number of everyday concerns, presented through the lens of a vampire family who are living under-the-radar in a sleepy British town. Their two kids do not know about their true nature, despite their strange cravings, aversion to sunlight, and difficulty in fitting in. As their parents’ marriage is strained by maintaining the charade (or masquerade, for RPG fans), we learn of their past, how they came to become vampires, and what they have sacrificed in order to protect their children, hide from their past and avoid the attentions of the Met’s vampire-hunting division. It is, ultimately, a moving domestic novel. The kids are teenagers, with all the relevant baggage, plus (un)natural outsider tendencies. When Clara is involved in an accident, after being accosted by one of the school jocks/brutes, Peter and Helen spring into action to protect her. 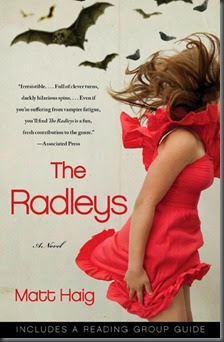 This event, and the arrival of Uncle Will (who does not shy away at all from his vampiric nature), sends the Radleys’ lives into a spiral, as they confront their long-suppressed natures. Peter, in particular, realises just how much he has missed being a vampire, and enjoying the powers that come with the condition.

“He closes his eyes and sees Clara’s face, the way it was as she stood by the road. She had looked so distraught and helpless, wanting the truth he’d never given her. Or at least, that’s what he had chosen to see. No. Even with blood inside him he is a different man from the one he left behind somewhere in the black hole of his twenties. He wasn’t his brother. He doubts he ever could be. Not now. As he arcs in the cold air, he admires the ocean, a vast steel sheet reflecting a fractured moon. No, I am a good man, he tells himself as he drags himself and his heavy conscience back towards home.”

Haig does a great job of exploring the costs of denying one’s true identity, the inherent appeal of ‘sinning’ (and the bizarre thrill of admitting to your children your past, less-than-virtuous experiences). The novel is not, however, all or over-serious. Haig has sprinkled throughout a great amount of light humour that helps flesh out this vampire-inhabited world, and also bring us closer to the characters.

‘And vampires don’t live for ever,’ Peter continues, ‘but if they stick to a strict blood diet and keep out of daylight they can last a very long time. Vampires over two hundred years old have been known. And some of the strictest ones fake their deaths at a young age, like Byron did on the battlefield in Greece, pretending he had trench foot. Then after that they assume a different identity every decade or so.’

‘Byron?’ Rowan can’t help but be consoled by this piece of information. His father nods, claps a supportive hand on his son’s knee.

‘He’s still alive, last I heard. I saw him back in the 1980s. DJing alongside Thomas De Quincey at some party at their cave in Ibiza. Don Juan and DJ Opium they called themselves. God knows if they’re still at it.’

Even before I had finished reading this, I bought Radley’s latest novel, The Humans, which I fully intend to read ASAP. Suffice it to say, The Radleys is a very good novel indeed. Haig’s prose is fluid and well-crafted, the novel is very-well paced (I raced through it), and his characters are by turns appealing, complex and difficult, but always realistic.

A must-read for anyone who is looking for vampire fiction very different to contemporary sub-genre mores. Recommended.

The Radleys is published in the UK by Canongate Books, and in the US by Free Press. For more on Haig’s writing, be sure to check out his website and Twitter.