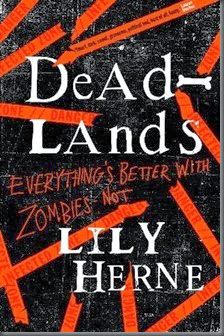 Welcome to the Deadlands, where life is a lottery.

Since the apocalypse, Cape Town’s suburbs have become zombie-infested Deadlands. Human survivors are protected from the living dead by sinister, shrouded figures – the Guardians. In return, five teenagers are “chosen” and handed over to them for a mysterious purpose: this year, Lele de la Fontein’s name is picked.

But Lele will not stick around and face whatever shady fate the Guardians have in store for her. She escapes, willing to take her chances in the Deadlands.

Alone, exiled and unable to return home, she runs into a misfit gang of renegade teens: Saint, a tough Batswana girl; Ginger, a wise-cracking Brit; and handsome Ash, a former child soldier. Under their tutelage, Lele learns how to seriously destroy zombies and together they uncover the corruption endemic in Cape Town, and come to learn the sickening truth about the Guardians …

I first heard about the mother-daughter writing team Lily Herne at World Fantasy Con 2013 in Brighton. I was walking along the signing corridor and Jared of Pornokitsch pulled me aside and introduced me to them. Since then, I have read The Three by Sarah Lotz (the mother of the duo), which I think will most likely be one of my Top 5 reads of 2014. Then, despite having a signed copy of Deadlands, I spotted the first two books in the series on sale for Kindle. I snapped them both up, and started reading Deadlands right away. And, I must say, I really enjoyed it.

The story is set in and around Cape Town. Ten years have passed since the city was destroyed in a War against the living dead. Zombies shuffle freely through the streets and Cape Town suburbs – which are now known as the ‘Deadlands’. The remaining living, dwindling in number, have congregated either in fenced-in farmlands or urban shantytowns. Watching over the living are the mysterious, robed “Guardians” – a race of humanoid figures who appeared at the end of the War and who somehow keep the zombies at bay. In return for this minimal form of protection, they demand from the survivors a very steep price: every year, there is a Lottery, through which five teenagers are selected, and taken away for some secret purpose. None of these teens is ever heard of again.

Into this mix comes Lele, recently relocated from the farmlands to the shantytown. Living with her father, unpleasant stepmother, and her brother, she is a teenager straining at the bounds of her new life, frustrated at home, and desperate to do something with her life. Her brother was one of the chosen, and he was returned damaged. He suffers now from learning disabilities and comes across as autistic, too. When Lele is selected through the lottery, though, she desperately tries to escape and return to help her brother. Instead, she stumbles across a group of “mall rats”, who have carved out their own life, separate from the shantytown and its leaders. They train Lele, and she begins her new life…

This was a really fun read. I blitzed through it, and really enjoyed not only the setting, but also Herne’s interpretation of the zombies. Lele’s struggles – emotional, physical – are realistic and it didn’t take long at all for me to become attached to her as a protagonist and guide to this post-apocalyptic world. Likewise, her friends and allies are well-drawn characters. It’s tricky to write too much more without spoiling the story, but needless to say things are set up rather well for the second book in the series, Death of a Saint, which I hope to read within the next week or two.

If you’re a fan of the post-apocalypse zombie genre, then you should definitely check out this series. It’s fun, well-conceived and executed, with a great protagonist and varied supporting cast. There’s an excellent balance between lighter and more serious content. It’s quite gripping. Absolutely recommended.

The third book in the series, The Army of the Lost, is due to be published in the UK by Much-In-Little (Constable & Robinson), on April 17th 2014.