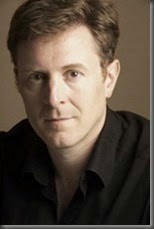 So far my Pantheon series extends to six novels and three novellas. What is it about these military-SF tales of gods and men that I seem to find so fascinating? Why do I keep coming back time and time again to this well of inspiration?

Partly it’s because the ideas embedded in polytheistic religious mythologies are so wonderfully rich and exploitable, like countless mines yielding up different seams of precious ore. I myself do not believe in deities of any kind, but the stories that others have came up with about them over the centuries are pleasingly intricate and complex, full of incident and nuance. Every Pantheon strikes me as being like a dysfunctional family. Their conflicts and passions echo those of their worshippers. Even though they’re gods, they’re eminently relatable. They banter and squabble, have affairs, plays tricks on one another, lose their temper, just as humans do. The aloof, monotheistic gods whose faiths prevail in the world today aren’t anywhere near as interesting. Those guys are like grumpy father figures you can’t get on with and have to tread carefully around but are still supposed to admire. Where’s the fun in that? 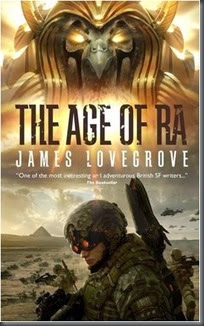 I didn’t set out to write a series. When Solaris, my publisher, commissioned Age Of Ra from me, I thought it would be a one-off, a slice of alternate history with a bit of Ancient Egyptian mythology thrown in to add savour. I certainly didn’t anticipate that I’d still be writing in the same subgenre seven years later, or even that that subgenre would have gained its own name, godpunk. But that’s me. I never plan things. Foresight is not my middle name.

The great thing about the Pantheon novels, as far as writing them goes, is that the tone of each is set by the individual tone of the myths which I’m dealing with. Age Of Odin, for instance, could only have taken place in a world caught in the grip of the Fimbulwinter, the three years of constant ice and snow that presage Ragnarok, and the bad guy could only have been Loki, the trickster, pitting himself against the other residents of Asgard as he does in the Sagas and the Skaldic poems. Likewise, Age Of Aztec just had to be about a high-tech, quasi-Aztec culture, full of human sacrifice, ziggurat temples, and flying saucers in the tradition of Chariots Of The Gods. Once I’ve started researching each book, the plot begins to suggest itself, arising organically from the background material. In a way, I have to do only half the work I otherwise might – half the backstory creation, half the worldbuilding. The other half has already been done for me by the people who dreamed up the original stories. You could even call this cheating. 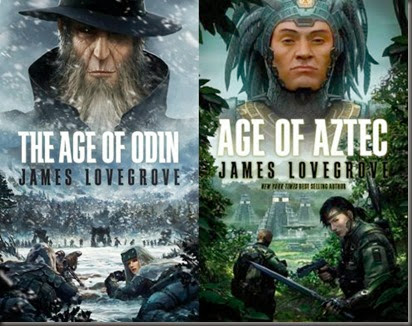 The latest volume in the series, Age Of Shiva, came about largely because I’ve long had a hankering to write a superhero tale, being the massive comics fan than I am. I perceived that the Hindu pantheon is, in many ways, a set of super-powered beings who battle demons, vampires and other monsters. They’re good guys with a clearly delineated set of bad guys ranged against them. That is, of course, a very reductive view of Hinduism, which is a great deal more complicated and beautifully arabesque and nowhere near as trivial as I’m making it sound. On the surface, however, at a purely primal level of storytelling, that is where it’s at. I thought to myself, “I could have some fun extrapolating a superhero story out of this mythology,” and so, as it proved, I did. 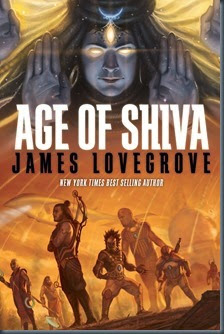 The plot focuses on a comic book artist who is employed by a multinational consortium to help on a secret project to create a real-live superhero team. Ten super-powered characters, based on the Ten Avatars of Vishnu, emerge into the glare of the media spotlight, and rapidly make a name for themselves, saving civilians from snake-men, sewer-dwelling vampires and the like. Things, however, get gnarlier and more complicated from there, and it isn’t long before the world’s balance of military power is destabilised and the threat of nuclear Armageddon looms.

That may all sound very serious, but as with the other Pantheon novels, Shiva is all about the action and the fun. The violence is over-the-top, and the protagonist’s narrative voice is, I hope, witty and wry.

I’m not sure what my next Pantheon novel will be, which set of gods it will concentrate on, what shape it will take. I’ve three other books to write first before I seriously have to start thinking about it. The joy of the concept, though, is that whichever pantheon I choose to exploit, I’ll be as surprised by the outcome as any reader.