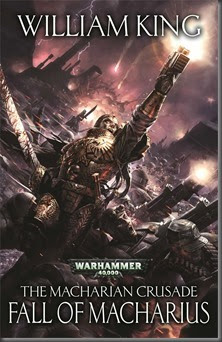 The epic conclusion to The Macharian Crusade trilogy.

Long-time readers of the blog will know that I’ve been a fan of William King’s fiction ever since I read his first Gotrek & Felix short story (now collected in Trollslayer and the First Gotrek & Felix Omnibus). I’ve fallen a bit behind, though, and I need to catch up with the previous book in the series, Fist of Demetrius.

For decades, Lord Solar Macharius and his loyal forces have crusaded across the stars, bringing the Imperial Truth to uncounted worlds and purging aliens and heretics from the dark places at the fringe of the galaxy. But all things must come to an end. His soldiers are weary, his generals fractious, and the legend of Macharius may no longer be enough to hold them together. Called by a representative of Terra to a council of generals, Macharius fears treachery – but will it come from closer to home than he could possibly imagine?

Fall of Macharius is due to be published in hardcover on July 22nd, 2014, by Black Library.