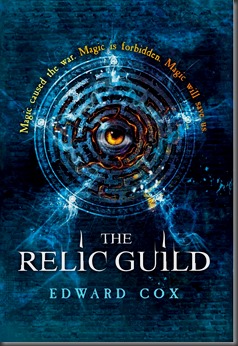 I’ve been lucky enough to read a (very) early draft of this, about a year and a half ago, before it was submitted to publishers for consideration. I can’t wait to see the final version. This cover, unveiled earlier this week, is awesome. The Relic Guild is, in my opinion, a must-read of 2014.

It was said the Labyrinth had once been the great meeting place, a sprawling city at the heart of an endless maze where a million humans hosted the Houses of the Aelfir. The Aelfir who had brought trade and riches, and a future full of promise. But when the Thaumaturgists, overlords of human and Aelfir alike, went to war, everything was ruined and the Labyrinth became an abandoned forbidden zone, where humans were trapped behind boundary walls a hundred feet high.

The only people Clara can trust are the Relic Guild, a secret band of magickers sworn to protect the Labyrinth. But the Relic Guild are now too few. To truly defeat their old nemesis Moor, mightier help will be required. To save the Labyrinth – and the lives of one million humans – Clara and the Relic Guild must find a way to contact the worlds beyond their walls.

Be sure to check out Edward Cox’s Tumblr and Twitter for more on his writing and exuberant personality (directly inverse to just how awesomely dark, atmospheric and Peake-ian his novel is). The Relic Guild is due to be published by Gollancz, on September 18th, 2014. It is also part of the publisher’s £1.99 Debut eBook promotion – which means there is no excuse for you to not check out this great new author. (At the time of writing, there weren’t yet any retail links to pre-order the novel, but I’ll be sure to share it ASAP.)