“Half Bad” by Sally Green (Penguin) 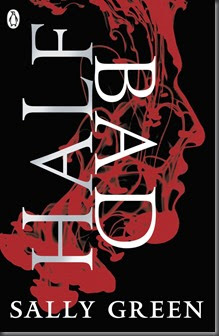 The most frustrating novel I still couldn’t stop reading

I have very, very mixed feelings about Half Bad. On the one hand, Green writes very well – there isn’t a bad sentence or garbled phrase in sight. The pacing is excellent. But, the story was in many ways deeply troubling, not to mention buried by certain choices the author made to make the novel more “gritty” (as she admits in the author’s acknowledgments at the end). Usually, I drop novels I don’t like very quickly, but with this one I kept reading. Partly because I was intrigued, but eventually because I was hopeful that the story-proper would begin at some point. Sadly, the novel did not properly deliver.

I’m going to keep this review relatively short. First, let’s take a look at the world Green has created – there are White witches and Black witches, who exist in contemporary society, operating in secret and divorced from ‘real’ world law. The Whites hunt the Blacks. Generally speaking, we’re shown a facile good-vs.-evil dynamic, heaped on top of which is a clunky “The Ends Justify the Means” approach to witch law and order. This is never more evident than in Nathan’s story. Most of the first half of the novel is basically a litany of child abuse. This, for me, was deeply troubling. The amount of time Green spends on detailing Nathan’s harsh treatment – whether it’s the imposed routine in the cage, or the frankly evil treatment he receives from a group of White “whets” (witches before they turn seventeen and acquire a gift). One scene in particular goes far beyond “cruel children” and into sociopathy/psychopathy. Green is obviously making the case that power corrupts and in dark times every method is justified. Nathan, you see, is the only half-White, half-Black witch. So, naturally, he must be treated so very, very badly. At length. To the exclusion of story.

Despite this disturbing level of cruelty, Half Bad is a well written novel – there’s no way I would have kept reading it otherwise. The novel is somewhat disconnected, with an emotional distant quite often. There were some moments when the narrator switched between first and second person for no discernible reason. The world-building is pretty good, though much of the social structure felt cribbed from Harry Potter (thankfully, though, there is no wizarding/witching school).

One character I did enjoy, who featured too fleeting, was Rose – she was delightfully off-kilter. Slightly demented, perhaps. Despite liking her, though, she is (like all of the characters, it felt) mere plot devices. They are all there purely to fulfill a specific function – development and growth is non-existent.

Over the course of the novel, Nathan and his eventual, small clique of allies learn of a particular item that his Most Wanted father is seeking (partly related to a vision). Nathan sets out to acquire this item. And does – in quite possibly the briefest and least exciting Quest for a maguffin, ever. There is a distinct lack of peril, Nathan sits on the sidelines, and the plan comes together with surprising, disappointing ease. This is an example of the imbalance between the story and the author’s apparent wish to really let the reader know how abused Nathan has been. It would have been preferable if this part of the story had been expanded and central to why we are here, rather than the first half of the book.

Half Bad is the most frustrating book that I’ve read all the way through. I have no idea if I did actually come close to liking it, or if it is one of the worst books I’ve read. If J.K. Rowling decided she hated Harry Potter with a fiery passion, and couldn’t be bothered to pay attention to the actual story, you might get something like Half Bad.

All I can hope is that the sequel, Half Wild, pays more attention to story and character development.