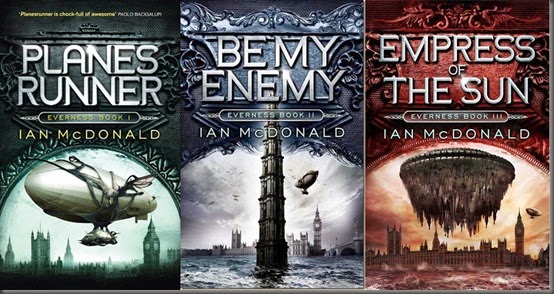 When Everett Singh’s scientist father is kidnapped from the streets of London, he leaves young Everett a mysterious app on his computer. Suddenly, this teenager has become the owner of the most valuable object in the multiverse — the Infundibulum — the map of all the parallel earths, and there are dark forces in the Ten Known Worlds who will stop at nothing to get it. They’ve got power, authority, the might of ten planets — some of them more technologically advanced than our Earth — at their fingertips. He’s got wits, intelligence, and a knack for Indian cooking.

Ian McDonald’s science fiction YA series – comprised of Planesrunner, Be My Enemy and Empress of the Sun – has been widely praised across the SFF community and all over the press. Despite that, it has taken me a long time to get around to giving it a try. Needless to say, it’s a lot of fun, and deserves all of the glowing reviews it has received. A must-read sci-fi series. 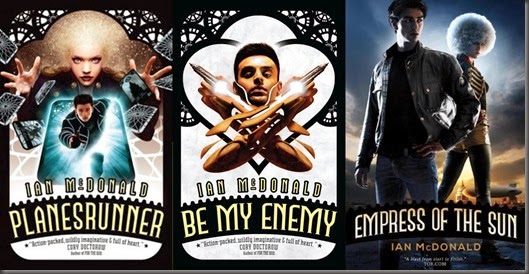 I am not much of an audiobook listener. Aside from a handful of Black Library audiodramas (usually clocking in at around an hour in length), I haven’t listened to many audiobooks since I was a kid – on our frequent, long drives between Germany and Austria, or Germany and the UK, we used to listen to The Lord of the Rings and Hitchhikers Guide to the Galaxy. However, I have received both printed and audio review copies of Ian McDonald’s critically-acclaimed Everness series. So, I decided to conduct an experiment, alternating between the print and audio depending on where I was – so, at the gym, on commutes, and walking into town, I would listen to the audiobooks; when I was at home, or in a café, I would read the books. This helped me get through them much quicker than I ordinarily would have (see below for more on this). This review will, therefore, be more of a comparison between the two mediums, rather than a book review proper.

Before I compare the audio- and print-book, however, I do just want to say that this series is really good. It’s action-packed, fun, well-composed and very well-written. Everett is a great protagonist, and I loved following his story. The book is filled with great observations, characters, and above all a great story. McDonald packs just as much science as action into his story, and, while there were a couple of moments when the explanations went on just a tad longer than the pacing supported, the author never talks down to his readers. It was great, fascinating stuff. Not only that, McDonald maintains the quality throughout, too – true, the first one has that New Series Fresh Feel, when everything is a new discovery. But, given the multi-dimensional storyline, each of these novels offers plenty of new discoveries and developments to experience and shape the characters (all of whom are developed well).

So. The audiobooks. Narrated by Tom Lawrence, they are actually excellent. The production is clear and very good. Lawrence’s delivery was very good, and his voice – a mixture of Richard Hammond and Rupert Grint, I thought – conveys the story very well. I think there were only a couple of moments that didn’t work for me (some of his accents weren’t great, but this was easily forgivable). Lawrence didn’t emphasise or ham-up the witty asides, which made them all the better.

The thing that made the audiobooks less satisfying than the novels is something that is entirely my issue, rather than the quality of the audio versions: the pacing. I am someone who frequently devours novels, blitzing through those I enjoy as I become hooked and Must Find Out What Happens. With an audiobook, you’re stuck at the narrator’s speed, regardless of how much you enjoy it. This is probably obvious, but given my preference for reading quickly, my switching between print and audio did mean I got through the novels much quicker than the recorded length of the Audible editions. I also find it easier to keep track of what I’m reading, rather than listening to (unless it’s from repeat listens).

Overall, then, the Everness series is a must read (or listen), and both the print and Audible editions are fantastic. If, like me, you read very quickly, then I’d recommend the print editions. But, if you’ve recently over-dosed on reading (as I had, when I started listening to these), or want a change, then these Lawrence-narrated audiobooks are great, too.

The Everness series is published in the UK by Jo Fletcher Books, in the US by Pyr Books, and also by Audible. Be sure to check out Ian’s website and follow him on Twitter for more on his writing and novels.