More Sebold on the Horizon! 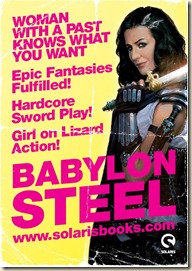 A Madame’s work is never done

That’s right, Gaie Sebold will be writing and Solaris will be publishing the sequel to the excellent Babylon Steel! This pleases me very much. Babylon Steel was a great mélange science-fiction novel, with humour and serious content, a fantastic heroine and a great story.

Here’s some more information on Dangerous Gifts, the second novel. First, the synopsis:

Babylon Steel runs the best brothel in Scalentine, city of portals. She’s escaped her past and it’s all going pretty well. Apart, that is, from the racial conflict and economic misery boiling up in Scalentine.

Her lover, Chief Bitternut of the City Militia, is trying to keep the lid on, while hunting a killer whose real target is a lot closer than he knows. Just as things are getting really tense, Babylon is forced to take another job. Bodyguard to Enthemmerlee Entaire: symbol of hope or object of disgust for most of her country’s population, and a prime target for assassination, along with anyone who happens to be in the way. Such as her bodyguard.

Unintentionally dragging a very annoyed government employee along in her wake, Babylon struggles to turn Enthemmerlee’s squabbling household guard from liability into security, dodge the rigid Moral Statutes of Incandress, and keep both herself and her client alive. She soon realises that the situation is far worse than she thought, her past hasn’t quite let go of her yet, and she will be driven to a choice that will have far-reaching consequences…

Dangerous Gifts is currently penciled in for a February 2013 release. No cover artwork available just yet, but I’m sure I’ll share it as-and-when it becomes public.

Gaie Sebold was born in the US, and lives in London. She has worked as a cleaner, secretary, till-monkey, stage-tour-manager, and editor. She now wrangles a database, runs occasional writing workshops, and is a member of the critique group T Party Writers. She is an obsessive reader, enthusiastically inefficient gardener, and has been known to run around in woods hitting people with latex swords and to declaim poetry in public, though not usually at the same time. She also has the standard cat apparently issued to most fantasy writers.

As well as the next Babylon novel, she is working on the blog Weeding and Writing with her partner, writer Dave Gullen; a poetry project; and a fantasy romance, with orcs. She likes orcs. You can find Gaie at her website.