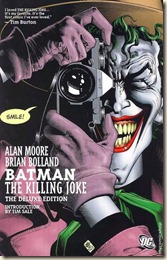 When the Joker commits an unspeakable crime, Batman must use all his skill to outwit the crazed criminal. But in the end, how different are the Dark Knight and his quarry?

I wasn’t originally going to review this book, but I had a few things I wanted to say about it. And I can’t seem to help myself when it comes to reviewing stuff… So here are just some quick thoughts.

Right off the bat, I should state that I thought the book was very good. Most of the attention is paid to the artwork, which is justified as it’s superb. The deluxe edition of Killing Joke has been recoloured by Bolland and, while I never read this in the original colouring, a simple Google search will throw out plenty of examples and comparisons. I’m very glad the artist re-did things (he didn’t handle colouring duties for the original), as it looks infinitely better. I particularly liked the way Bolland has differentiated the flashbacks from the “present”, by adding a faded, almost grey-sepia-filter to the panels, and picking out just certain details for emphasis, a little like Schindler’s List’s red coat (only, in this case it’s a red hood or shrimp). 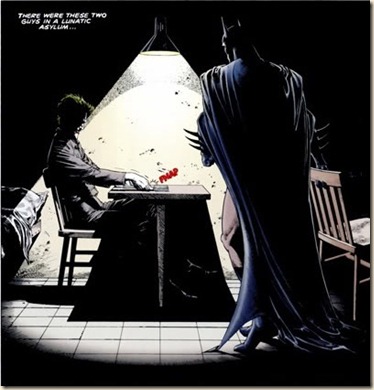 Speaking of the flashbacks, Bolland was the instigator of the project, but he hadn’t been keen on the idea of detailing the Joker’s past, so considers this just one possibility that is floating about in the maniac’s addled mind.

As for the story itself, it has a classic feel to it – it’s the Joker versus Batman, after all – but Moore has added a real sinister air to the narrative. Anyone familiar with Batgirl (either pre- or post-New 52 reboot) will want to read this, too, as it contains the event that forced Barbara to shift her activities and identity from Batgirl to Oracle. If I had read this when it first came out (in 1988), I have no doubt I would have been stunned by that page, but the impact was lessened because I was already familiar with it from flashbacks in Gail Simone’s New 52 Batgirl series (which is superb also).

I think that is why I didn’t love the book, actually: Because I was already familiar with a lot of what happens in here – especially the most shocking, brutal and game-changing event – the book’s impact was a lot less than I had originally anticipated. That’s not to mean I didn’t enjoy reading it, just that I think many new readers might not ‘get’ why this is such a beloved title. The psychology behind the Joker and Batman’s tumultuous relationship is well-done, but Moore hasn’t gone as deep as some more-recent writers, which again I think will reduce the impact for new readers. 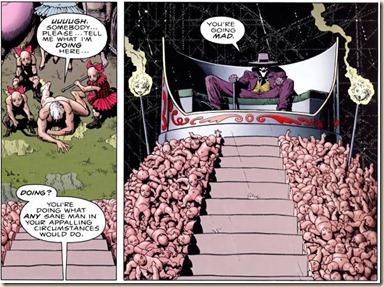 That being said, if you have any interest in the Batman-Joker relationship, or are a fan of Batgirl, then I would certainly recommend you read this book. It’s a stunning graphic novel – from the artwork within to the embossed hardcover (I have the Titan Books UK Deluxe Edition), this is a wonderful production. 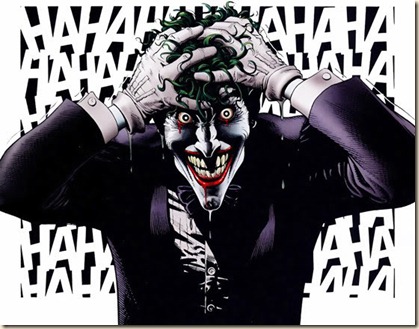 Posted by Civilian Reader at 9:18 PM