A quick review of some of this week’s comics. It’s another broad and pretty high-quality selection, with some of the best new series and intriguing continuing series.

I wish I could still offer more DC and Marvel series reviews, but I may be able to in the near future. Watch this space. 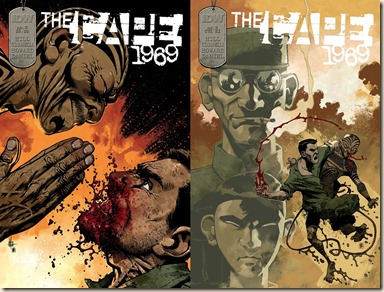 Shot down, imprisoned, beaten, tortured, his crew murdered-none of these things will compare to what Captain Chase will experience next. Watch as his sanity it tested and he struggles to keep his grip on reality.

This is a very cool, dark look at the origins of “the Cape”, and the Chases’ introduction to, well, weird shit.

The strange “witch” that we met in issue one (and on the cover of this issue) is imprisoned alongside Captain Chase by the Vietnamese soldiers. A brutal task is given to them, and we really start to see where this ability to fly has come from. In the meantime, we see that two of his captors are actually Vietnamese-American: a father and son, whose allegiances are not yet clear. 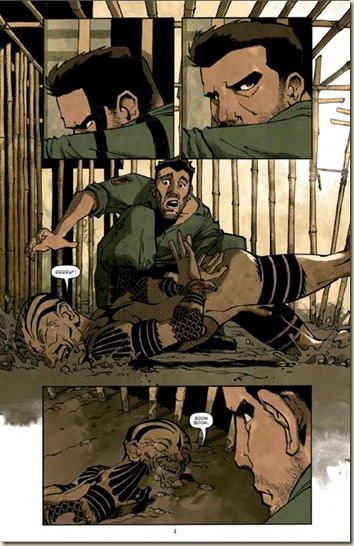 I really enjoyed the Cape mini-series, and I’m definitely liking this prequel (of sorts). If you liked any of Hill’s other Cape stories, then I strongly recommend this. If you’re looking for a weird Vietnam-era story, then this will suit those needs as well. 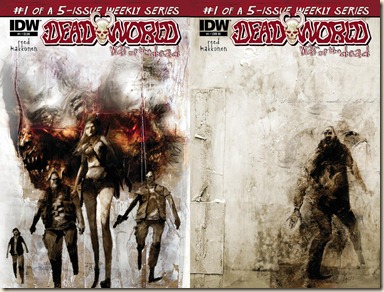 The undead have overrun the Earth! A small outpost, remnants of a twisted scientists’ scheme to defeat the plague, holds out against the army of King Zombie with their secret weapon, the Lepers-victims of a bizarre experiment that left them with dead flesh in breathing husks with flesh that even zombies won’t touch.

This is a deliciously dark comic. I like this version of a zombie-apocalypse dystopia. It’s located in a shared world with which I’ve never had any experience, but there’s enough in the narrative and dialogue to help locate new readers and refresh the memories of established readers. The inclusion of the leprosy experiments and how that affects the “living’s” ability to survive and walk among the dead is really innovative.

Yet more evidence that the zombie genre still has a little life in it yet. I’m really looking forward to the next issue. The artwork is wonderfully grimy, dark and atmospheric, and does wonderful things for the text and story. 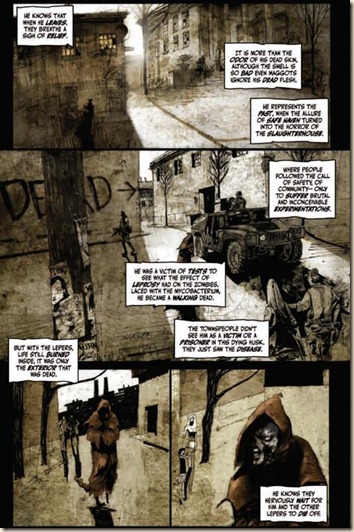 Recommended for fans of zombie literature, looking for something new and a little different. 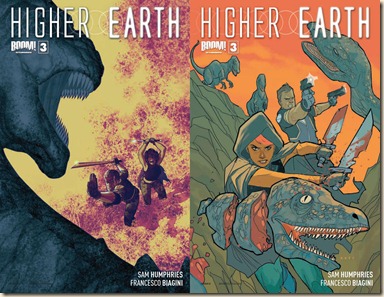 Still on the run, Heidi and Rex land on the strangest, most dangerous planet yet. Filled with primordial creatures and the even deadlier battle tech of Higher Earth, Heidi and Rex are quickly running out of places to hide…

Heidi and Rex have arrived on a world that never experienced an extinction-level event, and is therefore largely untouched by man and still populated by dinosaurs (hence the cover art). It does mean, however, that the empire of Higher Earth has started to exploit the millions-of-years-worth of natural resources on the planet, and is moving in quickly to harvest everything it can. Rex explains to Heidi what they see, helping her understand how the Empire works and how it exploits other Earths: 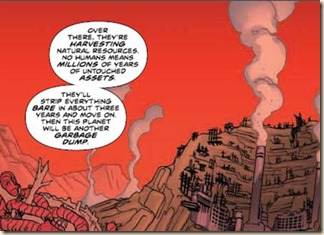 It’s very cynical, and obviously has parallels to our own world, and unscrupulous, greedy corporate strategies. Heidi, in her rather naïve way, is having difficulty accepting the how Higher Earth treats other Earths, which is of course driving Rex nuts, unable to make her realise that she’s powerless in the face of the Empire’s voracious appetites and ruthless MO. She often makes him look like this: 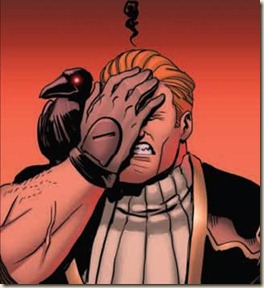 While Rex and Heidi are debating the finer points of imperialism, they are interrupted by a hostile agent, which gives Humphries the opportunity to fill readers in a little more on what’s actually going on. Only a little more, mind, as I was still left on tenterhooks at the end as the author feeds us two more tantalising tidbits.

I originally had my reservations about Higher Earth, but it’s really starting to take off, and I’m definitely interested in following this series on into the future. This is a very cool sci-fi comic. 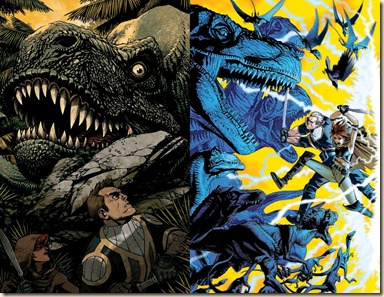 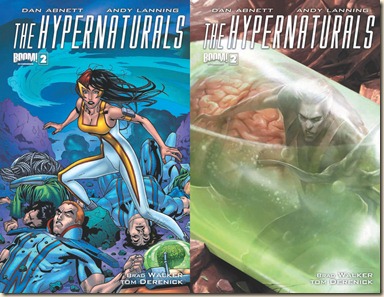 Long retired members of The Hypernaturals, Bewilder and Thinkwell, must assess the team’s ability to protect earth from the new, mysterious threat that has already decimated their most powerful members. Left with little to choose from but rookies and burn-outs, the Hypernaturals are running out of time…

I quite like this series. It’s doing something different with super-heroes (something we have come to expect from Boom Studios) – for one, we’re looking at a universe with technology that is way into the future of our own. It’s also written by Abnett and Lanning – two superb writers (currently also working on, for example, DC’s New 52 Resurrection Man – another series I really like). There’s a quirky, low-key sense of humour running through the comic. 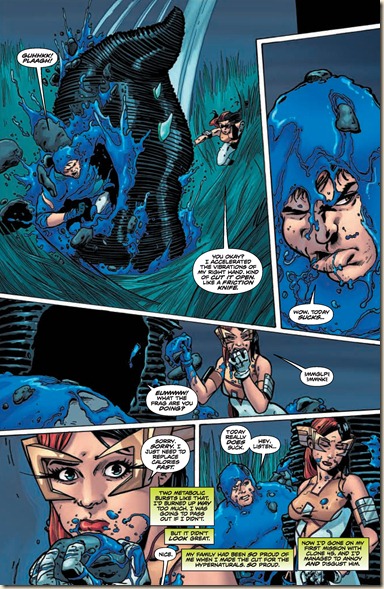 My main concern with this comic is the perhaps-ironic narrative and exposition. There’s quite a lot of it, and I’m not sure if the writers are being ironic by giving so much information on what the characters’ powers are, and having them explain things and throw out neologisms left and right… It’s rather amusing to begin with, but then I’d be lying if I didn’t think it became just a tad over-done.

I’ve really no idea where this series is going in the future. It has plenty going for it, but part of me wonders if it will work better as a collected edition at the end. Nevertheless, I’m still eagerly awaiting the next issue. 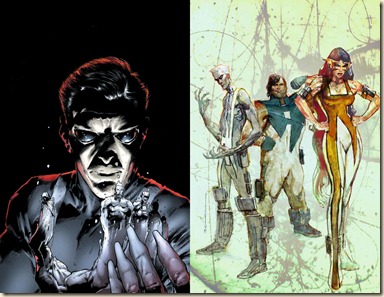 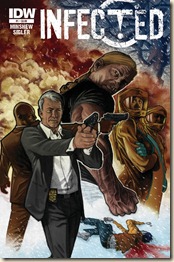 The story of a mysterious disease that turns ordinary people into paranoid, raving murderers.

Former all-pro linebacker Perry Dawsey awakens to find mysterious welts growing on his body. Soon after, strange voices start whispering, telling him to do horrible things… he is infected. The disease wants something from Perry, something that could alter the fate of the human race.

This is the first part in a comics-adaptation of Book One of New York Times best-selling Scott Sigler’s horror trilogy. This is very cool, too. The story flows at a very brisk pace – there’s a fair bit of text, but it doesn’t feel like a crutch, and the art does a lot of the story-telling work as well. There are some pretty gruesome scenes, as a couple of the characters succumb to whatever it is that’s driving people homicidally insane.

It just an opening salvo, so we are left with a lot of questions unanswered and tantalising hints of what is to come. This is a really cool comic, and the premise is great. I think I’m going to have to read some of Sigler’s novels, too. If you’re unsure about trying one of this books, then give this issue a try – if you like the story, I imagine you’ll like the novel.

Definitely a series to watch. I really enjoyed this. 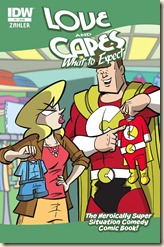 Mark and Abby, comicdom’s favorite couple is having a baby, and they’re not telling anyone yet. But will they be able to keep the secret from Darkblade, the world’s best detective? And what problems come about when you’re expecting a super baby? Plus, Mark has a secret of his own.

I’d never heard of this series before this week. So, a little background, in case you haven’t, either: Abby is the owner of a small bookstore. Mark, her husband is an accountant. And also The Crusader, the most powerful superhero on Earth. Last issue, Abby declared that she was pregnant.

This is a pretty endearing comic. It’s light-hearted, reminiscent of Cartoon Network (in my mind, anyway), and has a few tongue-in-cheek nods to better-known comic series – for example, Darkblade, who is basically Batman, and his partner Amazonia is blatantly Wonder Woman; the Crusader is a superman analog. 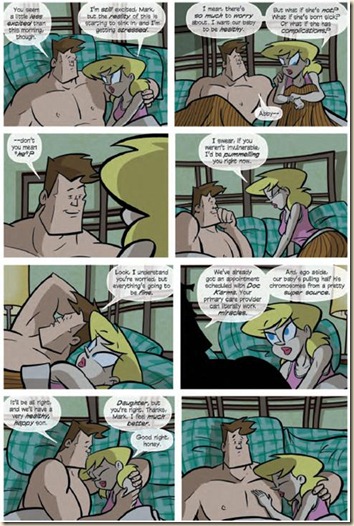 It’s a very different type of comic to what I’m used to reading, and what I generally prefer to read. However, it’s not without its charm. It’s like Supurbia, but minus the Desperate Housewives-esque soap-opera dramatics. It pokes a little fun at tropes, too, but featuring so many of them.

Not bad. If you’re after some whimsy, and lighter fare, then this could suit your needs. I think it would appeal to fans of Scott Pilgrim and stories of that ilk, too. This could be a fun storyline to follow. 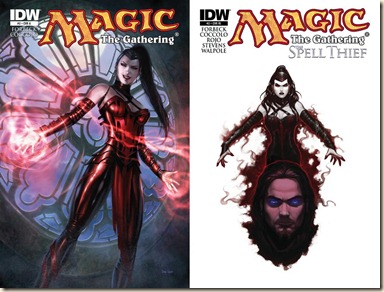 Fayden barely escapes the Collector’s prison... and now finds himself back on his home plane of Fiora. Forced to confront the destruction of his hometown, Dack relives the painful memories as he seeks clues that will lead him back on the trail of the malevolent Sifa Grent. Dack must find the strength within himself to carry on or his burden of guilt may prove too overwhelming for the Planeswalker thief.

Another great issue in this series. It takes a break from the main storyline, and instead looks back at Dack’s past, to give us just a little more information about our hero and his exploits – not to mention, how he came to be the spell thief, and how he came to be chasing Sifa Gent. Some of the information won’t be new to people who read the previous story-arc, but Forbeck adds more to the background.

I am still really enjoying this series, and I still think it’s a must for fans of Magic The Gathering as well as fantasy and comics in general. Great stuff. Can’t wait for issue three. Forbeck has really lucked out with the artistic team, too, who produce some great art and make the comic really vivid, dynamic and eye-catching.

Posted by Civilian Reader at 6:44 PM