“Guardians of the Phoenix” by Eric Brown (Solaris) 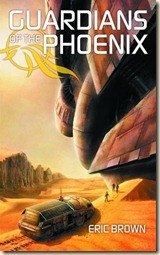 For ten years, Paul has scrabbled for survival among the sand-shrouded ruins of the once-great city of Paris. The seas have dried up, deserts cover much of the Earth’s surface, and humanity has been all but annihilated, as much by the drought as by the nuclear and biological conflicts following the great Breakdown.

Desperate bands of humans still survive. Some scrape a living in the remains of shattered cities; others resort to murder and cannibalism to survive. When Paul is rescued from one such group of killers, he joins his benefactors in their journey south in search of water and salvation.

Guardians of the Phoenix tells the story of the last survivors on planet Earth, their desperate fight for survival and their last hope to save the world.

Whenever you pick up a book by an author who you’ve never heard of, you don’t really know what to expect when you go into it. Is it going to be a good read? Is it going to be a bad one? With Eric Brown though, I’ve heard a lot about him and his work before, and most of it good. The author is prolific, with fifteen novels already published (not including children’s books), and has also been a reviewer and an editor. I’ve been interested in picking up Brown’s novels for a while now, but I finally decided to take the plunge with the standalone novel Guardians of the Phoenix.

The main character of Guardians of the Phoenix is Paul, and when we kick off this novel, we see him as a youngster living with an old lady in what was once Paris, where we meet him struggling to survive in an age where mankind as a whole is also struggling. Brown writes a grim, dark outlook on humanity’s future and although the author doesn’t go into more detail about what happened during the Great Breakdown, its lasting effects are clear. This is a world that nobody would want to live in given the choice.

I came to Guardians of the Phoenix with perhaps greater expectations than I should have had, as I was ultimately disappointed by the novel. Guardians of the Phoenix didn’t really grab me and draw me in as much as I wanted it to. It’s predictable, with a simple plot, the main character is uninteresting, and the storyline just failed to grab me. I even had to put it down at one point – although that was partly due to a much more appealing book turning up on my doorstep while I was reading this novel. (James Swallow’s Fear to Tread, in case you’re interested.)

The pace is fast, sure, and Brown includes a lot of cliff-hangers at the end of each chapter to keep you reading, sending the reader on a bit of a roller-coaster ride throughout the course of the novel. The author has also included some great descriptions of the deserted European world, which is one of the book’s redeeming features.

However, for every good point, there seems to be a bad one. A plot hole which kept bugging me throughout this novel is the poor explanation that the author gave for how the entire world’s water dried up – it didn’t really quite feel believable, which was a shame as this is one of the core aspects of Guardians of the Phoenix’s plot.

But Guardians of the Phoenix isn’t a complete waste of time – if it was, I would never have finished it. It’s a coming of age tale that has an interesting start, and Paul (whilst uninteresting), does develop over the course of the novel. And If you’re someone who struggles to keep up with a novel that contains loads of characters, then you should have no problem with Guardians of the Phoenix as it switches between a small cast of heroes and villains to keep the pace fast and give you different viewpoints of the overall storyline.

The novel itself is also action packed, and there are plenty of encounters that ensure that there is always something going on, no matter if is the first or the last page, which is one of the few things that kept me reading.

Overall, Guardians of the Phoenix is a mixed read that unfortunately will leave the reader disappointed, and one that I felt could have really benefited from being longer, which would have allowed the author to perhaps sort out the plot-hole and make the characters more believable and interesting.