A smaller selection this week, and a pleasantly varied one yet again – some horror, off-beat thriller (with an alien), some ninja-military action, and a pair of Star Wars adventures. I’m not entirely impressed with all the issues (in fact, I only really liked two of them, while each of the others fell slightly short of meeting my expectations). 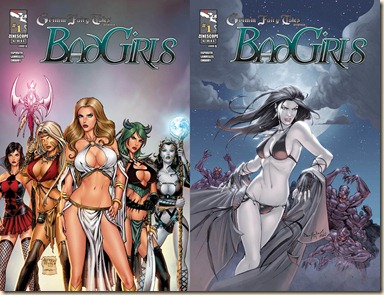 What happens when the most evil and powerful female characters in the Grimm Universe join forces? You’ll find out in this new miniseries that brings together an all star cast of girls that were born to be bad. The Mistress of Limbo has gathered together a team of allies from across the four realms of power. Will anyone be able to stand against the united power of Baba Yaga, the Goblin Queen and the Queen of spades? Don’t miss the baddest series in the history of Grimm Fairy Tales.

The title and the artwork don’t exactly bode well for this comic’s chances of getting a good score on the Bechdel test… Nevertheless, this is the style Zenescope’s always used (as far as I can tell), so let’s move on to the story within…

First off, there’s a note on the first page that states “this story takes place after the events of Grimm Fairy Tales #80 and #81”… Given that issue #75 was released last week, I’m a little confused as to why they would release this five-to-six months before the events that are supposed to precede it.

I’m not too impressed with this issue, to be honest. Sela, apparently, is like Superwoman – she can fly and can fire blasts out of her hands that can kill beasties – which was a new development. The “Bad Girls” of the title just hang around in skimpy clothing for the few panels they are in, and Sela does everything else.

I’m not really sure what this series is meant to be, or why it’s been released now. Or even why it needs to be a separate series, given what’s happening in the main Grimm Fairy Tales series.

Is this a little evidence of Zenescope pulling a Marvel, and creating multiple series that look at the same events, providing the smallest part of a larger picture? Field agent Ashley Strode attempts to purge a demon from a 100-year-old exorcist, utilizing a deadly rite that sends both of them into a spiritual hell.

This has some pretty interesting stuff going on inside. The issue has perhaps the best panel/page out of all this week’s reviewed titles, too (when we first see the owl-demon pictured on the cover). It’s an interesting issue, and it brings this mini-story-arc to a good close, with promise for Strode’s future. The ending is bittersweet, however, and I like how it’s been written and rendered (to go with the demon owl, there’s also a demon goat…).

I’m still only just getting to grips with the expansive B.P.R.D. universe and variety of series, mini-series and spin-offs. This is no bad thing, of course, as I’ve really enjoyed what I’ve read so far (despite, on occasion, being lost).

It’s definitely a series I want to invest more time into catching up on, and I think any fantasy/supernatural/sci-fi/occult fan will find something in the series to appeal to their tastes. 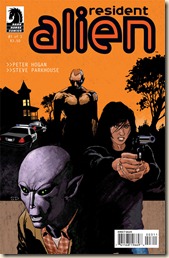 Stranded and living undercover on our planet, the alien now known as Dr. Harry Vanderspeigle races to solve a small-town crime before federal agents close in on him and discover his secret! Biding his time in the sleepy town of Patience, USA, Dr. Harry has masked his existence with a form of alien telepathy. There are those who are resistant to his strange powers, however, and Harry’s time is running out. Someone very close to him is about to blow his cover!

This issue didn’t have quite the end I had been expecting – mainly because there is no real end. We get the conclusion to the murder-mystery that Harry’s been investigating, but then the ground-work for the next story arc (“The Suicide Blonde”) is set up. It’s pretty well written, but this left me feeling a bit underwhelmed, given my expectations of this being the end. I’m glad there’s going to be more in the future, as I really enjoy the writing and think the premise is pretty great.

I’ll certainly be keeping my eye out for the next volume, but I’d be lying if I didn’t say I’d been expecting more from this issue. 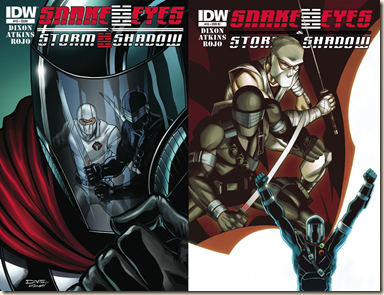 G.I. Joe thinks SNAKE EYES is dead—but in reality, he’s joined the Arashikage: the ninja clan commanded by his sword-brother, Storm Shadow. After being betrayed by Cobra, Storm Shadow believes he and Snake Eyes share a common enemy… but Snake Eyes is actually infiltrating in order to destroy the clan.

After the failure of the first mission to assassinate Zartan, another member of the Arashikage, Rika, begins to suspect Snake Eyes’ treachery. Storm Shadow pairs Rika and Snake Eyes and sends them to Tokyo, where Zartan has arrived with his entourage. But Cobra makes its own attempt on Zartan, and Snake Eyes is forced to knock out Rika and give chase to Cobra’s master of disguise. As Zartan takes off on his private jet, Snake Eyes storms onboard, plants an explosive charge, and leaps back into Tokyo Bay...

Snake Eyes’s operations from within the Arashikage continue, as he attempts to kill Zartan (who appears to be the slipperiest bastard in comics). In the meantime, Rika continues her attempts to convince Storm Shadow that his old friend has his own agenda and is not necessarily working for the good of the clan. Storm Shadow also learns of Cobra Commander’s role in the death of the previous Oyabun, and decides to mete out some ninja justice. Unfortunately, the Commander is one step ahead of the Storm Shadow…

This is a great issue. Dixon’s writing remains very strong, and I enjoyed the progression of the narrative as well as the interspersed flashbacks that tell us more of Snake Eyes and Storm Shadow’s shared past – they’ve featured ever since Snake Eyes paired up with Storm Shadow a couple issues back. Both the main and flashback sequences are also brilliantly rendered – the artwork is clean and detailed, and very dynamic.

A superb series in the G.I.Joe franchise, I’m eager to find out what happens next and how the paired-series will end! 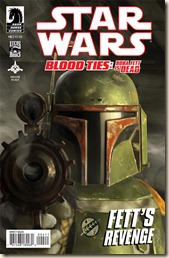 The man behind the murder of Boba Fett has sent his army of mercenaries to kill Fett’s ex-wife and child, and Boba’s half-brother Connor Freeman.

But what if Boba Fett isn’t quite as dead as everyone thinks? Then there might be... Hell. To. Pay.

This is an issue of dual personalities. The first is whimsical and quite fun (anything with Ailyn, Fett’s daughter – she’s delightful), but the second is… well, just poor. The Governor’s dialogue at the start (pages 5-9) is just terrible – completely cliché, rather melodramatic, and it didn’t ring true at all – and he never gets much better than that. The final part in the Boba Fett is Dead story arc, things are pretty quickly wrapped up, which was fine. It didn’t elevate the comic particularly high, and was a bit of a weak ending compared to the rest of the series, but it was enjoyable and there were some interesting and amusing moments in here. I could have done with some more character development and fewer pages given over to just action.

I assume there are going to be more Blood Ties comics, and I hope there are. This is a series to read in its entirety – the four issues together should work very well, and probably make up for any perceived shortfall in the final issue. I think I’ll go back and read them all together at some point soon. 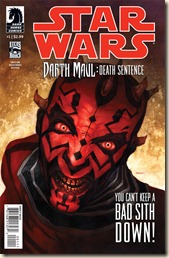 By now the galaxy has learned the terrible truth: Sith Lord Darth Maul still lives. Worse, he has joined forces with his brother Savage Opress!

The Jedi are searching for them and, after Maul and Opress cut a murderous swath through the Outer Rim, so is an army of mercenaries hired by a wealthy mine owner.

Darth Maul has a price on his head, and for him there is only one way to deal with such a problem: go directly to the source!

[This is a direct follow-up to the events in the The Clone Wars TV Series.]

“Interesting, a comic about Darth Maul’s past,” I thought when I first heard about this series. But no. This is a series set after he was sliced in half and fell to his death in Episode I. As it turns out, he didn’t die, and instead someone gave him a scary mechanical lower-half…

After just accepting this fact, Darth Maul: Death Sentence is not too bad. As an opening salvo it does everything we need an introductory issue to do – we learn what we need to about the two brothers (is it me, or is Savage a bit dim?), and everything about how they operate. They have a rather odd tendency of constantly referring to each other as “Brother” and replying with the same.

It’s only the first issue, so I’m going to withhold proper judgment until I’ve read at least one more. This could go either way, at the moment, but ultimately this chapter just didn’t really leave me with much of an impression one way or another.