Another catch-up post, this time focusing on Star Wars and BPRD-related comics from Dark Horse. A rather mixed bag, actually, despite being drawn from only a small selection of larger series. I think I’ll need to read more BPRD and Baltimore to properly appreciate the issues reviewed today, but overall I really like the aesthetic and supernatural-heavy stories. 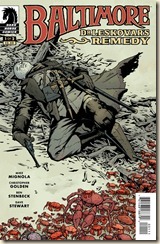 An army of malformed vampires controls a small Croatian town, but Lord Henry Baltimore arrives to put an end to this madness, fighting his way to their creator – a twisted surgeon akin to Moreau and Mengele!

This is my first Baltimore comic, and while I really liked it, I think I need to read the first and second Baltimore books (“Plague Ships” and “Curse Bells”, respectively) in order to appreciate it fully. I think my local bookstore has the first in stock, so I’ll pick it up one day and post a review up here. Hopefully soon.

If you’re familiar with the series, though, I think you’ll like it – it’s an interesting story. Just one set in a world I need more experience with first. Watch this space. 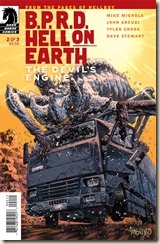 A B.P.R.D. agent teams with a psychic crust-punk to combat giant bat-faced monsters as all hell breaks lose!

There are a couple of storylines running through this issue, and while I really enjoyed it, I’m not sure how it’s all going to tie up in one more issue. I also don’t know how this all fits into the greater BPRD story. It’s entirely possible that I should have started from the beginning, rather than diving in, even if the previous issue was numbered #1…

Regardless, it’s a pretty cool series, and one I think I’d very much like to read more of. I have no doubt, though, that long time readers will enjoy this. And those bat-faced things are creepy. 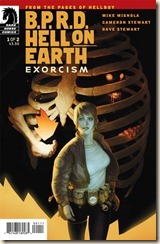 Field agent Ashley Strode, last seen in B.P.R.D.: War on Frogs, is deployed to a Mexican village after a demon commands her to release one of its brethren, or lose the soul of a small child.

How are an exorcism in 1890s Africa connected to one in modern day Indiana? Excellent question, and that’s what this mini-series is all about. Agent Strode is present at an exorcism before the demon inhabiting the boy comes forth, claiming to be a messenger for a greater evil. 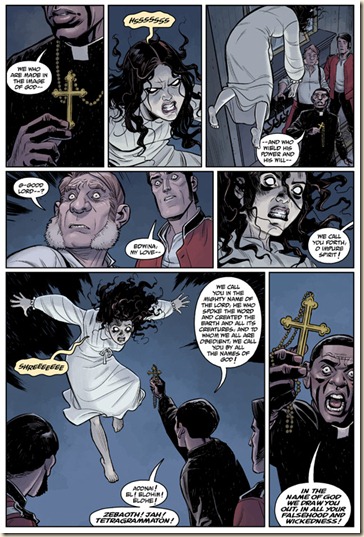 I must say, when we learn of how everything is connected, I hadn’t expected it at all. This is a very cool bit of demonology and exorcism lore. Really engaging, very well-written and nicely visualised, too.

Definitely recommended. This is a great comic. 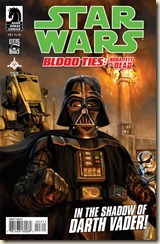 Boba Fett’s half-clone half brother Connor Freeman has stepped into a firefight! Tasked with protecting Boba’s former wife and daughter while Fett’s killer is found, Connor finds himself up against a Devaronian hit-squad!

Meanwhile, as Darth Vader searches for the intruder who so explosively infiltrated the Imperial base on Blackfel, the intruder is setting up an elite stormtrooper platoon for a huge fall!

This is a very action-packed issue, kicking off with an introduction to life on Blackfel for the elite stormtroopers (Vader is on the planet, and we all know how inflexible he is…). The mysterious intruder on the planet has risked everything to capture and interrogate one man – will he survive?

At the same time, Connor, Sintas Vel and Ailyn fend off a rampaging group of Devaronians. It’s not clear why they’re there, but our heroes make short work of them before heading for safety. Ailyn’s a good character, and I particularly enjoyed the Story Time scene between her and Connor.

I like the artwork in this series – it’s not sharp, but it does have a painted-feel to it, which gives it a lot of atmosphere. Very nice style. The example below also shows how kick-ass Ailyn is – not surprising, given her parentage… 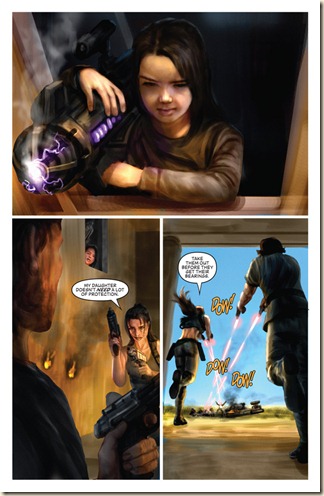 This is a pretty good issue, but I did find the dialogue a bit stilted to begin with – it was rather bad during the action-packed first few pages, but it did get much better after that (really for the second half of the issue it was infinitely better). We learn more details of the conspiracy behind the attempt on Fett’s life, and Connor realises just how much trouble he’s managed to get himself into…

I’m definitely looking forward to the next issue. 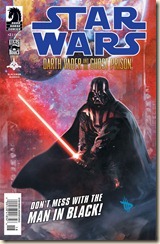 Graduating cadet Tohm’s first night as an Imperial officer has already seen him assisting Darth Vader in fighting a traitorous uprising, saving Emperor Palpatine from a deadly plague weapon, and keeping the peace between Vader and the cybernetic Moff Trachta.

Now Tohm and Vader have infiltrated the deathly stillness of the abandoned Jedi Temple to confront the secrets of Vader’s past, and to learn the facts about the Ghost Prison!

There’s a lot about this issue that is pretty interesting. For one thing, Vader shows compassion towards Tohm, who is taken under the Dark Lord’s wing and protection, as they attempt to get to the bottom of the rebellion. The Emperor has been nearly killed by a poisonous gas, released by the rebellious Imperial cadets and their headmaster. Darth Vader, Tohm and Trachta spirit their leader away, to a secret base, the “Crypt”, where he will be able to heal and also away from further attempts on his life.

As the officer rebellion continues, Darth Vader and Tohm search for clues in the abandoned, off-limits Jedi Temple, while Trachta fends for himself against other planned attacks from Gentis, the traitorous training school headmaster.

This is a pretty interesting story, set early in the years of the Empire, as they continue to solidify their right and ability to rule. It’s very well written, and the artwork is pretty great. It’ll certainly be interesting to see where this goes, and also what the significance of the Ghost Prison actually is – thus far, we don’t really know what it is, or why we should care. 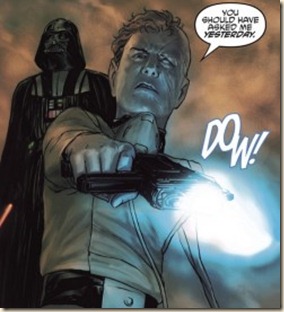 Highly recommended for all fans of Star Wars and Darth Vader in particular. 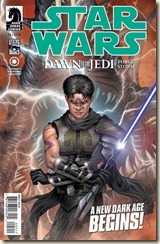 On ancient Tython, the Force is out of balance, causing a massive Force storm which could destroy the entire planet!

As three mighty Je’daii Masters strive to subdue the storm, three of their students struggle to forge an uneasy alliance with the dark stranger whose presence created the storm in the first place.

As the first arc of the epic tale comes to a close, powers beyond even the Je’daii’s understanding will be revealed, and a threat to the galaxy at large will be unveiled!

The final part of the first arc, it’s an interesting conclusion. There’s a ton of action, of course, but this means there’s not a whole lot of story. Near the end, though, the Je’daii attempt to learn more about Xesh, the Dark Side Force Hound who crashed on Tython. Xesh’s actions at the centre of the Force Storm are interesting, too, as he acts out of character and sees the young Je’daii act in ways that are alien to him, his upbringing, and his training (i.e. they help each other, and protect each other). 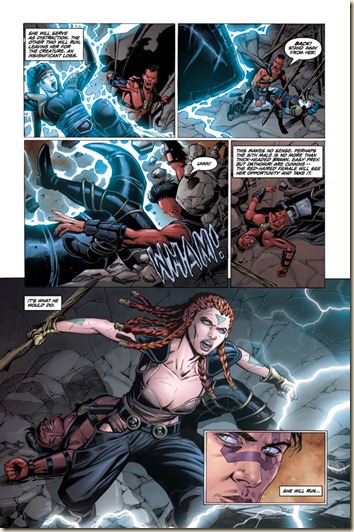 It’s not the best ending, but I’m curious about where they’ll take the series next. I hope we’ll see the Je’daii lose the apostrophe, develop into the warriors we know from other series.

This is a good series, certainly, but it is by no means the best of Dark Horse’s Star Wars titles. If you love the franchise, then definitely you’ll like this, but if you’re an enthusiast and are just looking for solid stories in the Star Wars universe, I wouldn’t recommend this as a starting point. 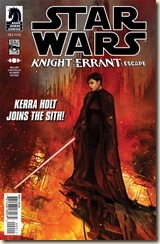 Working with a team of Sith reconnaissance troops searching for a powerful relic, Jedi Knight Kerra Holt is getting a firsthand look at the battles between warring Sith lords. Witnessing all the destruction is making her have second thoughts about her mission, but painful memories push her forward, overriding her conscience. Kerra is falling deeper into the world of the Sith — will she be able to climb out?

This issue kicks off with Kerra’s history with Odion, and tells of how ten years ago the Sith lord murdered her family – thereby providing the motivation for this five-issue story-arc. While searching for the relic, Kerra is confronted by someone else from her past, learning more of the fate of her parents and their part in concealing the relic from all Sith. 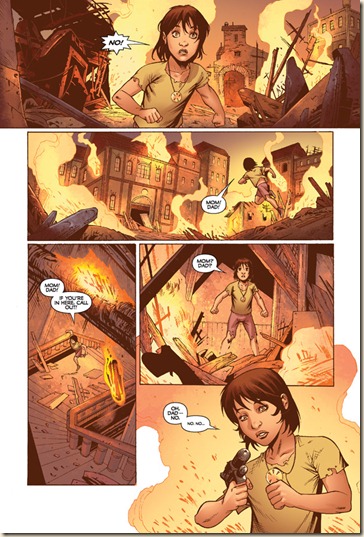 There’s an interesting comment early on, which I thought a little strange: “For a planet of many religions, Sarrassia has known little peace. Its feuding sects warred long before the Rise of the Sith.” It’s a strange statement because multiple religions (as we know from reality) often give rise to conflict. It’s just an oddly-phrased observation that stood out for me.

The story moves along quite nicely, and it’s certainly one of the better-written Star Wars comics. I’m looking forward to seeing how this develops. Having seen some of the covers for later issues, I have an idea, and I think it’s going to be very cool indeed. 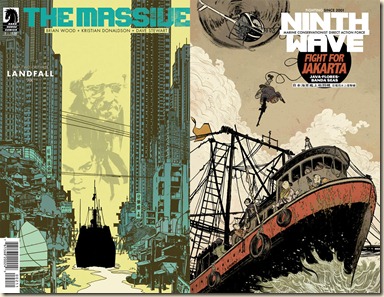 Hidden from pirates in the ice and fog of the Bering Sea, the crew of the Kapital weigh the risk of detection against the need to rescue their missing crewmates. Revealed are details about the events of the crash, including the Kapital’s resupply visit to an underwater Hong Kong and the new city that has, literally, grown out of the debris.

This is a really interesting series. Asking the question of what it means to be an environmental activist in a “post-war, post-Crash, post-disaster, post-everything world”. The “Massive” of the title is the sister-ship to the Kapital, piloted by our protagonists. 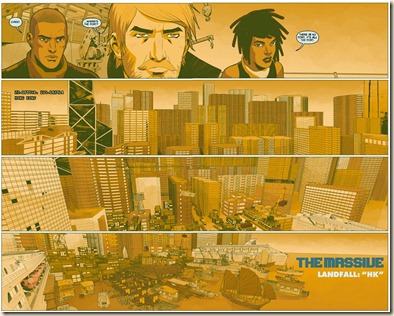 In this second issue, the story is split between two timelines, as well as sprinkled with more information of just how devastating the bizarre Crash was. There’s a flashback to when the Kapital made landfall in what remains of Hong Kong (above) – it still looks normal, but the change in sea-level has caused some interesting problems, and a huge construction project is underway, building a new border around the remains. It also seems pretty deserted, although not without its dangers. The second timeline is the “present”, in which the crew of the Kapital are still hunting for the Massive. In this issue, they get a false alarm.

The story seems focused on catching us up, at this point, so the main storyline of the hunt for the Massive isn’t exactly moving ahead too quickly. This is no bad thing, given the radical changes that have been wrought on the world.

This series is only reinforcing my respect of Wood, and I continue to love his work. Very highly recommended, and a must for fans of DMZ. 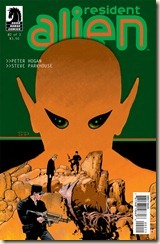 A stranded alien bides his time in the sleepy town of Patience, USA. Living undercover as a semi-retired doctor, his only hope is to stay off humanity’s radar until he can be rescued. When he’s pulled into a surprising murder mystery by the town’s desperate mayor and struggling police chief, Dr. Harry Vanderspeigle learns more about the human condition than he ever wanted to. He also finds police procedural work to be oddly appealing, and it’ll certainly kill time until he’s found.

This is a really quirky, interesting comic. With only one more issue, I’m not sure how it’s going to be wrapped up, but I’m also sad that it is going to end. It’s a gently-paced crime thriller, but it just so happens that the town’s doctor is a stranded alien… 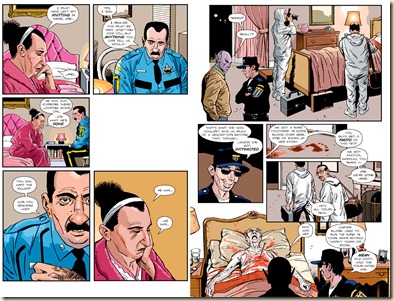 I really like this title, and if you’re after something different and well-written, then I’d definitely recommend this mini-series.