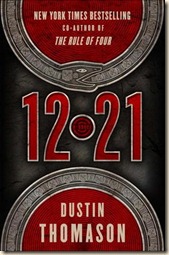 It’s the end of the World as we know it!

For decades, December 21, 2012, has been a touchstone for doomsayers worldwide. It is the date, they claim, when the ancient Maya calendar predicts the world will end.

In Los Angeles, two weeks before, all is calm. Dr. Gabriel Stanton takes his usual morning bike ride, drops off the dog with his ex-wife, and heads to the lab where he studies incurable prion diseases for the CDC. His first phone call is from a hospital resident who has an urgent case she thinks he needs to see. Meanwhile, Chel Manu, a Guatemalan American researcher at the Getty Museum, is interrupted by a desperate, unwelcome visitor from the black market antiquities trade who thrusts a duffel bag into her hands.

By the end of the day, Stanton, the foremost expert on some of the rarest infections in the world, is grappling with a patient whose every symptom confounds and terrifies him. And Chel, the brightest young star in the field of Maya studies, has possession of an illegal artifact that has miraculously survived the centuries intact: a priceless codex from a lost city of her ancestors. This extraordinary record, written in secret by a royal scribe, seems to hold the answer to her life’s work and to one of history’s great riddles: why the Maya kingdoms vanished overnight. Suddenly it seems that our own civilization might suffer this same fate.

With only days remaining until December 21, 2012, Stanton and Chel must join forces before time runs out.

The Mayan calendar said the world would end in 2012. So, naturally, there have been a ton of novels working with that premise cropping up all over the place for the past two years (at least). This is probably one of the higher-profile options, given how successful Thomason’s co-authored The Rule of Four was.

I picked this book up at BEA 2012, and decided to read it on my epic bus journey from New York to Toronto (that is truly epic if you’re not from North America). The fact that I managed to read the whole thing over those hours is a testament to both the pacing and Thomason’s prose. However, despite how easy it was to get through, the novel was not without some weaknesses.

We get a lot of detail in the narrative, which is for the main an excellent thing. This sort of novel requires plenty of explanation, but sometimes the detail becomes excessive (especially in describing mundane things). The balance of exposition is predominantly very good, but at times I wondered why I needed to know the past two-to-three pages of detail that seemed irrelevant. Some of these passages weren’t even throwing out red herrings, which could have been explained and accepted.

Take, for example, the translations of the Codex. These are definitely an interesting diversion, as they reveal more detail of the brutality of the Mayan religion and society. However, they also feel a little like a distraction – mainly because a couple of them are very long, and feel like they’re spinning things out, rather than moving the story along properly. Having said that, when we finally discover the extent of this particular Mayan city’s religious degeneration... Well, it’s pretty horrifying, and I was hooked, eager to discover how this historical account tied in to the main, present-day narrative.

I did like how Thomason links the Mayan calendar (the Long Count) to the prion disease that emerges in Los Angeles. It’s a little far-fetched, but then it’s supposed to be. I think the author did a good job of making its arrival believable, too. There is plenty of good use of real-world science in the novel, and Thomason comes up with plausible Mayan interpretations of the same things, given they are coming from a culture that lacked the modern science and understanding we have today. Insomnia’s centrality to the disease was especially interesting to me, as someone who has frequent bouts of it. After the outbreak, we are also treated to plenty of social commentary and discussion of the human condition, the extent to which people will go to save their loved ones and so forth.

“To be desperate enough to do unthinkable things to feed your family is to be human. Since the beginning of history, people have done what they had to do to survive.”

Thomason writes very nice prose – it’s quick and fluid, and pulls us along nicely. He also has a good sense for turning the occasional good phrase (referring to the “metastasizing press” outside a hospital, after the prion disease is first announced). His characters are pretty good, if typical of the genre and (sadly) not overly complex. There is some character development as the novel goes forward, but really not enough to allow us to get to know them.

Despite the things I enjoyed about the novel, there remains something about it that feels slightly off, or flat. It’s still enjoyable, and I zipped through it, when I wasn’t gazing out at the tarmac, trucks or trees (that’s ALL there is between New York and Toronto!). There is, however, a distinct lack of something. I’d say passion, but it’s not really that kind of novel. That could be part of the problem, of course – there’s a dearth of emotion in the text, and it felt rather clinically constructed. Everything seemed like it was methodically placed because thrillers require this or that element to be there. “Bloodless” is the phrase that kept cropping up in my mind while reading it.

The novel does, however, end on a hopeful note.

If you are a fan of authors like James Rollins, Matthew Reilly and their ilk, then I’d certainly recommend 12.21. However, I think Rollins and Reilly have a much better skill for marshaling the thriller side of the genre. They are able to inject (and play with) just as much, if not more, science, but they have a better sense for how to make the plot gripping and to get readers invested in the characters and story. Thomason is almost there, though, so maybe his next novel will be better?

As always with these types of novels, the author’s note was interesting (if short).

This will likely be among the better 2012-Mayan-Apocalypse novels out there, and it is pretty enjoyable. If you’re after something in this genre, then this should suit your needs.

P.S. As a side-note, huge points to Thomason for name-checking Adnams Broadside – even I hadn’t heard of that until the college bar started serving it…