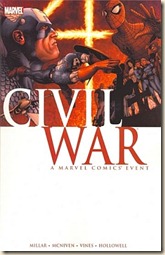 One of Marvel’s most popular cross-title Events

Whose side are you on? A conflict is brewing that threatens to pit friend against friend, brother against brother and all it will take is a single misstep to cost thousands their lives and ignite the fuse! As the war claims its first victims, no one is safe as teams, friendships and families begin to fall apart and the Marvel Universe super heroes go to war against each other.

Collecting the seven issues in the Civil War mini-series, which had tie-in issues across the Marvel comics line, this is a real show-stopper of a story. It’s not perfect, by any means, but it is an engaging and fast-paced read. It’s also much better than The Ultimates (also written by Millar). Gorgeous artwork, and warring super heroes make for a very good book – more so, when you consider that it is really very reasonably priced in the UK. Well worth reading.

The story kicks off with some stupid, reality TV “heroes”, the New Warriors, going after a band of super-villains, not realising just how powerful one of them – Nitro – actually is. Much destruction ensues. The event is devastating to Stamford, Connecticut, and public opinion rapidly turns sharply against people with super-powers or anyone wearing a vigilante costume. (There’s an indictment of reality TV and the obsession with sensation and ratings here, too. Better done than in the New 52 Green Lantern…) 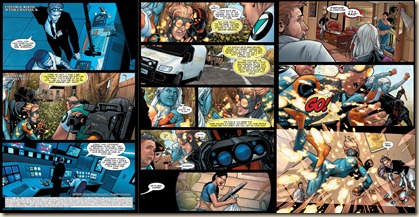 The US government gets off its collective butt and works to pass super-hero registration legislation. Even before the vote, a group of super heroes gather to discuss the imminent legislation and what it will mean for them and how they operate. We get a good balance of pro- and con- arguments, as well as the importance of the secret-identities (especially for some characters, like Spider-Man, who have worked harder than others to keep their real identities secret and their loved ones protected). As one can imagine, there is plenty of allusion to past initiatives to catalogue certain people and make Lists (McCarthyism being the most obvious).

Captain America is the first big-name hero to resist the new legislation. When Maria Hill, the new head of S.H.I.E.L.D., approaches him and basically threatens him (a poor recruitment tactic with Cap), he has the expected negative reaction:

“Don’t play politics with me... Super heroes need to stay above that stuff or Washington starts telling us who the super-villains are.”

Things escalate almost immediately, as Hill puts the screws to Cap and basically twists him into a position where he becomes the first rebel. Events move very quickly but, like the current Avengers vs. X-Men Event, the story isn’t totally smooth – other titles were carrying parts of the story, which means some events in here seem to jump forward or come slightly out of nowhere (I won’t spoil which things in particular).

It’s interesting to see how precarious the two sides’ alliances are – one new member here or there, and things get complicated and tempers flare. For example, when the Punisher chooses a side, and that side doesn’t exactly welcome him with open arms. As it turns out, the distrust isn’t wholly undeserved. Some readers will have a little difficulty with the portrayal of certain characters, who can be far more vicious and willing to lay into their former colleagues and friends. 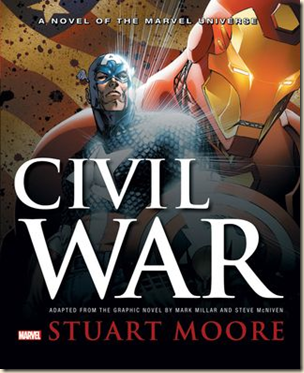 Civil War has recently been novelised, too. I don’t know why.

This story is far more brutal than AvX. I wish Marvel had taken some more queues from Millar’s more visceral story for their latest Event. AvX, to me, has been playing things far too safe in the opening issues. Admittedly, I’ve only read #0-4 and AvX:VS #1-2 of the projected twelve and six, respectively. Instead, I am waiting for the collection to hopefully get a more complete story, and because the drips-and-drabs monthly installments were getting on my nerves.

I have one really silly niggle with this story, and it’s actually to do with one of the character’s outfits: Spider-Man’s new suit, designed for him by Tony Stark, only has three mech-arms. This gives him seven “limbs”. Not eight… Like I said, a minor thing. But still… It irritated me.

Thor’s arrival on the scene is pretty stunning and explosive. It also seriously complicates things, as some heroes start to question their chosen allegiance. A stark line is drawn between Captain America and Iron Man, who really morph into true zealots for their respective causes... 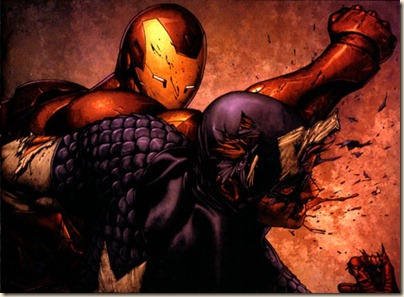 The ending is very sudden, which I thought was a little disappointing. Everything is wrapped up so neatly, save for Captain America’s fate in the aftermath. It felt a little bit like the team had lost steam and just decided to wrap it up. They probably should have taken a couple more issues to wind it down properly, to introduce us to the new world the war created. Given what happens to Cap, I’m very eager to get back into Ed Brubaker’s series after reading this (there is a Captain America: Civil War book, followed by a rather momentous Cap storyline...).

As you can see from the examples included in the text, the artwork is absolutely fantastic artwork – it’s really clear, crisp and vivid. It’s quite stunning in some panels and on some pages, and the fact that it runs throughout the seven issues suggests a massive amount of care and attention was lavished on the artwork, and the whole team has created one of the best-looking books I’ve read. Superb.

So, to sum up: this is a very enjoyable read, and a book full of gorgeous and eye-catching artwork. The writing is pretty good, and much better than a few of the other Event scripts I’ve read. Millar’s done a really good job on the story, but it does throw out some questions – for example, where does the story go from here? I’m not sure how the ending was incorporated into the Marvel line of comics, but it suggests everything became far more complicated and saturated… Which I’m sure was a bad idea.

Civil War was a momentous event in Marvel story history, so I would certainly recommend it to anyone interested in learning more about how the Marvel series got to where they are now. I only picked this up because the next book in the Captain America series I’ve been reading and loving was the aforementioned Civil War installment, but I’m glad I did. One day, I’ll get around to reading the rest of the Civil War tie-in volumes. But I’m not in any rush to do so.

Posted by Civilian Reader at 2:17 PM