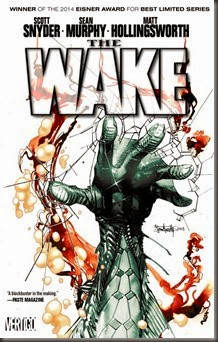 When Marine Biologist Lee Archer is approached by the Department of Homeland Security for help with a new threat, she declines, but quickly realizes they won’t take no for an answer. Soon she is plunging to the depths of the Arctic Circle to a secret, underwater oilrig filled with roughnecks and scientists on the brink of an incredible discovery. But when things go horribly wrong, this scientific safe haven will turn into a house of horrors at the bottom of the ocean!

This is a tricky one to review. This is the whole ten-issue run of the series, which means a lot happens. The multiple timelines, the expansive scope of the story… There’s a lot crammed into this book. It’s the most ambitious of Snyder’s stories that I’ve read, and while I found it excellent on a number of levels, the second half really let the book down.

The first half of the book is a great, atmospheric, horror-infused tale of under-the-sea beasties and mystery. The artwork is particularly awesome, too, with great use of negative space and deep, deep shadows to really create an air of suspense and intensity. Part 1 takes us up to the catastrophe hinted at in the prologue, as a group of marine scientists (and a high-tech poacher) are brought together to investigate a creepy-looking mermaid: 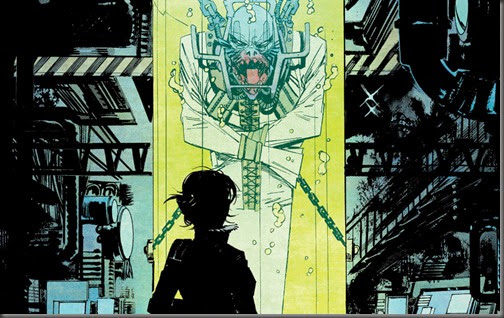 Naturally, everything goes wrong. Otherwise, the second part of this global catastrophe tale would be rather tricky to explain…

Unfortunately, Part 2 was nowhere near as strong as the first. True, I really liked the modern-take on a Waterworld-esque post-apocalypse. The main character in this timeline is interesting, too. However, the story starts to unravel in its expansiveness. There’s so much going on, as Snyder weaves this massive global-history-spanning mystery. Events lurch forward at times, with a fair number of surprise reveals that seem to come out of nowhere (and not always in a good way). I ended up feeling a bit frustrated, as new elements were thrown at me seemingly out of nowhere. I was sadly disappointed. This had so much potential, and I think Snyder et al have done a competent job of executing it for the most part. But ultimately the ending felt a bit flat. 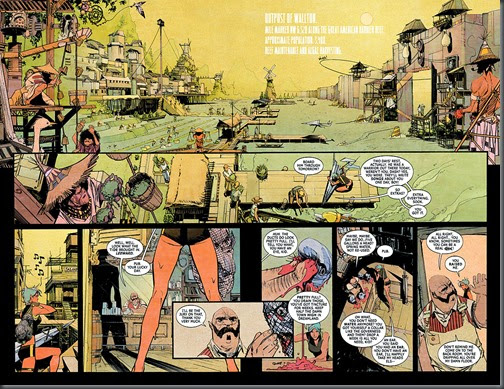 An ambitious global catastrophe story, but sadly one that doesn’t quite live up to expectations. It’s still well-worth reading, but I think Snyder has done better. Maybe it’s a case of the ten issues not being enough to contain just how much story the team has come up with.

I get the feeling that The Massive (published by Dark Horse Comics and written by Brian Wood) might be a better post-environmental collapse comics series.

Posted by Civilian Reader at 7:13 PM