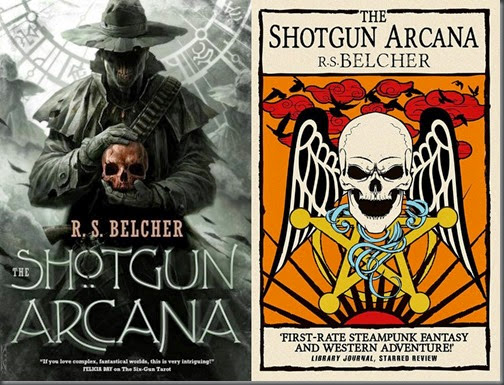 Two very cool, very different covers for R.S. Belcher’s follow-up to The Six-Gun Tarot. On the left, the US cover (Tor Books); and on the right, the UK cover (Titan Books). Here’s the US synopsis:

1870. A haven for the blessed and the damned, including a fallen angel, a mad scientist, a pirate queen, and a deputy who is kin to coyotes, Golgotha has come through many nightmarish trials, but now an army of thirty-two outlaws, lunatics, serial killers, and cannibals are converging on the town, drawn by a grisly relic that dates back to the Donner Party… and the dawn of humanity.

Sheriff Jon Highfather and his deputies already have their hands full dealing with train robbers, a mysterious series of brutal murders, and the usual outbreaks of weirdness. But with thirty-two of the most vicious killers on Earth riding into Golgotha in just a few day’s time, the town and its people will be tested as never before — and some of them will never be the same.

I really want to read this series. I have no idea why I haven’t done so yet… I shall make that a goal for the rest of 2014. Watch this space…

You can read an excerpt from The Shotgun Arcana over on Tor.com.

The first book in this series, The Six-Gun Tarot had equally interesting covers, but I must say in that case the UK cover was by far the best. Here’s the US and UK covers, side-by-side: 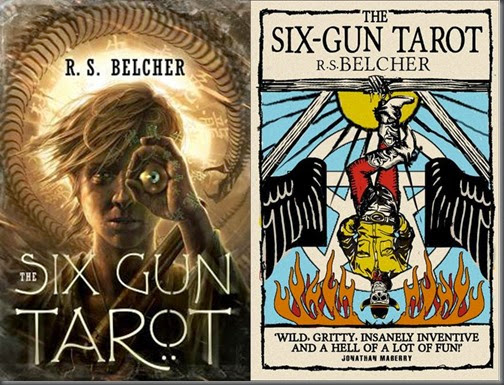